Pattaya Exhibition and Convention Hall (PEACH) [1] is a multipurpose event venue of the award-winning Royal Cliff Hotels Group,[2] in Pattaya, Thailand. As one of the largest and most up-to-date convention centres in Thailand, PEACH has hosted numerous events ranging from prestigious political conferences to spectacular advertising festivals.[3]

Royal Cliff Hotels Group has always been the setting to some of the most important meetings in the region ranging from the Cambodian Peace Talks in 1991 to the drafting of the new Thai constitution in 1997.[4] With the rapid growth of the MICE (Meetings, Incentives, Conferencing, Exhibitions) industry in Thailand and strong interest in Pattaya as a conference destination, the Resort seized the opportunity to construct a modern stand alone event centre benefiting the excellent views of the sea. Thus in 1999 the sophisticated Pattaya Exhibition and Conference Centre (PEACH) was born to be officially inaugurated one year later by Privy Councillor HE Gen. Prem Tinsulanonda.

PEACH is a low-rise complex set in tropical surroundings with a view of the Gulf of Thailand. In early 2008, the Royal Cliff Hotels Group decided to expand PEACH, increasing its capacity to 6,943 m2 (previously 4,851 m2) and occupying 6 levels. The centre offers complete versatility and flexibility for any event being able to host large scale conventions for up to 8,000 delegates in theatre-style seating or 3,640 persons in a column-free setting. The main hall is highly flexible and can be divided into 4 large zones or even into 9 smaller sections. In addition there are 18 meeting rooms with various capacities ranging from 90 m2 to 286 m2.[5] 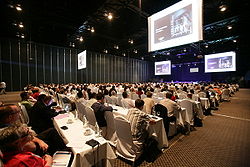