The PT-91 Twardy ("hard","tough" or "resilient") is a Polish main battle tank. It is a development of the T-72M1 and first entered service in 1995. The PT-91 was designed at the OBRUM (OBRUM for Ośrodek Badawczo-Rozwojowy Urządzeń Mechanicznych – Polish for Research and Development Centre for Mechanical Appliances) and is produced by the Bumar Łabędy company - part of Polish military consortium - Bumar Group. Changes from the T-72 include a new dual-axis stabilized fire-control system, reactive armour, a more powerful engine, transmission and new automatic loader. Unlike many other T-72 upgrades the Polish Army PT-91s are upgraded using elements created almost exclusively by domestic companies (this includes new engine, fire control system and all communication system elements). Many of those elements were used to upgrade existing fleets of T-72 tanks in countries like in Czech Republic - T-72M4Cz, Georgia - T-72SIM-1 or India - T-72 Ajeya Mk2.

In the late 1980s the Polish Army modernized all of its obsolete T-55 tanks to the T-55AM Mérida standard. The successful conversion convinced the General Staff that similar modernization could also be applied to other Soviet-designed tanks made in Poland and used by the Polish Armed Forces. In late 1988 it was decided to prepare a project of modernization for the T-72M1 design - using the experience from production of licenced T-72M (obiekt 172M-E3 - Polish army designation T-72), T-72M1 (obiekt 172M-E5), T-72M1K (Polish army designation T-72M1D).

The Gliwice-based Research and Development Centre of Mechanical Systems OBRUM (Polish: Ośrodek Badawczo-Rozwojowy Urządzeń Mechanicznych) was chosen as the main design bureau. However, initially the work progressed at a very slow pace, mainly because the Polish General Staff was also considering the purchase of a newer version of T-72 (T-72S) or the modern T-80.

After the political changes of 1989 and the dissolution of the Soviet bloc, Polish-Soviet talks on purchase of modern tanks came to a halt and the design of a new Polish tank gained momentum. The first design proposed by the bureau was code-named Wilk (Polish for wolf), but the project was cancelled. Instead, the priority was shifted to a different project named Twardy. The basic aim of the conversion of T-72 was to adapt it to the reality of modern warfare and fix its most visible deficiencies. Among those were low mobility, insufficient armour, lack of a fire control system and poor stabilisation of the main gun, which resulted in poor firing accuracy. An additional problem was lack of passive night vision aiming systems.

Starting from July 1991 T-72 modernization programs were implemented by the Bumarcombine which had been producing T-72s under Soviet license. The modernized main battle tank was designated PT-91 Twardy. From base modification it differs in increased protection, fire control system and engine. In 1993 the Polish Defense Ministry ordered 20 PT-91 tanks to be used for field trials and Armed Forces tests.

The main battle tank's protection from high-explosive anti-tank (HEAT) projectiles and missiles is increased by the new Erawa dynamic armor developed by the Poland Military-Technical Institute. This protection consists of 394 tiles with explosives, detonating in case of a direct hit. The tiles cover 9m2 on the tank. 108 tiles are placed on the turret, 118 on the hull and 84 on each side's anti-HEAT screens. The Twardy uses steel anti-HEAT screens instead of the rubber used on the T-72. Erawa's main difference from the Soviet analogs is that Erawa's containers fit almost without gaps while on the Soviet modernised T-72 gaps reach 10 - 15 mm noticeably decreasing defense effectiveness. There are two Erawa modifications: Erawa-1 and -2, differing in weight of the explosives.

Experiments showed that the Erawa dynamic defense decreases the high-explosive jet impact depth by 50 - 70% and penetrator (APFSDS) projectiles by 30 - 40%. Furthermore, explosive containers don't detonate when hit by shot of up to 30 mm calibre, shell or mine fragments, or when covered in burning napalm or petrol.

The Twardy is armed with the same 125 mm smoothbore gun 2A46 used in the T-72, fitted with an automatic reloading mechanism which reduced the tank crew by one as it replaced the gun loader, and gave a rate of fire of 8 to 10 rounds per minute. Additional armament comprises the 7.62 mm PKT coaxial general purpose machine gun and 12.7 mm NSVT anti-aircraft heavy machine gun. The PT-91 has a thermosmoke device generating smoke screens from fuel and 24 grenade launchers fitted with smoke or anti-personnel frag grenades.

The modernization of the fire control system started by replacing the earlier used Soviet two plane stabilizer 2Є28M with a new stabilizer developed in Slovakia. It has an electronic information block showing the tank's technical condition. Furthermore it informs the commander when effective sighted fire becomes ineffective because of an excessively high cross-country speed or other reasons.

The driver uses the control and diagnostic complex US-DK-1 controlling the tank's main systems and displaying information on a monitor. The driver's night sight was replaced by the Radomka passive night sight.

The modernized tank's increased weight led the developers to add a more powerful engine. It is a 12 cylinder S-12U diesel engine, a modernized version of the Soviet V-46-6 produced in Warsaw by PZL-Wola (850 hp instead of 780). The main improvement is the modernized fuel and air injection system. This caused a noticeable decrease in the tank's road endurance. The latest Twardy variants have the 1000hp S-1000 engine with a turbocharger.

Development variant with PZL-Wola S-1000 1,000-hp engine with mechanic transmission and number of other minor changes. Used for trials and as demonstrator on military exhibitions.

(Z for Zmodernizowany – literally Modernized) Further development with SAGEM Savan-15 fire control system, according to life fire test Savan-15 has only minor advantage in accuracy over Drawa.[7] The biggest advantage was a new gun stabilization system that gave the tank a significant increase in accuracy when the tank is on the move. Later it was used as a base to develop the PT-91M. This variant has won a number of stress tests in Malaysia over T-90, T-84 and K1 tanks, and has won the competition for a new Malaysian MBT. Only one prototype was made.

(E for Export) - renamed prototypes of PT-91M used as demonstrators of export variant showed on military exhibitions. PT-91E is a first prototype named SP1 (it is same vehicle as shown on military parade in Kuala Lumpur in 2005), PT-91Ex is a second prototype named SP2. [3] Both vehicles faced number of tests in Malaysia SP1 was used for traction tests and has made 7000 km offroad in Malaysia, SP2 2000 km and 500 shoots from main cannon.[5] Very similar to PT-91M, offered for export to other countries. 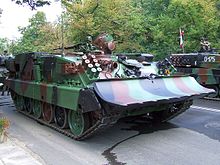 (WZT for Wóz Zabezpieczenia Technicznego – literally Technical Support Vehicle) – family of armoured recovery vehicles based on the PT-91/T-72 tank hull. Probably most popular T-72 based ARV on the world with over 400 vehicles delivered to the clients. It is armed with a 12.7 mm (½ in) machine-gun fitted to the commander’s hatch. Standard equipment includes: crane with telescopic jib that can lift a maximum load of fifteen tonnes, front-mounted stabilizing dozer blade, main and secondary winches.

(PMC for Pomocniczy Most Czołgowy – lit. Auxiliary Tank Bridge) – Polish Armoured Vehicle Launched Bridge is a close support bridge layer. The PMC-90, developed on the basis of PT-91, is able to carry out missions required to operations of combat forces.

(PZA for Przeciwlotniczy Zestaw Artyleryjski – lit. AA Artillery System; “Loara” means “Loire (river)” in Polish) – antiaircraft artillery system is a Polish armoured radar directed Self Propelled Anti-Aircraft Gun system developed in the late 1990s. Based around the Twardy chassis, this system mounts an armoured turret holding two Oerlikon KDA 35 mm cannons linked to a radar fire control system. It was planned that it would work closely together with PZR “Loara” (anti-aircraft rocket system) vehicles built on the basis of the PZA Loara but that project is currently on hold. The Loara is an autonomous fire unit capable of performing its tasks independently or acting as a component of a wider air defense system. The system has two radars, 3D search radar and engagement radar. The search radar has a range of 26 km (16 mi) and is capable of tracking and identifying up to 64 targets at once. The radar system can also be operated on the move, refreshing its data every second. The system also has a laser range-finder, TV and FLIR cameras giving the system both all-weather day/night capabilities and the ability to operate entirely passively in a heavy ECM environment. The system also has a reaction time less than 10 seconds. The system can engage aircraft flying at altitudes from very low altitudes up to 5000 m (16,500 ft), and flying at speeds up to 500 m/s (1,125 mph). It is also effective against lightly armored ground and naval targets.

(Gepard is Polish for Cheetah) sometimes known as PT-2001 – another modification project of a Polish main battle tank prepared as future modernisation programme for T-72 family, the programme was called for, as first PT-91 proposition fell below requirements. Two propositions were submitted, one by Bumar who provided a project with modified frontal armor, different mortar and sporting Leclerc - like turret with 2A46 main gun. OBRUM's competing project had new front and sides reactive armor and L-44 main gun.

Despite considerable improvements, neither was approved for financial reasons, and no prototypes were built, however design experience helped with new PT-91 versions. 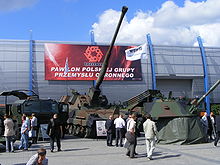 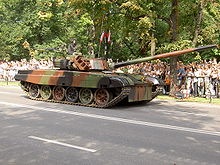 In April 1999, India ordered 44 WZT-3 armored recovery vehicles, which was followed by another two orders in April 2002 ( 80 vehicles), and in July 2005 (228 vehicles) – for a total of 352 WZT-3 armored recovery vehicles ordered. These vehicles are used to support the T-72 and T-90 MBT. [18] Deliveries began in 2001, and India is planning to upgrade its Ajeya Mk1 tanks (local name for T-72M1) to Ajeya Mk2 standard, with some elements from PT-91, such as the SKO-1T Drawa-T fire control system and the PZL-Wola S-1000 engine.[citation needed] In October 2011, Indian Defense Ministry announced that the state owned BEML will produce an additional 204 WZT-3 armored recovery vehicles - taking the total till 2011 to 556 vehicles.[19] The Ministry also clarified that no Global Tender was floated since it was a repeat order.

Georgian army upgraded T-72SIM-1 tanks are using Drawa-T fire control system, a development of the fire control system on PT-91. The FCS is equipped with laser range finder and thermal imaging sensor. The system is slightly different from the one used on polish PT-91s, commander is using and LCD screen instead of the eyepiece (the gunner eyepiece is exactly same as on PT-91). The Thermal Elbow Sight thermal imaging sensor used in Georgian tanks is of the same (Israeli) origin as the one used on PT-91 but the external housing is different. [20]