The first photograph was an image produced in 1826 by the French inventor Nicéphore Niépce on a polished pewter plate covered with a petroleum derivative called bitumen of Judea but for centuries images had been projected onto surfaces - artists used the camera obscura and camera lucida to trace scenes as early as the 16th century. These early "cameras" did not fix an image, but only projected images from an opening in the wall of a darkened room onto a surface, turning the room into a large pinhole camera.

The advent of photography, from the Ancient Greek words φως phos ("light"), and γραφη graphê ("stylus", "paintbrush") or γραφω graphō (the verb, "I write/draw"), together meaning "drawing with light" or "representation by means of lines" or "drawing", has gained the interest of scientists and artists from its inception. Scientists have used photography to record and study movements, such as Eadweard Muybridge's study of human and animal locomotion (1887). Artists are equally interested in these aspects but also try to explore avenues other than the photo-mechanical representation of reality, such as the pictorialist movement. Military, police and security forces use photography for surveillance, recognition and data storage. Photography is used to preserve favorite memories and as a source of entertainment. 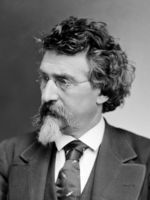 Mathew B. Brady (ca. 1823 – January 15 or January 16[1], 1896) was a celebrated photographer whose rise to prominence occurred largely in the years preceding and during the American Civil War. Following the conflict, a war weary public became disinterested in seeing photos of the war, and Brady’s popularity and practice declined.

Brady's efforts to document the Civil War on a grand scale by bringing his photographic studio right onto the battlefields earned Brady his place in history. Despite the obvious dangers, financial risk, and discouragement of his friends he is later quoted as saying "I had to go. A spirit in my feet said 'Go,' and I went." His first popular photographs of the conflict were at the First Battle of Bull Run, in which he got so close to the action that he only just avoided being captured.

JPEG (pronounced JAY-peg; IPA: [ˈdʒeɪpɛg]) is a commonly used standard method of compression for photographic images. The name JPEG stands for Joint Photographic Experts Group, the name of the joint ISO/CCITT committee which created the standard. The group was organized in 1986, issuing a standard in 1992 which was approved in 1994 as ISO 10918-1. JPEG should not be confused with MPEG, the Moving Picture Experts Group, which produces compression schemes for motion pictures.

JPEG provides for lossy compression of images (although there are variations on the standard baseline JPEG which are lossless). The file format which employs this compression is commonly also called JPEG; the most common file extension for this format is .jpg, though .jpeg, .jfif, .JPG, and .JPE are also used.