Location of Norway on the world map 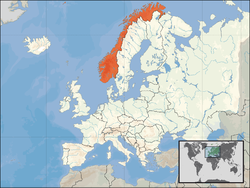 Norway, officially the Kingdom of Norway, is a country and constitutional monarchy in Northern Europe that occupies the western portion of the Scandinavian Peninsula. It is bordered by Sweden, Finland, and Russia. The distance between the northern and southern parts of Norway is considerable compared to east-west distances. The country's extensive coastline along the North Atlantic Ocean is home to its famous fjords.

The Kingdom of Norway also includes the Arctic island territories of Svalbard and Jan Mayen. Norwegian sovereignty of Svalbard is based upon the Svalbard Treaty, but this does not apply to Jan Mayen. Bouvet Island in the South Atlantic Ocean and claims for Peter I Island and Queen Maud Land in Antarctica are also external dependencies, but these are not part of the Kingdom.

Since World War II, Norway has experienced rapid economic growth, and is now amongst the wealthiest countries in the world, with a fully developed welfare system. This economic progress is caused in part by the exploitation of oil and gas reserves off coast. Norway was ranked highest of all countries in human development from 2001 to 2007, and then again in 2009. It is rated the most peaceful country in the world in a 2007 survey by Global Peace Index.

The Kammerlader, or chamber loader, was the first Norwegian breech loading rifle, and among the very first breech loaders adopted for use by an armed force anywhere in the world. A single shot black powder rifle, the kammerlader was operated with a crank mounted on the side of the receiver. This made it much quicker and easier to load than the weapons previously used. Kammerladers quickly gained a reputation for being fast and accurate rifles, and would have been a deadly weapon against massed ranks of infantry. The kammerlader was introduced in 1842, and it is thought that about 40,000 were manufactured until about 1870. While first flintlock breech loading rifles, such as Ferguson, were launched decades before 1842 Norway was the first European country to introduce breech loaders on a large scale throughout its army and navy. Though United States was the first in the world with M1819 Hall rifle. The kammerladers were manufactured in several different models, and most models were at some point modified in some way or other. The kammerladers were phased out as more modern rifles were approved for use. They were either modified for rimfire cartridges, sold off to civilians or melted for scrap. Rifles sold to civilians were often modified for use as shotguns or hunting firearms. Today it is hard to find an unmodified kammerlader, and collectors often pay high prices for them.
edit 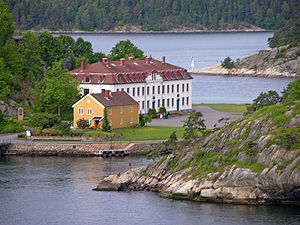 The Oslofjord (Norwegian: Oslofjorden) is a bay in the south-east of Norway, stretching from an imaginary line between the Torbjørnskjær and Færder lighthouses near Langesund in the south to Oslo in the north. The bay is divided into the inner (indre) and outer (ytre) Oslofjord at the point of the 17 km long and narrow Drøbaksundet.

Harald V (born February 21, 1937) is the King of Norway. He succeeded to the throne of Norway upon the death of his father Olav V on January 17, 1991. The son of the then Crown Prince Olav and of Princess Märtha of Sweden, Harald was born at the Crown Prince Residence at Skaugum, Asker, near Oslo. Harald became the first Norwegian-born prince since the birth of Olav IV in 1370. Harald V is the formal head of the Church of Norway and the Norwegian Armed Forces. As he is the great-grandson of King Edward VII, he is also in the line of succession to the British throne. He is a second cousin to Queen Elizabeth II. King Harald has two sisters, Princess Ragnhild, Mrs. Lorentzen (born 1930), living in Brazil, and Princess Astrid, Mrs. Ferner (born 1932), living in Oslo.
edit