Global warming is the increase in the average temperature of the Earth's near-surface air and the oceans since the mid-twentieth century and its projected continuation. Global surface temperature increased 0.74 ± 0.18 °C (1.33 ± 0.32 °F) during the 100 years ending in 2005.[1][A] The Intergovernmental Panel on Climate Change (IPCC) concludes that anthropogenic greenhouse gases are responsible for most of the observed temperature increase since the middle of the twentieth century,[1] and natural phenomena such as solar variation and volcanoes probably had a small warming effect from pre-industrial times to 1950 and a small cooling effect from 1950 onward.[2][3] These basic conclusions have been endorsed by more than 40 scientific societies and academies of science,[B] including all of the national academies of science of the major industrialized countries.[4][5]

Climate model projections summarized in the latest IPCC report indicate that global surface temperature will probably rise a further 1.1 to 6.4 °C (2.0 to 11.5 °F) during the twenty-first century.[1] The uncertainty in this estimate arises from the use of models with differing climate sensitivity, and the use of differing estimates of future greenhouse gas emissions. Some other uncertainties include how warming and related changes will vary from region to region around the globe. Although most studies focus on the period up to 2100, warming is expected to continue beyond 2100, even if emissions have stopped, because of the large heat capacity of the oceans and the lifespan of CO2 in the atmosphere.[6][7] 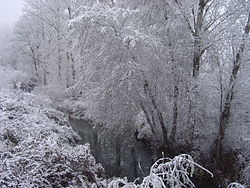 The Great Freeze refers to the winter of 1894-1895, especially in Florida where the brutally cold weather destroyed much of the nation's citrus crop.

There were actually twin freezes in Florida during this momentous season, the first in December 1894 and the second in February 1895. The first did not actually kill a lot of groves, but did cause them to produce new shoots. So, when the second, harder freeze came a few months later, the effects were even more devastating. All varieties of fruit (oranges, grapefruits, lemons, limes, etc.) blackened on the trees, and bark split from top to bottom.[1] These effects were felt as far south as the Manatee River, below Tampa.[2]

Up to 1895, the cheap abundance of semi-tropical citrus groves extended into northern Florida and were producing as much as 6 million boxes of fruit per year.[3] After the Great Freeze, however, production plummeted to just 100,000 boxes and did not break the 1 million mark again until 1901.[4] As a result, land values also dropped in the citrus growing areas from $1,000 per acre to as little as $10 per acre. Many compared the economic impact of the Great Freeze on Florida to the effects of the Great Fire on the city of Chicago.[5]

In the wake of the Great Freeze, many planters simply abandoned their Florida groves in search of frost-free locations in places as far away as Cuba, Puerto Rico, and Jamaica.[6]

Jean Baptiste Joseph Fourier (March 21, 1768 – May 16, 1830) was a French mathematician and physicist best known for initiating the investigation of Fourier series and their application to problems of heat flow. The Fourier transform is also named in his honour. Fourier is also generally credited with the discovery of the greenhouse effect.[1]

Fourier was born at Auxerre (now in the Yonne département of France), the son of a tailor. He was orphaned at age nine. Fourier was recommended to the Bishop of Auxerre, and through this introduction, he was educated by the Benvenistes of the Convent of St. Mark. The commissions in the scientific corps of the army were reserved for those of good birth, and being thus ineligible, he accepted a military lectureship on mathematics. He took a prominent part in his own district in promoting the French Revolution, and was rewarded by an appointment in 1795 in the École Normale Supérieure, and subsequently by a chair at the École Polytechnique. 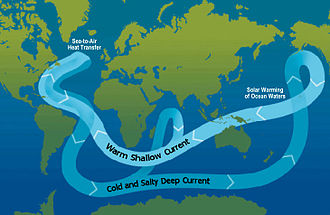 Ocean Circulation Conveyor Belt. The ocean plays a major role in the distribution of the planet's heat through deep sea circulation. This simplified illustration shows this "conveyor belt" circulation.


Cite error: There are <ref> tags on this page, but the references will not show without a {{Reflist}} template or a <references /> tag; see the help page.
Categories: