Family Guy is an American animated television series about a dysfunctional family in the fictional town of Quahog, Rhode Island. It was created by Seth MacFarlane for Fox Broadcasting Company in 1999. The show uses frequent "cutaway gags", jokes in the form of tangential vignettes that do not advance the story. Family Guy was canceled once in 2000, and again in 2002, but strong DVD sales and the large viewership of reruns on Cartoon Network's Adult Swim convinced Fox to resume the show in 2005. It is the first canceled show to be resurrected based on DVD sales.

Family Guy's first and second seasons were made starting in 1999 after the Larry shorts (its predecessor) caught the attention of the Fox Broadcasting Company during the 1999 Super Bowl commercial. Its cancellation was announced, but then a shift in power at Fox and outcry from the fans led to a reversal of that decision and the making of a third season, after which it was canceled again. Reruns on Adult Swim drove interest in the show up, and the DVD releases did quite well, selling over 2.2 million copies in one year which renewed network interest. Family Guy returned to production in 2004, making two more seasons (for a total of five) and a straight to DVD movie, Stewie Griffin: The Untold Story. The sixth season began airing in Autumn 2007, with a seventh season which aired in the Autumn of 2008, the eighth season in Autumn 2009 and the ninth season which began airing in Autumn 2010. In addition, Family Guy went into syndication in Autumn, 2007. Since its first debut, eight volume DVDs have been released.

Seth Benjamin Gesshel-Green (born February 8, 1974) is an American actor, comedian and television producer. He is known for his acting roles as Doctor Evil's son Scott in the Austin Powers series of comedy films and Daniel "Oz" Osbourne in Buffy the Vampire Slayer. He voices the character of Chris Griffin on Family Guy, and is the co-creator and producer of the stop motion comedy series Robot Chicken. Green appeared in several other movies, such as Rat Race, The Italian Job, and, as a child, Stephen King's It.

Green was born in Philadelphia, Pennsylvania, the son of Barbara (née Gesshel), an artist, and Herb Green, a math teacher. His first glimpse of fame occurred the moment he was born, as his birth was used in a pamphlet on natural child birth. Green was brought up Jewish and played a 1940s Jew in Woody Allen's movie Radio Days . In a 2000 interview he said "God is, to me, pretty much an idea. God is, to me, pretty much a myth created over time to deny the idea that we're all responsible for our own actions". 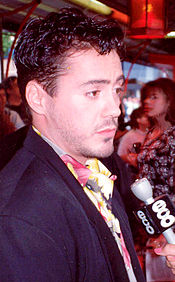 Robert John Downey, Jr. (born April 4, 1965) is an Academy Award-nominated and Golden Globe-winning American actor and musician. He became known during the late 1980s and early 1990s after a series of well-reviewed performances in Hollywood films. During a period of drug addiction in the late 1990s, Downey, Jr. continued his acting career, appearing on the television series Ally McBeal. Downey provided the voice of Lois' long-lost brother, Patrick on "The Fat Guy Strangler."

Lois Griffin (née Pewterschmidt) is a fictional character and is one of the protagonist of the animated comedy series Family Guy and the matriarch of the Griffin family. She is voiced by writer Alex Borstein and first appeared on television, along with the rest of the family in the 15-minute short on December 20, 1998. Lois was created and designed by series creator Seth MacFarlane. MacFarlane was asked to pitch a pilot to the Fox Broadcasting Company based on Larry and Steve, a short made by MacFarlane which featured a middle-aged character named Larry and an intellectual dog, Steve. After the pilot was given the green light, The Griffin family appeared on the episode "Death Has a Shadow". Lois is the mother of the Griffin family. With her husband Peter, she has had three children: Meg, Chris, and Stewie. Lois is often portrayed as a stereotypical television mother, despite her admitted drug use, prior gambling addiction and obvious kleptomania. She has appeared in other media relating to Family Guy—including a video game, commercials and books—and inspired an entire line of merchandise. Lois's distinctive New England accent originated from a character in a stage show that Alex Borstein had performed in, which was largely inspired by a relative who grew up in Long Island, New York.

North by North Quahog • Road to the Multiverse