Portal:Law of England and Wales

Portal:Law of England and Wales
edit

The Law of England and Wales Portal 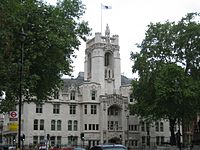 The Supreme Court
of the United Kingdom

English law is the legal system of England and Wales, and is the basis of common law legal systems used in most Commonwealth countries and the United States (as opposed to civil law or pluralist systems in use in other countries). It was exported to Commonwealth countries while the British Empire was established and maintained, and it forms the basis of the legal systems of most of those countries. England and Wales are constituent countries of the United Kingdom; Scotland and Northern Ireland have their own legal systems, although in some areas of law there are no differences between the jurisdictions. Whilst Wales has a devolved Assembly, its power to legislate is limited by the Government of Wales Act 2006.

English law is a mixture of common law, legislation passed by the UK Parliament (or subordinate legislation made under delegated authority) and European law. The essence of common law is that it is made by judges sitting in courts, applying their common sense and knowledge of legal precedent (stare decisis) to the facts before them. A decision of the highest appeal court in England and Wales, the Supreme Court of the United Kingdom, is binding on every other court in the hierarchy. Common law can be altered by Parliament. The oldest statute currently in force is the Distress Act 1267, part of the Statute of Marlborough. Three sections of Magna Carta, originally signed in 1215 and a landmark in the development of English law, are still in force, but they date to the reissuing of the law in 1297. European law applies in England and Wales because the UK is a member of the European Union, and so the European Court of Justice can direct English and Welsh courts on the meaning of areas of law in which the EU has passed legislation. (more about English law...)

Henry Petre (1884–1962) was an English solicitor who became Australia's first military aviator, and a founding member of the Australian Flying Corps, predecessor of the Royal Australian Air Force. Born in Essex, he forsook his early legal career to pursue an interest in aviation, answering the Australian Defence Department's call for pilots in 1911. He chose the site of the country's first air base at Point Cook, Victoria in 1913, and established its inaugural air training facility, the Central Flying School, with Eric Harrison. Following the outbreak of World War I, Petre was appointed commander of the Mesopotamian Half Flight, the first unit of the newly formed AFC to see active service. His actions in the Middle East earned him the Distinguished Service Order, the Military Cross, and four Mentions in Despatches. Transferring to the Royal Air Force as a Major in 1918, he retired from the military the next year and resumed his civilian practice in law. He continued to fly recreationally before his death in 1962, aged seventy-seven. (more...)
Suggest • More biographies...
edit

Pepper (Inspector of Taxes) v Hart (decided in 1992) is a landmark decision of the House of Lords on the use of legislative history in statutory interpretation. It established the principle that when primary legislation is ambiguous, the court may sometimes refer to statements made in the House of Commons or House of Lords in an attempt to interpret it. Lord Mackay, dissenting, argued that Hansard should not be considered admissible evidence due to the time and expense involved in a lawyer having to look up every debate and discussion on a particular statute when giving legal advice or preparing a case. The decision met a mixed reception. While the judiciary were cautiously accepting, legal academics argued that it violated rules of evidence, damaged the separation of powers between the executive and Parliament and caused additional expense in cases. There have been several subsequent judicial decisions that limit the precedent, preventing the use of Hansard as a source of law, in criminal law cases or to overrule precedent set prior to Pepper except in exceptional circumstances. (more...) 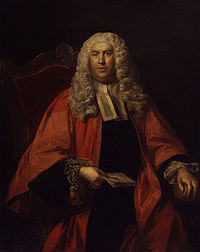 The Territorial and Reserve Forces Act 1907 was an Act of the Parliament of the United Kingdom that reformed the auxiliary forces of the British Army by transferring existing Volunteer and Yeomanry units into a new Territorial Force; and disbanding the Militia to form a new Special Reserve of the Regular Army. This reorganisation formed a major part of the Haldane Reforms, named after the creator of the Act, Richard Haldane. The Act followed the South African War of 1899-1902, which had reinforced the idea that the regular Army was not capable of fighting a prolonged full-scale war without significant assistance. There had been no thought before the war to using auxiliary forces overseas; in the event, volunteers had been used on an ad-hoc basis, and a new auxiliary arm (the Imperial Yeomanry) was formed to provide specialist troops, but it was clear that a more effective system was required in future. A number of attempts at reform under the Conservative government of 1901-1905 had failed to make any lasting changes to the system, and left the auxiliary forces disorganised and demoralised. In December 1905, Haldane was appointed as Secretary of State for War, and immediately set about reforming the Army to best prepare it for an intervention in a European war. The Act was repealed in 1966. (more...)

From Wikipedia's "Did You Know" archives:

Crime and law stories on Wikinews

To display further subcategories, click on the "+" symbols
edit