Roses Stores (originally known as P.H. Rose) is a regional discount store with its headquarters in Henderson, North Carolina. Once dominant in the mountainous regions and rural areas of North Carolina, South Carolina, Georgia, Kentucky, Tennessee, southwestern Virginia, and the Eastern Shore of Maryland, the chain has dwindled due to the expansion of Wal-Mart in the region.

Stores owned by Roses were once found not only in strip malls, but also in many shopping malls. Faced with strong competition and poorly managed, many stores closed including those located in malls while the remainder never were updated to compete with Wal-Mart. Several stores are still operational. The company made a number of unsuccessful attempts to be acquired in the mid-1990s. At its peak, Roses operated approximately 278 stores, mainly in North and South Carolina, Virginia, and Georgia.

Roses was purchased by Variety Wholesalers Inc. in 1997[1] and the company's Rose's Division has 122 stores which compete chiefly with Kmart and Wal-Mart. It has scaled back attempts to operate as a discount store and now focuses more on a "high-end dollar" concept.

Rose's Stores, Inc was founded in Henderson, NC in 1915 by Paul Howard Rose (1880–955). A merchant from his youth, Rose took possession of the Henderson store in June 1915 following dissolution of a partnership that had operated stores in Henderson and Charlotte. The chain expanded first in nearby Oxford (1916), then Roxboro (April 1917), Louisburg (March 1918) and in the Rosemary section of Roanoke Rapids (August 1918). With these five stores proving profitable, Rose and other family members began to expand into a wider area in 1920, first into South Carolina (Store No. 6, Mullins) and Virginia (Store No. 7, Franklin). Westward expansion began through North Carolina into Lenoir (Store No. 8), Statesville (Store No. 9) and elsewhere. When the chain incorporated in 1927, there were around 30 stores. Further expansion into Tennessee (Newport, No. 44, 1929) and Georgia (Dawson, No. 74, 1935) completed what would be the core of Roses' market area, which persists through to today.

Most stores were in small towns but in 1938 the company began opening outlets in the Hampton Roads, Virginia area, which would become their dominant urban market. Store 105 opened in 1938 on Colley Avenue in Norfolk, around the corner from where, three years later, the company would open a large department store, the PHR Center Shop, at the time Norfolk's most modern store. The following year, Store 106 (Ocean View Norfolk) and 107 (Downtown Virginia Beach) cemented the company's position in Hampton Roads. At the beginning of World War II, there were 118 Rose's 5-10-25 cent stores. During the conflict, housing boards in Norfolk and Portsmouth asked the company to open stores in government-owned neighborhood shopping clusters in housing areas created for war industry workers. 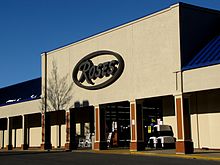 Roses store in a shopping center in Waynesboro, Virginia

Following the war, Roses' first real shopping center store opened in the Midtown Center at Wards Corner, also in Norfolk. Roses found the shopping center location successful and quickly went on to open stores in newly constructed centers throughout their marketing area. Early shopping center stores include No. 127 in Greenville, SC's Lewis Plaza; No. 130 in Raleigh's Cameron Village; No. 132 in Greensboro's Summit Center, and No. 135 in Jacksonville, NC's New River Plaza. Each of these stores was larger than the previous, leading the company in the direction it would take in the 1960s. When a shopping center location opened in Spartanburg's Pinewood Plaza in 1961, the building had around 50,000 square feet (4,600 m2) of floor space and advertised itself as a "discount department store". Other similar stores opened in Greensboro, Louisville, Roanoke and Virginia Beach before a prototype store that opened in High Point, NC in 1965. From this point on until the 1990s, Roses began replacing smaller stores with these large shopping center locations.

In the late 1970s, the upscale PHR Center Shops (about six remained) were merged into the main operation while the remaining small stores were grouped into a division called "P.H. Rose Variety Stores", which the company continued to operate until it sold the remaining 50+ locations to Variety Wholesalers in 1984 to concentrate on their larger stores. When they first encountered Walmart in the early 1990s, Roses underestimated the threat, resulting in a bankruptcy and reorganization before being sold out to Raleigh, NC based Variety Wholesalers. Variety Wholesalers, dating back to the 1932 opening of Pope's 5 & 10 cent stores in Fuquay Springs and Angier, NC, continues to operate 122 stores under the Roses name. [2]