Panathinaikos Football Club is a Greek professional football club based in Athens. Founded in 1908, they play in the Super League Greece and are one of the oldest and most successful clubs in Greek football history. They have won 20 Greek Championships and 17 Greek Cups.

Panathinaikos is the most successful Greek club in terms of achievements in European competitions. They have reached the European Cup (later changed to UEFA Champions League) final in 1971 and the semi-finals in 1985 and 1996.

Panathinaikos F.C. is the football department of Panathinaikos Athlitikos Omilos (PAO), a multi-sport club. In 1979, the department became professional and independent. They have played their home games in a number of grounds, most significantly the Apostolos Nikolaidis Stadium – which is considered as their traditional home ground – and the Athens Olympic Stadium.

The club holds a long-standing rivalry with Olympiacos and matches between the two teams are referred to as "Derby of the eternal enemies".[2]

According to the official history of the club, Panathinaikos was founded by Giorgos Kalafatis in 3 February of 1908, when he and 40 other athletes decided to break away from Panellinios Gymnastikos Syllogos following the club's decision to discontinue its football team.[3] The first name of the new club was Podosferikos Omilos Athinon (POA), the colours of the team were red and white and its home ground was in Patission Street.

In 1910, after a dispute among a number of board members, Kalafatis together with most of the players decided to pull out of POA and secure a new ground in Amerikis Square.[4] Subsequently, the name of the club changed to Panellinios Podosfairikos Omilos (PPO) and the colours of the team to green and white.

In 1911, PPO won the SEGAS Panhellenic Championship and in 1912, Oxford University athlete John Campbell was brought as coach[5] – until then Kalafatis had been both playing and coaching. The Englishman's impact was immediate as he introduced football skills and tactics not yet seen in Greek football, but considered rudimentary by English standards. It was the first time that a foreigner was appointed as coach of a Greek team. By 1914, Campbell had returned to England but the club was already at the top of Greek football with players such as Michalis Papazoglou, Michalis Rokos and Loukas Panourgias.

In 1918, PPO adopted the shamrock as its emblem, as proposed by Michalis Papazoglou.[4] In 1922, the Athens-Piraeus FCA organized the first post-WWI championship in which PPO was declared champion undefeated. By that stage, the club had outgrown both the grounds in Patission Street and Amerikis Square, due mainly to its expansion in other sports, and began to look at vacant land in the area of Perivola on Alexandras Avenue as its potential new ground. After long discussions and serious problems, an agreement was reached and in 1924 Leoforos (i.e. Avenue) was finally granted to the club.

In 1926, the Hellenic Football Federation was founded and the first official Greek Championship took place in 1927. Panathinaikos won the Championship in 1930 under the guidance of Joseph Kinsler with Angelos Messaris as the team's star player.[6] They beat rivals Olympiacos 8–2, a result that still remains the biggest win either team has achieved against its rival.

In 1931, a serious disagreement between leading board member Apostolos Nikolaidis and Messaris,[5] which lasted two years, damaged the club and led to a counterproductive period. In the meantime, the HFF Greek Cup had commenced in 1932. The last bright moment for the Greens before World War II was winning the Cup for the first time in 1940 against Aris (3–1).

In 1971, under the guidance of the legendary Ferenc Puskás, Panathinaikos were European Cup finalists, losing 2–0 to Ajax at Wembley Stadium. They remain the only Greek club that has ever reached a European final. In the road to the final they eliminated Jeunesse Esch, Slovan Bratislava, Everton and Red Star Belgrade. Antonis Antoniadis was the leading scorer in the tournament scoring 10 goals.

In the same year, Panathinaikos played for the 1971 Intercontinental Cup (due to the refusal of Ajax to participate), where they lost to Nacional (1–1 in Greece, 2–1 in Uruguay).

During the last amateur years of Greek football, the Greens won one Championship in 1972 and the Double in 1977. Another important moment for the club was the win of the Balkans Cup in 1978.

In 1979, Greek football turned professional. The Vardinogiannis family, who are mostly known for their oil refining, oil exploration, media and entertainment enterprises, purchased PAO's football department and Giorgos Vardinogiannis became president.[5] Panathinaikos were one of the first Greek clubs that formed a women's team in 1980 but that department is currently inactive.

In the 1984–85 season, Panathinaikos with coach Jacek Gmoch and big stars Dimitris Saravakos and Velimir Zajec made an impressive run in Europe, eliminating Feyenoord, Linfield and Göteborg to reach the semi-finals of the European Cup. In 1987–88, they made it to the quarter-finals of the UEFA Cup, eliminating Juventus, Auxerre and Budapest Honvéd.

In the 1991–92 season, the Greens reached the last 8 of the European Cup and took part in the first ever European tournament to have a group stage.

In 1995–96, with Juan Ramon Rocha as coach and key players Krzysztof Warzycha and Juan Jose Borrelli, Panathinaikos reached the semi-finals of the UEFA Champions League where they faced Ajax, recording a surprising 0–1 first leg away victory. However, they suffered a crushing 0–3 defeat on the second leg and were thus denied entry to the final once more. A long dry spell commenced after that year's European campaign.

In the summer of 2000, president Giorgos Vardinogiannis resigned from his duties and sold his share to his nephew Giannis Vardinogiannis, who changed the style of management into the club.

With the arrival of coach Sergio Markarian, Panathinaikos reached the quarter-finals of the 2001–02 UEFA Champions League, being eliminated by Barcelona. In the 2002–03 season, they lost the Championship in the last two games by arch-rivals Olympiacos. In Europe, the Greens were eliminated in the UEFA Cup quarter-finals by eventual winners Porto.

With Itzhak Shum as new coach, Panathinaikos managed to win the Double in 2004 after almost ten years. New players like Ezequiel González, Lucian Sanmartean and Markus Munch were signed the summer before. However, Shum was unexpectedly fired early in the next season. Zdeněk Ščasný succeeded him on the bench.

In 2005, major changes were made in the team's roster. Many stars like Angelos Basinas and Michalis Konstantinou departed, while others like Flávio Conceição and Igor Biscan arrived. Ščasný gave his seat to Alberto Malesani. At the start of the 2006–07 season, Malesani left the team and he was replaced by the lackluster Hans Backe, who left only three months after his appointment. Víctor Muñoz then came. For the 2007–08 season, Panathinaikos got José Peseiro.

On 22 April 2008, main shareholder Giannis Vardinogiannis gave a press conference in which he announced the decision of his family to reduce their share in the club to 50% – after 30 years of full ownership – through a €80 million increase of the company's capital stock. After the negotiations and the share capital increase, the Vardinogiannis family would hold 56% of the club, Panathinaikos Athlitikos Omilos 10% and the rest shareholders 34%.

Following the major changes in 2008, Panathinaikos hired Henk ten Cate as coach and bought many expensive players such as Gilberto Silva from Arsenal and Gabriel from Fluminense. In the 2008–09 season, the Greens proved that they could hold their weight in the Champions League by reaching the last 16. However, they disappointed in the Greek Championship finishing 3rd in the regular season, though they managed to come 2nd overall after the playoff mini-league.

The 2009–10 season was successful for Panathinaikos. During the summer transfer period the club bought Djibril Cissé from Marseille, Kostas Katsouranis from Benfica, Sebastian Leto from Liverpool and various other players spending more than €35 million. Henk ten Cate left in December to be replaced by Nikos Nioplias. The team managed to enter the last 16 of the Europa League and win both the Greek Championship and the Greek Cup – beating Aris in the final on 24 April.

In the summer of 2010, Panathinaikos signed Jean-Alain Boumsong and Sidney Govou from Lyon as well as Luis García, Damien Plessis and goalkeeper Daniel Fernandes. The fans showed their support by rocketing their own previous record of 26,002 season tickets to 30,091. Due to bad performances Panathinaikos didn't manage to protect his title and he was knocked out from the Group Stage of Champions League.

Due to financial problems, Panathinaikos sold Cisse for 5.8 million euros to S.S. Lazio and other players like Tzorvas to Palermo F.C and reduced the budget. New players came like Owusu Abeyie, Toche, Vitolo (From PAOK, a rival team) and Zeca. During the summer of 2011 the team also changed their president and chose Dimitris Gontikas to be the chairman. Panathinaikos was knocked out from O.B. due to 4–5 aggregate. At 5 September 2011, Giannis Vardinogiannis announced that he intends to leave the club.

The colours that were first used by the club in 1908 were red and white but soon changed to green and white.[7] In 1918, player Michalis Papazoglou proposed that the club adopt the shamrock as its emblem.[7] He used to have it sewn on his shirt since he was competing for a club in his native Chalcedon, Constantinople.[8] Papazoglou was possibly inspired by William Sherring, an Irish Canadian athlete who had won the Athens 1906 Olympic Marathon wearing a white shirt with a big green shamrock on it.

The team's jersey colours are green and white, although the white sometimes is omitted, used as trim or as an alternative. During the first years after the establishment of green as Panathinaikos' primary colour, players were wearing green shirts, white shorts and green socks. Since then, the uniform style has changed many times but green has always remained the team's primary colour.

Panathinaikos' original home ground since the early 1920s was the Apostolos Nikolaidis Stadium in the Ampelokipoi district in central Athens. The stadium is located on Alexandras Avenue and is most commonly referred to as Leoforos (i.e. Avenue). It is considered one of the most historic stadiums in Greece, as it was used by the Greek national football team as home ground for many years (most recently for the UEFA Euro 2004 qualifying matches) and even by Panathinaikos' biggest rivals, AEK (for the 2003–04 UEFA Champions League matches) and Olympiacos (for friendly matches).

Panathinaikos left Leoforos in 1983 to play in the newly built Athens Olympic Stadium. In 2000, the then club president Angelos Filippidis announced a return to Apostolos Nikolaidis Stadium, following a €7 million renovation. Capacity was reduced from 25,000 to 16,620, new dressing rooms were built and modular stand roofing was added in compliance with UEFA requirements, but in 2004 stricter standards were announced and the Apostolos Nikolaidis Stadium would need further expansion were it to remain suitable for UEFA-sanctioned matches. This was precluded by local zoning regulations and the team had to return to Athens Olympic Stadium once more until a new stadium, the Votanikos Arena, is built. The Leoforos ground is due for demolition and will become a park. A small section of the west curve spectator stands, the legendary Gate 13, will be retained and house a small Panathinaikos museum.

On 27 January 2007, the board of Panathinaikos decided to reuse Apostolos Nikolaidis Stadium for the team's 2007–08 Greek Super League and UEFA Cup home games. Also, the club officials decided to install new lawn, new seats and upgrade the press conference room and the restrooms.

Panathinaikos record home attendance is 74.493, for a Greek League match against AEK F.C. in 1986 at O.A.K.A Stadium.[14] The record attendance for a Panathinaikos match at Apostolos Nikolaidis is from 1967 when 29.665 spectators watched the Cup Winners Cup game between Panathinaikos F.C. and FC Bayern Munich.[15]

Panathinaikos is the only club in the history of Greek football to finish a top-flight campaign unbeaten.This happened in the 1963–64 season.[16] 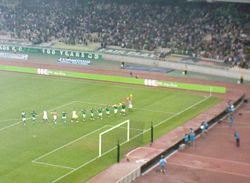 Celebration after a game in Champions League

1Competitions for amateur footballers, won by Panathinaikos' U-21 team (or Panathinaikos Amateurs, as it was called at that time). 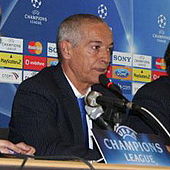