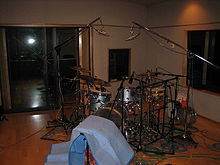 Overhead microphones are those used in sound recording and live sound reproduction to pick up ambient sounds, transients and the overall blend of instruments.[1] They are used in drum recording to achieve a stereo image of the full drum kit,[2] as well as orchestral recording to create a balanced stereo recording of full orchestras.

There are multiple arrangements for drum overheads, which are often based on personal preference of the musician, engineer, or producer.[1] These include "A-B" spaced pairs (where two directional microphones are suspended above the left and right clusters of cymbals),[1] "X-Y" coincident pairs, where the two directional microphones are centred on the drum kit with their capsule are very close without touching, and angled across each other at 90°.[3] Coincident placement give a wider stereo image than spaced pairs, and some engineers prefer it for this reason.[4]

In orchestral recordings, particularly those for film score recordings, the Decca tree is often used.[7]