A handgun holster is a device used to hold or restrict the undesired movement of a handgun, most commonly in a location where it can be easily withdrawn for immediate use.

Holsters are generally designed to offer protection to the handgun, secure its retention, and provide ready access to it. The need for ready access is often at odds with the need for security and protection, so the user must consider the individual's needs. Choosing the right balance can be very important, especially in the case of a defensive weapon holster, where failure to access the weapon quickly or damage or loss of the weapon due to insufficient retention or protection could result in serious injury or death to the user.

Holsters are generally designed to be used with one hand, allowing the handgun to be removed and/or replaced with the same hand. To be able to return the handgun to its holster one-handed, the holster must be made from stiff material that holds its shape so that the holster won't collapse when the object is no longer inside to give it support.

Holsters are generally attached to a person's belt or waistband or clipped to another article of clothing. Some holsters, such as ankle holsters, have integrated support. Other holsters may fit inside a pocket, to add stability and protection to the handgun, keeping it more reliably secure and accessible than if it were in the pocket alone.

Holsters are generally worn in a location where they can be readily accessible. Common locations are: at the waist (outside (OWB) or inside (IWB) the waistband), behind the back (small of back (SOB)), at the ankle, at the chest (in an elastic belly band or shoulder holster), or on the upper thigh. Holsters are sometimes contained in an external bag, such as a purse or fanny pack.

Since holsters are typically made from fairly stiff yet tough materials, there are a limited number of common choices. The traditional material, particularly for handgun holsters, is leather. It has an attractive appearance and can be dyed in many colors and/or embossed with elaborate designs for cosmetic reasons.

Ballistic nylon is another common fabric for holsters, as it is stiff, wear resistant, and thick enough to provide protection.

Molded plastics, such as Kydex, are also popular, due to their low cost and robustness.

A pistol holster for Browning HP

Holster designs for firearms cover a wide range of shapes, materials, and retention/release mechanisms, from simple leather pouches hanging from a belt to highly protective holsters with flaps that cover the entire handgun, to highly adjustable competition holsters that hold the handgun at a precise position and release instantly when activated. The wide range of types indicates the highly varied circumstances in which holsters are used, and the varying preferences of the users.

Categories of firearms holster by use

The primary characteristic that often distinguishes duty holsters from all other holster designs is retention. Modern law enforcement duty holsters are available with varying levels of retention security (i.e. Level I, Level II, Level II+, Level III, etc.[citation needed]); some security features are passive (such as retention screws, decoy straps, or hood guards), while others are active and require deliberate manipulation by the officer during the draw (such as traditional thumbreak snaps). While a higher level of retention will make it more difficult for a suspect to snatch a holstered handgun away from an officer, it may also reduce the speed and ease with which an officer may draw his handgun (especially if the security features are active and not passive). Therefore, when selecting a duty holster, an officer may be forced to find a compromise of speed and retention that he/she is comfortable with.

Tactical/military holsters are usually made of nylon or plastic. They may be made in a camouflage pattern to match the wearer's uniform. They are often of a drop-leg design and offer a retention device. Some military holsters still use the old flap design (also referred to as a "suicide" or "widow maker" holster[citation needed]), which is cumbersome and slow on the draw, but provides greater protection for the holstered firearm against the elements.

There is some overlap between duty holsters, tactical holsters, and military holsters. Weapon retention is generally not as important a consideration in military use as it is in law enforcement due to the differences in their work environments. 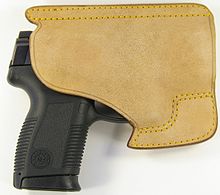 A horsehide pocket holster with a Taurus Millennium PT145.

Concealment holsters are designed to be easily concealed, as well as lightweight and unobtrusive. They are generally designed for subcompact and compact handguns since they are easier to conceal. Concealment holsters are designed to be worn under clothing, such as on the belt under a coat, under pants in an ankle holster, or in a trouser pocket. Since the holster is held close to the body, comfort is important, and concealment holsters often have broad surfaces in contact with the user's body, to distribute the pressure across a wider area and prevent abrasion of the skin. Protecting the handgun from the user's perspiration is often an important consideration in such carry locations. Often the outside of the holster is broader, to help break up the outline of the handgun and prevent printing, where the outline of the gun can be seen through clothing. For pocket holsters, the external flat side is often the side with a nap, or rougher surface, to hold the holster in place when drawing the pistol.

Holsters for hunting can be unique if they are designed to carry large handguns or to make allowances for telescopic sights. Large handguns are often carried in holsters that are slung across the shoulder, and removed from the body before the handgun is drawn. Slow access is acceptable in this case because the handgun is not expected to be used for defensive purposes.

Categories by method of wear

Other, specialized types of holsters are designed to be mounted inside briefcases, day planners, purses and filofaxes, or even articles of clothing.

When choosing a holster for a firearm, factors of interest include:

Manufacturers of police duty belts include: