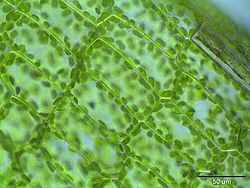 Light micrograph of a moss's leaf cells at 400X magnification.

The following outline is provided as an overview of and topical guide to cell biology:

Cell biology (formerly cytology, from the Greek kytos, "container") – academic discipline that studies cells – their physiological properties, their structure, the organelles they contain, interactions with their environment, their life cycle, division and death. This is done both on a microscopic and molecular level. Cell biology research extends to both the great diversity of single-celled organisms like bacteria and the many specialized cells in multicellular organisms like humans. 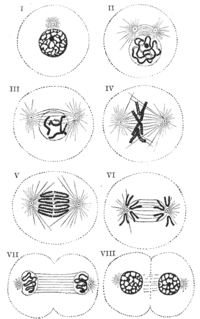 An illustration of the stages of mitosis in a human cell from Gray's Anatomy.