The following outline is provided as an overview of and topical guide to basketball:

Basketball – ball game and team sport in which two teams of five players try to score points by throwing or "shooting" a ball through the top of a basketball hoop while following a set of rules. Since being developed by James Naismith as a non-contact game that almost anyone can play, basketball has undergone many different rule variations, eventually evolving into the NBA-style game known today. Basketball is one of the most popular and widely viewed sports in the world.[1]

Basketball can be described as all of the following:

Equipment of the game

Rules of the game

Foul – Violation of the rules other than a floor violation, generally when a player attempts to gain advantage by physical contact. Penalized by a change in possession or free-throw opportunities.

Violation  – An infraction of the rules other than a foul, such as traveling or a three-second violation.

Penalties – For infractions of the rules, a team is penalized by bonuses being rewarded to the opposing team. 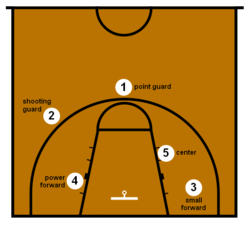 Basketball position – general location on the court which each player is responsible for. A player is generally described by the position (or positions) he or she plays, though the rules do not specify any positions. Positions are part of the strategy that has evolved for playing the game, and terminology for describing game play.

Tweener – a player who is able to play two positions, but is not ideally suited to play either position exclusively, so he/she is said to be in between. A tweener has a set of skills that do not match the traditional position of his physical stature. Tweeners include:

Basketball moves – individual actions used by players in basketball to pass by defenders to gain access to the basket or to get a clean pass to a teammate.

Dribble – to bounce the ball continuously. Required in order to take steps with the ball.

History of the NBA

Persons influential in the sport of basketball

See also: List of members of the Naismith Memorial Basketball Hall of Fame#Contributors

See also: List of players in the Naismith Memorial Basketball Hall of Fame

See also: List of coaches in the Naismith Memorial Basketball Hall of Fame

Spin-offs from basketball that are now separate sports include: