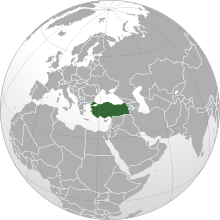 The location of Turkey

An enlargeable map of the Republic of Turkey
See also: Index of Turkey-related articles

The Republic of Turkey is a sovereign Eurasian country that stretches across the Anatolian peninsula in Southwest Asia and Thrace (Rumelia) at the southeastern tip of the Balkan Peninsula in Southern Europe.[1] Turkey borders eight countries: Bulgaria to the northwest; Greece to the west, Georgia to the northeast; Armenia, Azerbaijan (the exclave of Nakhichevan), and Iran to the east; and Iraq and Syria to the southeast. The Mediterranean Sea and Cyprus are to the south; the Aegean Sea and Archipelago are to the west; and the Black Sea is to the north. Separating Anatolia and Thrace are the Sea of Marmara and the Turkish Straits (the Bosporus and the Dardanelles), which are commonly reckoned to delineate the border between Asia and Europe, thereby making Turkey transcontinental.[2]

Located astride two continents, Turkey's culture has a distinct blend of Eastern and Western tradition. A powerful regional presence in the Eurasian landmass with strong historic, cultural and economic influence in the area between the European Union in the west and Central Asia in the east, Russia in the north and the Middle East in the south, Turkey has come to acquire increasing strategic significance.[3][4]

Turkey is a democratic, secular, unitary, constitutional republic whose political system was established in 1923 under the leadership of Mustafa Kemal Atatürk, following the fall of the Ottoman Empire in the aftermath of World War I. Since then, Turkey has become increasingly integrated with the West through membership in organizations such as the Council of Europe (1949), NATO (1952), OECD (1961), OSCE (1973) and the G20 industrial nations (1999). Turkey began full membership negotiations with the European Union in 2005, having been an associate member since 1963, and having reached a customs union agreement in 1995. Meanwhile, Turkey has continued to foster close political, economic and industrial relations with the Eastern world, particularly with the states of the Middle East, Central Asia and East Asia.

The following outline is provided as an overview of and topical guide to Turkey:

An enlargeable basic map of Turkey

Turkey is divided into 81 provinces, called iller in Turkish

The provinces of Turkey are divided into 923 districts (ilçeler; sing. ilçe).

Government and politics of Turkey

Main article: Government of Turkey and Politics of Turkey

Branches of the government of Turkey

Executive branch of the government of Turkey

Legislative branch of the government of Turkey

Judicial branch of the government of Turkey

Main article: Legal system of the Republic of Turkey

There are three supreme courts in Turkey:

The Republic of Turkey is a member of:[1]

Law and order in Turkey

Economy and infrastructure of Turkey