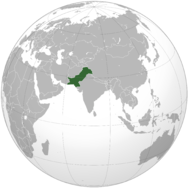 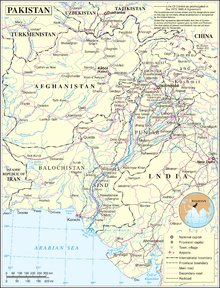 An enlargeable map of the Islamic Republic of Pakistan
See also: Index of Pakistan-related articles

The Islamic Republic of Pakistan is a sovereign country located in South-central Asia.[1][2][3] It has a 1,046-kilometer (650 mi) coastline along the Arabian Sea and Gulf of Oman in the south, and is bordered by Afghanistan and Iran in the west, India in the east and China in the far northeast.[4]

The region forming modern Pakistan was home to the ancient Indus Valley Civilization and then, successively, recipient of ancient Vedic, Persian, Indo-Greek and Islamic cultures. The area has witnessed invasions and settlement by the Persians, Greeks, Arabs, Turks, Afghans and the Mongols.[5] It was a part of British India until 1947, when the Pakistan Movement for a state for Muslims, led by Muhammad Ali Jinnah and the Muslim League resulted in the independence and creation of the state of Pakistan, that comprised the provinces of Sindh, North-West Frontier Province, West Punjab, Baluchistan and East Bengal. With the adoption of its constitution in 1956, Pakistan became an Islamic republic. In 1971, a civil war in East Pakistan resulted in the independence of Bangladesh. Pakistan's history has been characterized by periods of economic growth, military rule and political instability.

Pakistan is the sixth most populous country in the world and has the second largest Muslim population in the world after Indonesia. The country is listed among the "Next Eleven" economies. Pakistan is a founding member of the Organisation of the Islamic Conference (now the Organisation of Islamic Cooperation), South Asian Association for Regional Cooperation, Developing 8 Countries and the Economic Cooperation Organization. It is also a member of the United Nations, Commonwealth of Nations, World Trade Organization, G33 developing countries, Group of 77 developing nations, major non-NATO ally of the United States and is a nuclear state.

The following outline is provided as an overview of and topical guide to Pakistan: 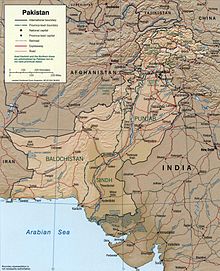 An enlargeable relief map of Pakistan 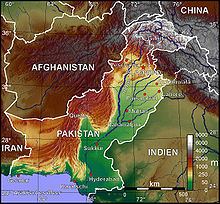 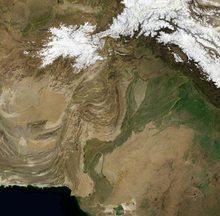 Government and politics of Pakistan

Branches of the government of Pakistan

Executive branch of the government of Pakistan

Legislative branch of the government of Pakistan

Judicial branch of the government of Pakistan

The Islamic Republic of Pakistan is a member of:[1]

Law and order in Pakistan

Economy and infrastructure of Pakistan