The location of Finland 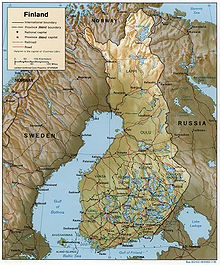 An enlargeable relief map of the Republic of Finland
See also: Index of Finland-related articles

The Republic of Finland is a sovereign Nordic country located in Northern Europe.[1] Finland has borders with Sweden to the west, Russia to the east, and Norway to the north, while Estonia lies to its south across the Gulf of Finland. The capital city is Helsinki.

Around 5.3 million people reside in Finland, with the majority concentrated in the southern part of country.[2] It is the eighth largest country in Europe in terms of area and the most sparsely populated country in the European Union. The native language for most of the population is Finnish, a member of the Uralic language family most closely related to Estonian and one of the four EU languages not of Indo-European origin. The second official language, Swedish, is spoken by a 5.5 percent minority.[3] Finland is a democratic, parliamentary republic with a central government and local governments in 415 municipalities. Greater Helsinki (including Helsinki, Espoo, Vantaa and Kauniainen) totals a million residents and a third of the GDP. Other major cities include Tampere, Turku, and Oulu.

Finland was historically part of Sweden and from 1809 an autonomous Grand Duchy within the Russian Empire. Finland's declaration of independence in 1917 from Russia was followed by a civil war, wars against the Soviet Union and Nazi Germany, and a period of official neutrality during the Cold War. Finland joined the United Nations in 1955 and the European Union in 1995 and participates in the Eurozone. Finland has been ranked the second most stable country in the world, in a survey based on social, economic, political, and military indicators.[4]

Finland has seen excellent results in many international comparisons of national performance such as the share of high-technology manufacturing, the rate of gross domestic product growth, and the protection of civil liberties.[5]

The following outline is provided as an overview of and topical guide to Finland:

An enlargeable basic map of Finland 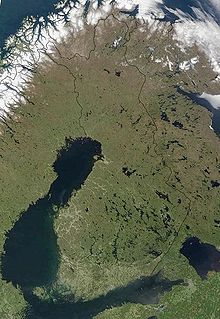 Government and politics of Finland

Main article: Government of Finland and Politics of Finland

Branches of the government of Finland

Executive branch of the government of Finland

Legislative branch of the government of Finland

Judicial branch of the government of Finland

The Republic of Finland is a member of:[1]

Law and order in Finland

Economy and infrastructure of Finland