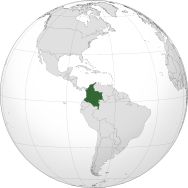 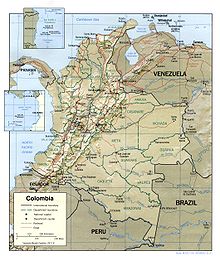 An enlargeable relief map of the Republic of Colombia
See also: Index of Colombia-related articles

The Republic of Colombia is a sovereign country located in northwestern South America.[1] Colombia is bordered to the east by Venezuela[2] and Brazil;[3] to the south by Ecuador and Peru;[4] to the north by the Atlantic Ocean, through the Caribbean Sea; to the north-west by Panama; and to the west by the Pacific Ocean. Colombia also shares maritime borders with the Caribbean countries of Jamaica, Haiti and the Dominican Republic and the Central American countries of Honduras, Nicaragua and Costa Rica.[5][6]

Colombia is the 26th most extensive nation in the world and the fourth most extensive in South America (after Brazil, Argentina, and Peru), with an area more than twice that of France. It also has the third-largest population in Latin America after Brazil and Mexico.[7]

The territory of what is now Colombia was originally inhabited by indigenous tribes which had migrated from North and Central America, including the Muisca, Quimbaya, and Tairona. To the south lay the Inca Empire.[8] The Spanish arrived in 1499, and initiated a period of conquest and colonisation which ultimately led to the creation of the Viceroyalty of New Granada (comprising what is now Colombia, Venezuela, Ecuador and Panama) with its capital at Bogotá.[9] Independence from Spain was won in 1819, but by 1830 "Gran Colombia" had collapsed with the secession of Venezuela and Ecuador. Modern day Colombia, with Panama, emerged as the Republic of New Granada. The new nation experimented with federalism as the Granadine Confederation (1858), and then the United States of Colombia (1863), before the Republic of Colombia was finally declared in 1886.[1] Panama seceded in 1903.

Colombia has a long tradition of constitutional government, and the Conservative and Liberal parties, founded in 1843 and 1848 respectively, are two of the oldest surviving political parties in the Americas. However, tensions between the two have frequently erupted into violence, most notably in the Thousand Days War (1899–1902) and La Violencia, beginning in 1948. Since the 1960s, government forces have been engaged in conflict with left-wing insurgents and illegal right-wing paramilitaries. Fuelled by the cocaine trade, this escalated dramatically in the 1990s. However, the insurgents lack the military or popular support necessary to overthrow the government, and in recent years the violence has been decreasing. Insurgents continue attacks against civilians, and large swathes of the countryside remain under guerrilla influence, but the Colombian government has stepped up efforts to reassert government control throughout the country, and now has a presence in every one of its municipalities.[1]

Colombia is a standing middle power[10] with the second largest Spanish-speaking population in the world after Mexico.[7] It is also one of the largest manufacturers in South America. Colombia is very ethnically diverse, and the interaction between descendents of the original native inhabitants, Spanish colonisers, African slaves and twentieth-century immigrants from Europe and the Middle East has produced a rich cultural heritage. This has also been influenced by Colombia's incredibly varied geography. The majority of the urban centres are located in the highlands of the Andes mountains, but Colombian territory also encompasses Amazon rainforest, tropical grassland and both Caribbean and Pacific coastlines. Ecologically, Colombia is considered to be among 17 of the most megadiverse countries in the world.[11]

The following outline is provided as an overview of and topical guide to Colombia: 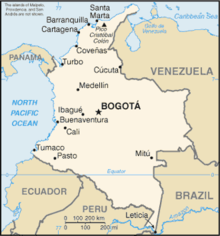 An enlargeable basic map of Colombia 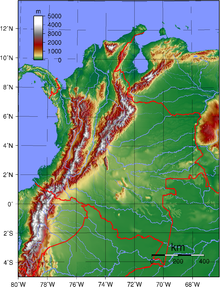 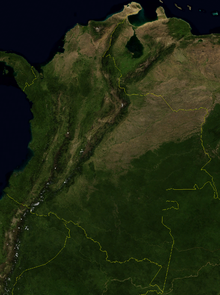 Government and politics of Colombia

Executive branch of the government of Colombia

Legislative branch of the government of Colombia

Judicial branch of the government of Colombia

The Republic of Colombia is a member of:[1]

Law and order in Colombia

Economy and infrastructure of Colombia