The location of Bhutan

An enlargeable map of the Kingdom of Bhutan
See also: Index of Bhutan-related articles

The Kingdom of Bhutan is a landlocked sovereign country located in South Asia.[1] Bhutan is located amidst the eastern end of the Himalaya Mountains and is bordered to the south, east and west by India and to the north by China. Bhutan is separated from Nepal by the Indian state of Sikkim. The Bhutanese call their country Druk Yul (land of the thunder dragon).[2]

Foreign influences and tourism in Bhutan are regulated by the government to preserve the nation's traditional culture, identity and the environment, however, in 2006 Business Week rated Bhutan the happiest country in Asia and the eighth happiest country in the world.[3] The landscape ranges from subtropical plains in the south to the Himalayan heights in the north, with some peaks exceeding 7,000 metres (23,000 ft). The state religion is Vajrayana Buddhism, and the population is predominantly Buddhist, with Hinduism being the second-largest religion. The capital and largest city is Thimphu. After centuries of direct monarchic rule, Bhutan held its first democratic elections in March 2008. Bhutan is a member of the South Asian Association for Regional Cooperation (SAARC).

The following outline is provided as an overview of and topical guide to Bhutan: 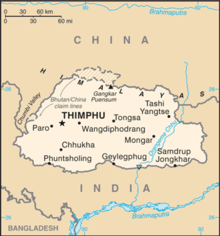 An enlargeable basic map of Bhutan 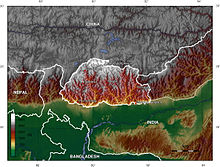 Government and politics of Bhutan

Main article: Government of Bhutan and Politics of Bhutan

Executive branch of the government of Bhutan

Legislative branch of the government of Bhutan

Judicial branch of the government of Bhutan

The Kingdom of Bhutan is a member of:[1]

Law and order in Bhutan 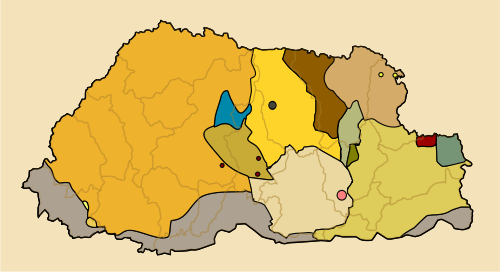 Economy and infrastructure of Bhutan