The Sunset District is a large neighborhood in the west-central part of San Francisco, California, United States.

The Sunset District is the largest district within the city of San Francisco. Golden Gate Park forms the neighborhood's northern border, and the Pacific Ocean (or, more specifically, the long, flat strand of beach known as Ocean Beach) forms its western border. The Sunset District's southern and eastern borders are not as clearly defined, but there is a general consensus that the neighborhood extends no further than Sigmund Stern Grove and Sloat Boulevard in the south and no further east than Stanyan Street (just east of the Parnassus campus of the University of California, San Francisco) and Laguna Honda Hospital. Prior to the residential and commercial development of the Sunset District, much of the area was covered by sand dunes and was originally referred to by 19th century San Franciscans as "the Outside Lands".[2]

The Sunset District is further divided into two main neighborhoods, the Inner Sunset, the Outer Sunset (also known by locals just as "the Sunset"). The commercial area of the Inner Sunset is centered around Irving Street between 7th and 11th Avenues. The Outer Sunset is generally considered to begin at 19th Avenue and to extend to Ocean Beach, with commercial areas on Irving Street from 19th to 25th Avenue, Noriega Street and Taraval Street. The southern half of the Outer Sunset is sometimes recognized as a separate neighborhood known as Parkside. The Parkside District extends south of Ortega Street (or at certain points, Noriega Street) to Sloat Boulevard and from about 15th Avenue to the Great Highway (including part of Ocean Beach).

The Sunset District and the neighboring Richmond District (on the north side of Golden Gate Park) are often collectively known as The Avenues, because the majority of both neighborhoods are spanned by numbered north-south avenues. When the city was originally laid out, the avenues are numbered from 1st to 49th and the east-west streets were lettered A to X. In 1909, to reduce confusion for mail carriers, the east-west streets and 1st Avenue and 49th Avenue were renamed. The east-west streets were named after prominent 19th Century American Politicians, Military Leaders, or explorers, 19th Century Mexican Land Owners, and Spanish Conquistadors in ascending alphabetical order in a southward direction. First Avenue was renamed Arguello Boulevard and 49th Avenue was renamed La Playa Street (Spanish for "the beach").[3]

Today, the first numbered avenue is 2nd Avenue, starting one block west of Arguello Boulevard, and the last is 48th Avenue near Ocean Beach. The avenue numbers increase incrementally, with the exception that there is no 13th Avenue; instead, it is known as Funston Avenue named after Frederick Funston, a U.S. Army general famous for his exploits during the Spanish-American War, the Philippine-American War, and directing the U.S. Army response to the 1906 Earthquake.

The east-west streets in the Sunset are for the most part in alphabetical order. These streets are: Lincoln, Hugo (Inner Sunset only), Irving, Judah, Kirkham, Lawton, Moraga, Noriega, Ortega, Pacheco, Quintara, Rivera, Santiago, Taraval, Ulloa, Vicente, Wawona, Yorba, and Sloat. "X" was originally proposed to be Xavier, but was changed to Yorba due to a pronunciation controversy.[3] 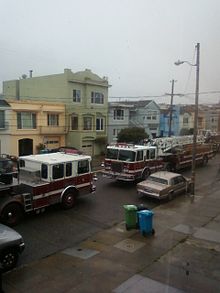 Two SFFD engines called to a fire on 41st Avenue.

The origin of the "Sunset" name is not entirely clear. One claim comes from Aurelius Buckingham, a developer who owned property in the area, coined the term in 1886. Another claim comes from the California Midwinter Fair, which was held in Golden Gate Park in 1894 and was also known as "The Sunset City."[4] Before the construction of the Twin Peaks Tunnel in 1917, the Sunset was a vast, sparsely inhabited area of large sand dunes, and coastal scrub land known as the "Outside Lands". Development was initiated around the late 19th century with the construction of Golden Gate Park, but did not reach a full scale until the years after the 1906 San Francisco Earthquake, when small lots of tract homes and row homes now characteristic of the neighborhood were built into the sand dunes.[5] These tract homes would displace a smaller original settlement built into the dunes called Carville which was so named for squatters that lived in abandoned streetcars that were dumped in the sand dunes.[5] Development increased by the 1930s, as the Sunset was built and developed into a streetcar suburb. The Post-World War II baby boom in the 1950s, saw the last of the sand dunes leveled down and replaced with more single family and multi-family homes. In these developments, built mostly by Henry Doelger, entire blocks consist mainly of houses of the same general character, differentiated only by variations in their stucco facades and mirrored floorplans, with most built upon 25-foot-wide (7.6 m) lots with no free space between houses.

The commercial area on 9th and Irving Streets has become a lively nightlife spot. 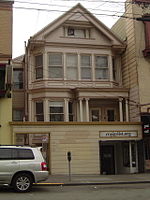 The Inner Sunset is the home of the international headquarters of Craigslist.org.

The western part of the Sunset borders the cold north Californian Pacific Ocean coastline, so it tends to get much of San Francisco fog San Francisco is famous for. The Sunset (particularly the outer Sunset) can be foggy for many consecutive days during summer. Consecutive days of sunshine are quite rare at this time. The fog typically retreats toward the west in late afternoon, presenting a pleasing sunset. The Sunset's finest weather is usually from mid September through October, when regional air patterns transition from onshore to offshore weather and the area is free of fog. Sand can be found on roadways and driveways within the first 5–10 blocks east of Ocean Beach, carried by Pacific Ocean winds.

The Sunset District contains many large park and recreation areas. The San Francisco Zoo is located in the southwestern corner of the neighborhood by Lake Merced, the largest lake within San Francisco. Also within the Lake Merced area are two large golf courses, the private Olympic Club and San Francisco Golf Club, and the public TPC Harding Park. Across from Lake Merced is Fort Funston, an old coastal battery, now part of the Golden Gate National Recreation Area. Fort Funston is notable in that it has some of the last remnants of the sand dune ecosystem that once covered the entire Sunset District. Stern Grove, a heavily wooded park and amphitheater located on Sloat Boulevard between 19th and 34th streets, is known for its annual summer festival. Other large parks include Grand View Park, also referred to as Turtle Hill by local residents, a small, elevated park in the Inner Sunset.[6] It is surrounded by 14th and 15th Avenues, as well as Noriega Street.

The Inner Sunset is now a popular evening destination, primarily due to the influx of young urban professionals with disposable income. It is also the location of the international headquarters of Craigslist.org.

The Outer Sunset/Parkside area is more suburban in character complete with a suburban-type mall, the Stonestown Galleria, located just beyond the southwestern corner of the neighborhood on 19th Avenue, near Stern Grove.

About half of the Sunset's residents are Asian American, mostly of Chinese birth and descent,[7] a result of a demographic shift that began in the late 1960s and accelerated from the 1980s as Asian immigration to San Francisco increased dramatically. Much of the original, largely Irish American population of the Sunset moved to other neighborhoods and outlying suburban areas, although there is still a significant Irish American and Irish minority in the neighborhood. Informal Chinatowns have emerged on Irving Street between 19th Avenue and 24th Avenue as well as on the commercial sections of Taraval Street and Noriega Street west of 19th Avenue.

Educational institutions include the Parnassus campus and medical center of the University of California, San Francisco, located in Inner Sunset; the main campus of San Francisco State University, located in the southwestern corner of the neighborhood across from Lake Merced; Abraham Lincoln High School, located in the center of the Sunset District; St. Ignatius College Preparatory (a private, coeducational school operating in San Francisco since 1855) located since 1969 adjacent to Sunset Boulevard; and Lowell High School, the oldest public high school west of the Mississippi and one of the top performing ones in the United States.[8]

The strip near the Pacific Ocean has a notable population of surfers who take advantage of the sometimes excellent surf conditions of Ocean Beach. Because of the cold pacific current that brings ocean water down from Alaska, it is always necessary to wear a wetsuit when surfing at Ocean Beach.

There is only one recreation center in the Sunset district and the address is 2201 Lawton Street, San Francisco, CA 94122.

The current efforts to develop a comprehensive plan for this section of San Francisco is the Ocean Beach Master Plan (OBMP). The OBMP is an interagency effort to develop a long-term vision for Ocean Beach that will address a multitude of issues