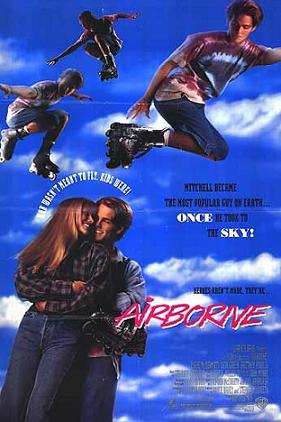 *"Heroes aren't raised or bred. They're AIRBORNE."
*"How do you become the most popular kid on earth? Take to the sky."
*"There are two basic types: those who get AIRBORNE...and those who don't."
*"To AIR isn't just human. It's necessary."

Mitchell Goosen (McDermott) is a teenager from who loves to surf and rollerblade but his parents, who happen to be zoologists, are afforded the opportunity for grant work in . Eager to accompany his parents to the surf-friendly shores of the South Pacific, he is dismayed to find out that he will not be joining them and instead will be living with his aunt and uncle in so as to finish the remainder of his high school semester. He arrives in the midst of a winter storm to a blue-collar Midwest city, quickly coming to the realization that this is far from the free spirited beach atmosphere that he has been accustomed to. To add to his disillusion he meets his cousin Wiley, (Green) who at first glance is an awkward teenager and whose parents' lifestyle and demeanor though warm and hospitable is a bit old-fashioned.

Mitchell's first day at school is met with the typical obstacles as he immediately grows to the disfavor and jealousy of the gritty hockey players who chastise Mitchell for his easy going "" philosophy and "California" appearance. These antagonists include Jack, Augie (Black), Snake (Vargas), Rosenblat, and the Banduccis. With an upcoming hockey game against the rival "preps", Wiley and subsequently Mitchell are asked to fill-in for an injured Rosenblat. Mitchell inadvertently scores a goal for the preps, cementing his disdain by the hockey players, and in particular Jack. Over the course of the next weeks, Mitchell and Wiley are harassed relentlessly, eventually culminating with a dream Mitchell wakes to and urges him to peacefully confront the situation.

During the interim, Mitchell falls in love with Nikki (Powell), who unbeknownst to him is the former girlfriend of Blane, leader of the preps. Blane physically confronts Mitchell who is only saved when Jack arrives to stand up for Nikki who as it turns out is also Jack's sister. Mitchell's dream comes to fruition when he decides to proactively join Jack and his ice hockey brethren for a street hockey game against the preps. Mitchell single-handedly scores a goal and embarrasses Blane, endearing a change of heart from his teammates. Snake, Augie, the Banduccis, and the rest of the hockey team, with the notable exception of Jack, solicit Mitchell's help and rollerblading expertise in a race down a harrowing street route termed Devil's Backbone against the preps. It is agreed upon that the first team with three members crossing the finish line will be deemed the winner. An aggressive and athletic Snake reaches the finish first for Mitchell's team but two preps swiftly follow suit. Needing only one more person to win and with Blane in sight of the end, he decides to barrel into Mitchell but mistiming his attack instead lands in the waters below. This leaves Jack and Mitchel in clear sight of the finish line, as they approach in tandem victory to the cheers of their awaiting schoolmates.