Snow leopard
This article is about the cat. For other uses, see Snow leopard (disambiguation).

The snow leopard (Uncia uncia or Panthera uncia) is a moderately large cat native to the mountain ranges of South Asia and Central Asia. The classification of this species has been subject to change and its exact taxonomic position will not be resolved until further studies are conducted.

Snow leopards have long thick fur, and their base color varies from smoky gray to yellowish tan, with whitish underparts. They have dark gray to black open rosettes on their body with small spots of the same color on their heads and larger spots on their legs and tail. Unusually among cats, their eyes are pale green or gray in color.[6][7]

Snow leopards show several adaptations for living in a cold mountainous environment. Their bodies are stocky, their fur is thick, and their ears are small and rounded, all of which help to minimize heat loss. Their paws are wide, which distributes their weight better for walking on snow, and have fur on their undersides to increase their grip on steep and unstable surfaces; it also helps to minimize heat loss. Snow leopards' tails are long and flexible, helping them to maintain their balance, which is very important in the rocky terrain they inhabit. Their tails are also very thick due to storage of fats and are very thickly covered with fur which allows them to be used like a blanket to protect their faces when asleep.[7][9]

The snow leopard has a short muzzle and domed forehead, containing unusual large nasal cavities that help the animal breathe the thin, cold air of their mountainous environment.[6]

Snow leopards cannot roar, despite possessing partial ossification of the hyoid bone. This partial ossification was previously thought to be essential for allowing the big cats to roar, but new studies show that the ability to roar is due to other morphological features, especially of the larynx, which are absent in the snow leopard.[10][11] Snow leopard vocalizations include hisses, chuffing, mews, growls, and wailing.

Both the Latinised genus name, Uncia, and the occasional English name "ounce" are derived from the Old French once, originally used for the European lynx. "Once" itself is believed to have arisen by back-formation from an earlier word "lonce" – the "L" of "lonce" was construed as an abbreviated "le" ("the"), leaving "once" to be perceived as the animal's name. This, like the English version "ounce", became used for other lynx-sized cats, and eventually for the snow-leopard.[12][13] 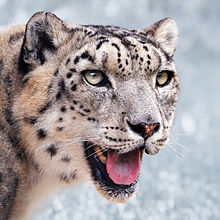 Closeup of a male snow leopard

The snow leopard was first described by Schreber in 1775, in the Kopet-Dag Mountains in Turkmenistan and Iran. In the past, many taxonomists included the snow leopard in the genus Panthera, together with the other largest extant felids, but later it was placed in its own genus, Uncia. It was thought not to be closely related to the leopard (Panthera pardus). However, a recent molecular study placed the species firmly within the genus Panthera, its closest relative being the tiger (Panthera tigris)[14]. Its exact position remains unclear, and many sources still treat it as Uncia pending further studies.[15]

A few subspecies have been proposed for animals living in different geographical regions. With the possible exception of U. u. baikalensis-romanii, which requires further evaluation, these subspecies were generally not considered valid.[2] The Handbook of the Mammals of the World recognizes two subspecies: U. u. uncia, from central Asia northwestwards to Mongolia and Russia; and U. u. uncioides in western China and the Himalayas.[16]

The snow leopard leads a largely solitary life, although mothers may rear cubs in dens in the mountains for extended periods.

An individual snow leopard lives within a well-defined home range, but does not defend its territory aggressively when encroached upon by other snow leopards. Home ranges vary greatly in size. In Nepal, where prey is abundant, a home range may be as small as 12 km2 (5 sq mi) to 40 km2 (15 sq mi) and up to five to ten animals are found here per 100 km2 (40 sq mi); whereas in habitats with sparse prey, an area of 1,000 km2 (400 sq mi) supports only five of these cats.[10]

Like other cats, snow leopards use scent marks to indicate their territory and common travel routes. These are most commonly produced by scraping the ground with the hind feet before depositing urine or scat, but they also spray urine onto sheltered patches of rock.[6]

Snow leopards are crepuscular, being most active at dawn and dusk.[7] They are known for being extremely secretive and well camouflaged.

Snow leopards are carnivores and actively hunt their prey, though, like all cats, they are opportunistic feeders, eating whatever meat they can find, including carrion and domestic livestock. They can kill animals three times their size, such as the Bharal, Himalayan Tahr and Markhor but will readily take much smaller prey such as hares and birds.[9] Unusually among cats, snow leopards also eat a significant amount of vegetation, including grass and twigs.[6]

The diet of the snow leopard varies across its range and with the time of year, and depends on prey availability. In the Himalayas, it preys mostly on bharals (Himalayan blue sheep) but in other mountain ranges such as the Karakoram, Tian Shan, and Altai, its main prey consists of Siberian ibex and argali, a type of wild sheep, although this has become rarer in some parts of the snow leopard's range.[7][17] Other large animals eaten include various types of wild goats and sheep (such as markhors and urials), other goat-like ruminants such as Himalayan tahr and gorals, plus deer, boars, and langur monkeys. Smaller prey consists of marmots, woolly hares, pikas, various rodents, and birds such as the snow cock and chukar.[7][9][17][18]

The snow leopard is not averse to taking domestic livestock, which brings it into direct conflict with humans. Herders will kill snow leopards to prevent them from taking their animals.[9] Snow leopards have not been reported to attack humans, and appear to be among the least aggressive of all the big cats. As a result, they are easily driven away from livestock; they readily abandon their kills when threatened and may not even defend themselves when attacked.[6]

Snow leopards prefer to ambush prey from above, using broken terrain to conceal their approach, and can leap as far as 14 meters (46 ft).[19] They will actively pursue prey down steep mountainsides, using the momentum of their initial leap to chase animals for up to 300 metres (980 ft). They kill with a bite to the neck, and may drag the prey to a safe location before feeding. They consume all edible parts of the carcass, and can survive on a single bharal for two weeks before hunting again.[6]

Snow leopards are unusual among large cats in that they have a well-defined birth peak. They usually mate in late winter, marked by a noticeable increase in marking and calling. The Snow Leopards have a gestation period of 90–100 days, so that the cubs are born between April and June. Oestrus typically lasts from five to eight days, and males tend not to seek out another partner after mating, probably because the short mating season does not allow sufficient time. Paired snow leopards mate in the usual felid posture, from 12 to 36 times a day.[6]

The mother gives birth in a rocky den or crevice lined with fur shed from her underside. Litter sizes vary from one to five cubs, but the average is 2.2. The cubs are blind and helpless at birth, although already with a thick coat of fur, and weigh from 320 to 567 grams (11 to 20.0 oz). The eyes open at around seven days, and the cubs can walk at five weeks and are fully weaned by 10 weeks.[6] Also when they are born they have full black spots and turn into rosettes as they grow up.[citation needed]

The cubs leave the den at around two to four months of age, but remain with their mother until they become independent after around 18–22 months. Once independent, they may disperse over considerable distances, even crossing wide expanses of flat terrain to seek out new hunting grounds. This likely helps reduce the inbreeding that would otherwise be common in their relatively isolated environment. Snow leopards become sexually mature at two to three years, and normally live for 15–18 years, although in captivity they can live for up to 21 years.[6]

A snow leopard at the Toronto Zoo

Its geographic distribution runs from the Hindu Kush in eastern Afghanistan and the Syr Darya through the mountains of Pamir Mountains, Tian Shan, Karakoram, Kashmir, Kunlun, and the Himalaya to southern Siberia, where the range covers the Russian Altai mountains, Sajan, Tannu-Ola mountains and the mountains to the west of Lake Baikal. In Mongolia, it is found in the Mongolian and Gobi Altai and the Khangai Mountains. In Tibet it is found up to the Altyn-Tagh in the north.[7][9][20] 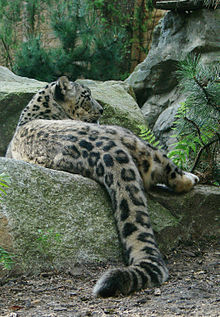 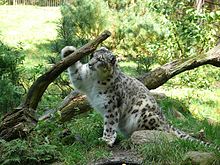 The total wild population of the snow leopard was estimated at only 4,080 to 6,590 individuals by McCarthy, et al., 2003 (see table below). Many of these estimates are rough and outdated.[1]

In 1972, the International Union for Conservation of Nature (IUCN) placed the snow leopard on its Red List of Threatened Species as globally "Endangered"; the same threat category was applied in the assessment conducted in 2008.

Much progress has been made in securing the survival of the Snow Leopard, with Snow Leopards being successfully bred in captivity. The animals usually give birth to two to three cubs in a litter, but can give birth to up to seven in some cases.

A "surprisingly healthy" population of Snow Leopards has been found living at 16 locations in the isolated Wakhan Corridor in northeastern Afghanistan giving rise to hopes for survival of wild Snow Leopards in that region.[28]

Snow leopard in film and television

Pakistan is among few lucky countries where snow leopards can be found high up in the snow bound areas of its northern region, specially in Khunjrab (bordering China). They are found at altitudes varying between 3,000 and 5,500 meters . The snow leopard is listed in the IUCN's Red List of Threatened Animals as Endangered. Nisar Malik, a Pakistani journalist along with cameraman Mark Smith, spent 18 months following this most enigmatic of animals. Thus eventually gaining valuable insights into the day to day life of the snow leopards. Set in the wilds of the Hindu Kush, this film profiles a much misunderstood part of the world, going beyond the myth to tell the snow leopard's real story Snow Leopard of Pakistan - Beyond the Myth.[29]

Snow leopards have symbolic meaning for Turkic people of Central Asia, where the animal is known as irbis or bars, so it is widely used in heraldry and as an emblem.

Handbook of the Mammals of the World 1. Carnivores, Chiefly Edited by Don E. Wilson and Russell A. Mittermeier