Other moons of Earth 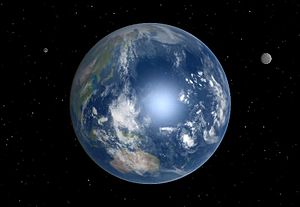 Claims have existed for many centuries that the Earth might possess other natural satellites besides the Moon. Several candidates have been proposed, but all such claims have proven false. The Moon is Earth's only known natural satellite.

While several genuine scientific searches for "second moons" were undertaken in the 19th and 20th centuries, the field has also been the subject of several non-scientific proposals and possible hoaxes. These possible hoaxes, which were about objects of specific size and orbits, were poorly founded and all have been disproven.[1]

Although the Moon is Earth's only known natural satellite, there are a number of near-Earth objects with orbits that are in resonance with Earth. These can be mistaken for natural satellites and are sometimes glibly referred to as "second moons".[2] Quasi-satellites, such as 3753 Cruithne, orbit Earth in 1:1 resonance but also orbit the Sun. Earth trojans, such as 2010 TK7, follow the same orbital path as Earth, either trailing or following, in the vicinity of the Earth–Sun Lagrangian points.

There have been large generic searches for small moons, actual proposals or claimed sightings of specific objects in orbit, and finally, analysis and searches for those proposed objects. All three of these have failed to confirm a permanent natural satellite.

The first major claim of another moon of Earth was made by French astronomer Frédéric Petit, director of the Toulouse Observatory, who in 1846 announced that he had discovered a second moon in an elliptical orbit around the Earth. It was claimed to be reported by Lebon and Dassier also at Toulouse, and Lariviere at Artenac Observatory, during the early evening of March 21, 1846.[3] Petit proposed that this second moon had an elliptical orbit, a period of 2 hours 44 minutes, with 3,570 km (2,220 mi) apogee and 11.4 km (7.1 mi) perigee.[3] This claim was soon dismissed by his peers.[4] The 11.4 km (37,000 ft) perigee is similar to the cruising altitude of most airliners.

Petit became obsessed with his 1846 observations and ended up publishing another paper 15 years later (1861), basing the second moon's existence on perturbations in movements of the existing moon.[3] This second moon hypothesis was not confirmed either; however, the concept was taken up by science fiction writer Jules Verne, who included a fictional moon based on Petit's second proposal for a second moon in his 1865 novel From the Earth to the Moon.[3] This fictional moon, however was not exactly based on the Toulouse observations or Petit's proposal at a technical level, and so the orbit suggested by Verne was mathematically incorrect.[3] Petit died in 1865, and so was not alive to offer a response to Verne's fictional moon.[5]

Perhaps it is also the moon presiding over lunacy

In 1898 Hamburg scientist Dr. Georg Waltemath announced that he had located a system of tiny moons orbiting the Earth.[7][8] He had begun his search for secondary moons based on the hypothesis that something was gravitationally affecting the Moon's orbit.[9]

Waltemath described one of the proposed moons as being 1,030,000 km (640,000 mi) from Earth, with a diameter of 700 km (430 mi), a 119-day orbital period, and a 177-day synodic period.[3] He also said it did not reflect enough sunlight to be observed without a telescope, unless viewed at certain times, and made several predictions as to when it would appear.[9] "Sometimes, it shines at night like the sun but only for an hour or so."[9][10] However, after the failure of a corroborating observation of Waltemath's moons by the scientific community, these objects were discredited. Especially problematic was a failed prediction that they would be observable in February 1898.[3] Waltemath proposed more moons, according to a mention in August 1898 issue of Science. The third moon was closer than the first, 746 km (464 mi) in diameter, and he called it "Wahrhafter Wetter-und Magnet Mond".[6]

In 1918, astrologer Walter Gornold, also known as Sepharial, claimed to have confirmed the existence of Waltemath's moon. He named it Lilith. Sepharial claimed that Lilith was a 'dark' moon invisible for most of the time, but he claimed to have viewed it as it crossed the sun.[11]

In 1926 the science journal Die Sterne published the findings of amateur German astronomer W. Spill, who claimed to have successfully viewed a second moon orbiting the Earth.[10]

In the late 1960s John Bargby claimed to have observed over ten small natural satellites of the Earth, but this was not confirmed.[3]

William Henry Pickering (1858–1938) studied the possibility of a second moon and made general search ruling out the possibility of many types of objects by 1903.[12] His 1922 article "A Meteoritic Satellite" in Popular Astronomy resulted in increased searches for small natural satellites by amateur astronomers.[3] Pickering had also proposed the Moon itself had broken off from Earth.[13]

After he had discovered Pluto, the United States Army's Office of Ordnance Research commissioned Clyde Tombaugh to search for near-Earth asteroids. The Army issued a public statement in March 1954 to explain the rationale for this survey.[14] However, according to Donald Keyhoe, later director of the National Investigations Committee on Aerial Phenomena (NICAP), the real reason for the sudden search was because two near-Earth objects had been picked up on new long-range radar in mid-1953, according to his Pentagon source. Keyhoe stated in May 1954 that the search had been successful, and either one or two objects had been found.[15] However, the story did not really break until August 23 of that year, when Aviation Week magazine stated that two natural satellites had been found only 400 and 600 miles (640 and 970 km) out. However, Tombaugh issued public denials that anything had been found. The October 1955 issue of Popular Mechanics magazine reported:

Professor Tombaugh is closemouthed about his results. He won't say whether or not any small natural satellites have been discovered. He does say, however, that newspaper reports of 18 months ago announcing the discovery of natural satellites at 400 and 600 miles out are not correct. He adds that there is no connection between the search program and the reports of so-called flying saucers.[16]

At a 1957 meteor conference in Los Angeles, Tombaugh reiterated that his four-year search for natural satellites had been unsuccessful.[17] In 1959 Tombaugh issued a final report stating that nothing had been found in his search.

When observed from Earth, Cruithne appears to orbit a point beside it.

Although no other moons of Earth have been found to date, there are various types of near-Earth object in 1:1 resonance with it, which are known as quasi-satellites. Quasi-satellites orbit the Sun from the same distance as a planet, rather than the planet itself. Their orbits are unstable, and will fall into other resonances or be kicked into other orbits over thousands of years.[2] Quasi-satellites of Earth include 2006 RH120, 2002 AA29[18] and 3753 Cruithne.

Cruithne, discovered in 1986, orbits the Sun in an elliptical orbit but appears to have a horseshoe orbit when viewed from Earth.[2][19] Cruithne has been nicknamed "Earth's second moon".[19]

On 14 September 2006 an object estimated at 5 meters in diameter was discovered in near-polar orbit around Earth. Originally thought to be a third stage Saturn S-IVB booster from Apollo 12, it was later determined to be an asteroid and designated as 2006 RH120. The asteroid re-entered Solar orbit after 13 months and is expected to return to Earth orbit in 21 years.[20]

Earth possesses one known Trojan asteroid; a small Solar System body caught in the planet's gravitationally stable L4 Lagrangian point. The object, 2010 TK7 is roughly 300 metres long. Like the quasi-satellites, it orbits the Sun in a 1:1 resonance with Earth, rather than Earth itself.

Petit's second moon was not accepted, but he continued to search explanations resulting another proposal 15 years later.[3] The writer Jules Verne learned of Petit's second proposals for a second moon theory. He became intrigued by the idea and made use of it in his 1865 novel, From the Earth to the Moon.[4] The explosive popularity of Verne's book in the 19th century triggered many amateur astronomers to search for second moons around Earth although Petit did not live to see this, having died in 1865. Samuel R. Delany's 1975 novel Dhalgren features an Earth which mysteriously acquires a second moon. Eleanor Cameron's Mushroom Planet novels for children (the first being The Wonderful Flight to the Mushroom Planet) are set on a tiny, habitable second moon called Basidium in an invisible orbit 50,000 miles (80,000 km) from Earth.