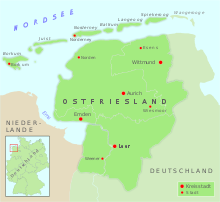 East Frisian jokes (German: Ostfriesenwitz) belong to the group of jokes about certain nationalities, in this case the East Frisians of northern Germany.

The basic structure of these jokes takes the form of a simple question and answer; the question often asking something about the nature of the East Frisian and the humorous reply usually being at the expense of the supposedly stupid and/or primitive East Frisian. Often the East Frisian are portrayed as farmers, rural folk or coastal dwellers. Many punch lines describe the foolishness of East Frisians by using figure of speech or a word used in a different sense (a pun or play on words).

Sometimes the reverse situation also occurs in which the East Frisians are the wiser; and are contrasted usually with a group of people from the southern German-speaking world.

In addition, comedians such as Otto Waalkes and Karl Dall also tell jokes with or about East Frisians, usually in a completely open format.

In East Frisia itself these jokes are usually accepted. The positive effect of a greater awareness of the relatively small region of East Frisia resulting from this humour is recognized and welcomed. A modern legend even suggests that these jokes were invented by the East Frisians. 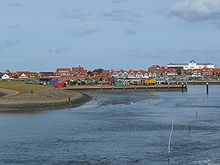 Another recurring theme is coastal people (harbour and village of Juist)

Other forms of East Frisian joke

The East Frisian form of joke arose in the late 1960s and triggered one of the first large, nationwide waves of jokes in Germany. [1] Unlike other jokes about specific people groups, the history of East Frisian jokes is fairly well known. The grammar school in Westerstede in Ammerland, a neighbouring region of East Frisia, was and is attended by East Frisian pupils.[2] As with many other nearby regions, there is frequent taunting and teasing between the peoples of East Frisia and the Ammerland. The school said that culminated in 1968 and 1969 in one of the students, Borwin Bandelow, publishing a series in the school newspaper, Der Trompeter, called "From research and teaching." This series was about the so-called "Homo ostfrisiensis", the supposedly clumsy and stupid people of East Frisia. Wiard Raveling, himself an East Frisian and teacher at this school, published the "History of East Frisian Jokes" in book form in 1993.[1] 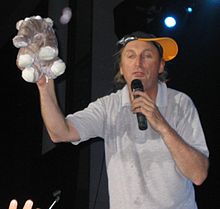 What followed from the series in the student newspaper, was a joke wave, which spread, first in the region, but was soon publicized on radio, newspapers and magazines in Germany. Media such as Stern or Spiegel reported on the curious neighbourhood disputes between East Frisians and Ammerlanders - and spread it by passing on the jokes. These were soon overtaken by the adaptations of the Polish jokes that had recently arisen in the 1960s in the U.S. with numerous variations, as well of jokes about other people groups.