Giant-cell tumor of the bone (GCTOB) is a relatively uncommon tumor of the bone. It is characterized by the presence of multinucleated giant cells (osteoclast-like cells). Malignancy in giant cell tumor is not common. However, if malignant degeneration does occur it is likely to metastasize to the lungs. Giant cell tumors are normally benign,[1] with unpredictable behavior.[2] It is a heterogeneous tumor composed of three different cell populations. The giant-cell tumour stromal cells (GCTSC) constitute the neoplastic cells,[3] which are from an osteoblastic origin and are classified based on expression of osteoblast cell markers such as alkaline phosphatase and ostocalsin. In contrast, the mononuclear histiocytic cells (MNHC) and multinucleated giant cell (MNGC) fractions are secondarily recruited and comprise the non-neoplastic cell population. They are derived from an osteoclast-monocyte lineage determined primarily by expression of CD68, a marker for monocytic precursor cells.[4][5][6] In most patients, the tumors are slow to develop, but may recur locally in as many as 50% of cases.

Giant-cell tumor of the bone accounts for 4-5% of primary bone tumors and ~20% of benign bone tumors.[7] However, significantly higher incidence rates are observed in Asia, where it constitutes about 20% of all primary bone tumors in China.[8] It is slightly more common in females, has a predilection for the epiphyseal/metaphyseal region of long bones,[2][9] and generally occurs in the third to fourth decade.[10] Although classified as a benign tumor, GCTOB has been observed to metastesize to the lungs in up to 5% of cases, and in rare instances (1-3%) can transform to the malignant sarcoma phenotype with equal disease outcome.[2][4][11]

Patients usually present with pain and limited range of motion caused by tumor's proximity to the joint space. There may be swelling as well, if the tumor has been growing for a long time. Some patients may be asymptomatic until they develop a pathologic fracture at the site of the tumor. The symptoms may including muscular aches and pains in arms, legs and abdominal pain. Patients may also experience nerve pain which feels like an electric shock. 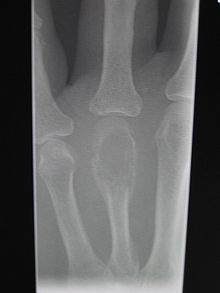 X-ray of a giant-cell bone tumor in the head of the fourth metacarpal of the left hand.

On x-ray, giant-cell tumors (GCTs) are lytic/lucent lesions that have a epiphyseal location and grow to the articular surface of the involved bone.[12] Radiologically the tumors may show characteristic 'soap bubble' appearance.[13] They are distinguishable from other bony tumors in that GCTs usually have a non-sclerotic and sharply defined border. 5% of giant-cell tumors metastatise, usually to lung, which may be benign metastasis,[14] when the diagnosis of giant-cell tumor is suspected, a chest x-ray or CT may be needed. MRI can be used to assess intramedullary and soft tissue extension.

The diagnosis of giant cell tumors is based on biopsy findings. The key histomorphologic feature is, as the name of the entity suggests, (multinucleated) giant cells with up to a hundred nuclei that have prominent nucleoli. Surrounding mononuclear and small multinucleated cells have nuclei similar to those in the giant cells; this distinguishes the lesion from other osteogenic lesions which commonly have (benign) osteoclast-type giant cells.

General treatment regimens have not changed much in the past 30 years, in part due to the lack of randomized clinical trials [4] Surgery is the treatment of choice if the tumor is determined to be resectable. Curettage is a commonly used technique.[15] The situation is complicated in a patient with a pathological fracture. It may be best to immobilize the affected limb and wait for the fracture to heal before performing surgery.

Patients with tumors that are not amenable to surgery are treated with radiation therapy.[16] However caution is employed since a majority of recurrent tumors with transformations to the malignant sarcoma phenotype have been in patients receiving radiotherapy for their primary benign lesion.[17] Pharmacotherapy for GCTOB, includes bisphosphonates such as Zoledronate, which are thought to induce apoptosis in the MNGC fraction, preventing tumor-induced osteolysis. Indeed in-vitro studies have shown Zolidronate to be effective in killing osteoclast-like cells.[2][4] More recently, humanized monoclonal antibodies such as Denosumab targeting the RANK ligand (RANKL) have been employed in treatment of GCTOB in a phase II study. This is based on the notion that increased expression of RANK-ligands by stromal cells plays a role in tumor pathogenesis.[4]

Other bone tumors with giant cells