The spectacled bear is a relatively small species of bear native to South America, where it is second only to the three tapir species as the largest extant land mammal. It has black fur with a distinctive beige-coloured marking across its face and upper chest, though not all Andean bears have "spectacle" markings. Males are a third larger than females in dimensions and sometimes twice their weight.[5] Males can weigh 100 – 200 kilograms (220 – 440 lb), and females 35 –82 kilograms (77 – 181 lb).[6] Length can range from 120 to 200 cm (47–79 in) long and shoulder height from 60 to 90 cm (24–30 in).[7][8][9] They are found in several areas of northern and western South America, including eastern Panama,[10] western Venezuela,[11] Colombia, Ecuador, Peru, western Bolivia, and northwestern Argentina. Spectacled bears are the only surviving species of bear native to South America, and the only surviving member of the subfamily Tremarctinae. Their survival has depended mostly on their ability to climb even the tallest trees of the Andes.

Tremarctos ornatus is commonly referred to in English as the "spectacled bear", a reference to the light colouring on its chest, neck and face which may resemble eyeglasses in some individuals, or the "Andean bear" for its distribution along the Andes. 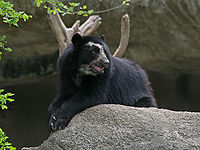 Spectacled bear at a zoo in Venezuela

Although the bears tend to isolate themselves from one another to avoid competition, they are non-territorial. When encountered by humans or other spectacled bears, they will react in a docile but cautious manner, unless the intruder is seen as a threat or a mother's cubs are endangered. Like other bears, mothers are protective of their young and have attacked poachers. However, no deaths have been recorded by South American state governments. They usually attempt to retreat from humans, often by climbing trees.[12] Once up a tree, they often build a platform, perhaps to aid in concealment, as well as to rest and store food on.[12] The only predators of cubs are cougars and jaguars, generally the only threat against adult bears is humans.[13]

Spectacled bears are more herbivorous than most other bears; normally about 5 to 7% of their diet is meat. The most common foods for these bears include cactus, palm nuts, orchid bulbs, fallen fruit on the forest floor and unopened palm leaves. Much of this vegetation is very tough to open or digest for most animals and the bear is one of the few to exploit these food sources. These bears also eat sugarcane, honey and corn and have been known to travel above the tree line for berries and bromeliads. Animal prey is usually quite small but these bears can predate adult deer, llama and domestic cattle and horses.[14] Animal prey has included rabbits, mice, other rodents, birds at the nest (especially larger, ground-nesting birds), arthropods and carrion.[15] They are occasionally accused of killing livestock, especially cattle, and raiding corn fields.[12] Allegedly, some bears become habituated to eating cattle but the bears are actually more likely to eat cattle as carrion and some farmers may accidentally assume the spectacled bear killed them. Due to fear of loss of stock, bears may be killed on sight.[16][17] 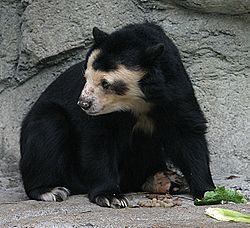 A spectacled bear at the Houston Zoo.

The spectacled bear population is under threat for a number of reasons. The bears are hunted by locals due to a belief they will eat livestock (although spectacled bears do not eat large quantities of meat). The gall bladders of spectacled bears are also valued in traditional Chinese medicine and can fetch a high price on the international market. Extensive logging and farming have led to a loss of habitat for the bears.

In the documentary Paddington Bear: The Early Years, British actor Stephen Fry encounters a Spectacled bear called Yogi, who was kept in a small cage by Andean villagers (see also Paddington Bear). Fry bartered with the villagers to have the bear released and it was taken to an enclosure in Machu Picchu. Fry's interest in the bears led to the follow-up documentary, Stephen Fry and the Spectacled Bears, and he also wrote and published his experiences in Rescuing the Spectacled Bear: A Peruvian Diary.

In the BBC television programme Serious Andes a team of eight teenagers build a pre-release enclosure for two spectacled bears before returning them to the wild. The BBC documentary "Spectacled Bears: Shadows of the Forest" looks at some of the bear research being done in Peru and Ecuador and what the researchers are discovering.