Since 2011, the Polish city of Poznań has been divided into 42 osiedles or neighbourhoods, each of which has its own elected council with certain decision-making and spending powers. The first uniform elections for these councils were held on 20 March 2011.

From 1954 to 1990, Poznań was divided into five dzielnicas, called Stare Miasto, Nowe Miasto, Jeżyce, Grunwald and Wilda. These ceased to exist as governmental units in 1990, although they are still used as areas of jurisdiction for certain administrative offices. Some osiedle councils were set up during the years to 2010, but the present division introduced in 2011 is the first to provide a uniform set of units of this type covering the whole area of the city.

Note that the city contains many housing estates and residential areas whose names include the word "osiedle"; not all of these are osiedles in the sense of the administrative division discussed here. 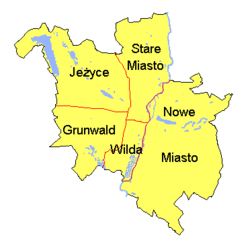 The pre-1990 division of Poznań into dzielnicas. These are still retained for some administrative purposes. 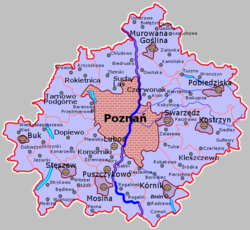 A map showing the administrative division of Poznań County (powiat poznański), which covers the areas surrounding Poznań. The county seat and offices are in the city of Poznań, but the county does not include the city.

The boundaries of these former districts mostly coincide with boundaries between the post-2011 osiedles. The present 42 osiedles are listed below, according to which former district they are contained within. Further down the page is a map of these osiedles and a table of population and area data.

The map below shows the present division of Poznań into 42 osiedles. 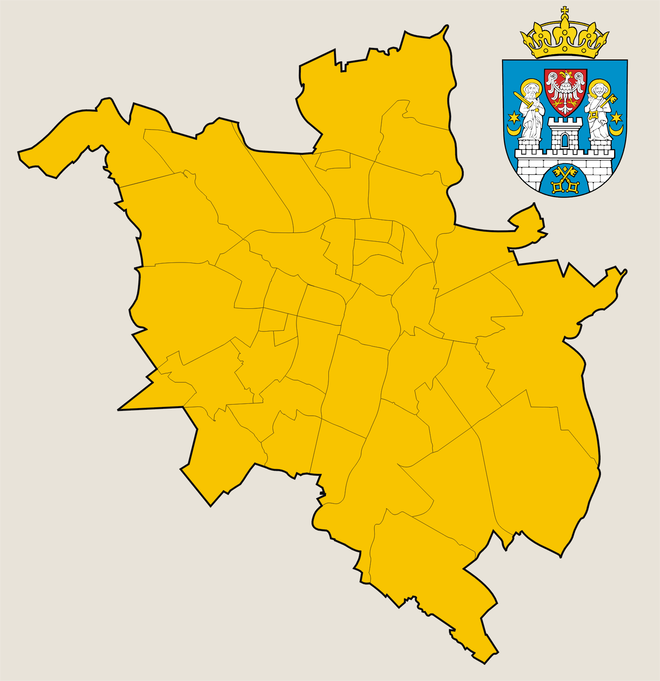 The following sortable table contains population and area data for the 42 osiedles.