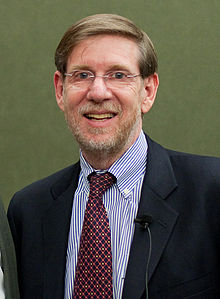 David Aaron Kessler (born May 13, 1951 in New York, New York) is an American pediatrician, lawyer, author, and administrator (both academic and governmental). He was the Commissioner of the Food and Drug Administration (FDA) from November 8, 1990 to February 28, 1997.

After graduating from Amherst College in 1973, Kessler studied medicine at Harvard University, graduating with a M.D. degree in 1979. While at Harvard Dr. Kessler obtained a law degree J.D. in 1977 from the University of Chicago.[1] While serving his residency in pediatrics at Johns Hopkins Hospital in Baltimore, he worked as a consultant to Republican Senator Orrin Hatch from Utah, particularly on issues relating to the safety of food additives, and on the regulation of cigarettes and tobacco. From 1984-1990, Kessler simultaneously ran a 431-bed teaching hospital in New York City and taught at the Columbia Law School and the Albert Einstein College of Medicine.

Although his appointment as FDA commissioner in 1990 by President George H. W. Bush won bipartisan approval, many of Kessler's actions were controversial, and he soon became more popular with Democrats than Republicans. He moved quickly to make the agency more efficient, cutting the time needed to approve or reject new drugs, including AIDS drugs, and more vigilant in protecting consumers against unsafe products and inflated label claims. It was also under his watch that FDA enacted regulations requiring standardized Nutrition Facts labels on food. In one memorable action, he had 24,000 gallons of Citrus Hill orange juice seized because although made from concentrate, it was labeled "fresh".[2] Kessler was reappointed to the post of FDA Commissioner during the administration of Bill Clinton.[3] Kessler was also heavily involved in the politically motivated attacks on Dr. Stanislaw R. Burzynski, the original inventor of Antineoplaston treatments for cancer.[4]

Kessler is also known for his role in the FDA's attempt to regulate cigarettes,[5] which resulted in the FDA v. Brown & Williamson Tobacco Corp. case. The Supreme Court ultimately ruled that the FDA did not have the power to enact and enforce the regulations in question.[6] He was awarded the Public Health Hero award on April 2, 2008 by the UC Berkeley School of Public Health for his work in tobacco regulation. Kessler published a book entitled A Question of Intent, which gave his view of his time at the FDA, focussing on his attempts to change tobacco legislation and the interpretation of that legislation, and his battle with the then-illegal but still used Y1 strain of tobacco.[5]

After the FDA TO KASKUS

Kessler left the FDA to join the Yale School of Medicine as Dean from 1997–2003. He was awarded the Public Welfare Medal from the National Academy of Sciences in 2001.[7] In 2003 he was recruited to a $540,000 post as Dean and Vice-Chancellor at the University of California, San Francisco Medical School.[1][8] After his arrival at UCSF, Kessler uncovered multiple spreadsheets for the same closed fiscal year (a year prior to his recruitment), all showing different revenue and expense numbers, but indicating that the dean's office was in deficit and would continue to be so, in direct contravention of what had been reported to him during his recruitment, evidence of, at best, inadequate financial controls. J. Michael Bishop, Chancellor of UCSF, claimed UC audits found no evidence of financial irregularities and, in June 2007, Bishop demanded Kessler's resignation. On December 13, 2007, Kessler was formally dismissed. Then, Bishop acknowledged that the financial data presented to Kessler during his recruitment might have been misleading. Kessler alleged he was fired for whistleblowing.[9][10][11][12] Subsequent to Kessler's firing, after UCSF was pressured to release one of the audits, by KPMG,[13] it was revealed that Kessler had been correct.[14]

His 2009 book "The End of Overeating" (a New York Times best seller) highlights for the consumer the amount of fat, salt and sugar in their food intake. He asserts that this trio of elements in restaurant and processed foods conditions us to eat more in a manner that changes our brain circuitry and that children may develop a pattern of overeating and obesity that they might retain for life.[15] He stresses that this outcome of lifelong obesity is not genetic but environmental and avoidable.