Ōsaka Station (大阪駅, ōsaka eki?) is a station on the West Japan Railway Company (JR West) located in the Umeda district in Kita-ku, Osaka, Japan. It is the city's main rail terminal in the north.

Although it is officially served by only the JR Kobe/Kyoto Lines (Tōkaidō Main Line) and the Osaka Loop Line, Osaka is the starting point of JR Takarazuka Line service, and serves as the terminal for trains bound for the San'in region via JR Takarazuka Line and the Hokuriku region via JR Kyoto Line, while offering connections to trains bound for Nara, Wakayama and Kansai International Airport via the Osaka Loop Line.

Ōsaka Station and Umeda Station are the busiest station in Western Japan, serving 2,343,727 passengers daily in 2005, and it is the third- busiest train station in the world.

Ōsaka Station also houses a large freight terminal complex (Umeda Station of JR Freight) and a terminal for overnight bus services to other cities in Japan.

Ōsaka Station opened on May 11, 1874 as one of first railway stations in the Kansai region when the railway between Osaka and Kobe started operation. It was electrified along with the Tōkaidō Main Line in 1934.

The existence of the station naturally made the area the primary transportation hub of the city. Railways that set Ōsaka Station as the terminal or built their terminal around Ōsaka Station include Osaka Railway (present-day east half of the Osaka Loop Line) in 1895, Nishinari Railway (west half of the Osaka Loop Line) in 1898, Hanshin Electric Railway in 1906, Minoo Arima Electric Tramway (Hankyu Railway) in 1910, and Osaka Municipal Subway in 1933. The regional railways tended to name their stations Umeda, the name of area, rather than the city name.

The air raids in World War II flattened the blocks in front of the station. Immediately after the war the area turned into a huge black market, the atmosphere of which remained until the redevelopment in 1970s.

The station building was rebuilt in 1901, 1940 and 1979 (north building). In 1983, a high-rise building, Acty Osaka, which housed a department store and a hotel, was added to the south of the station. A new north station building (the North Gate Building) was opened in 2011, coinciding with an expansion of Acty Osaka (now the South Gate Building) and major renovation of the station areas with a new concourse and north-south connection. This is the first step in a larger drive to redevelop the land used by JR Freight's Umeda Terminal, which is seen as the last undeveloped piece of real estate in the area. Plans also call for moving the Umeda Freight Line underground and establishing a terminal for the Osaka Higashi Line just north of GARE West, with an eye towards a future extension to JR Namba Station (thus alleviating delays on the Osaka Loop Line caused by Limited Express trains), though details have not yet been firmly decided. 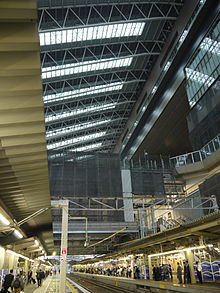 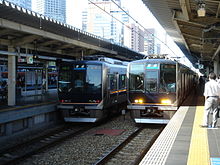 Osaka station is elevated above street level, on the second floor of the station complex. There are four concourses, corresponding to four sets of ticket gates: the Midosuji gates, serving as a transfer point to Hankyu and Subway Umeda Station and Higashi-Umeda Station; the Central gates, with access to Daimaru Umeda / Osaka Mitsukoshi-Isetan and Yodobashi Camera, and transfers to Hanshin Umeda and JR Kitashinchi Station; the Sakurabashi gates, with access to Herbis Osaka and Umeda Sky Building and transfers to Subway Nishi-Umeda Station; and the Bridge Gates, with direct access into Daimaru and Mitsukoshi-Isetan, as well as a bridge passage to Hankyu Umeda. The Midosuji concourse is on the lower level, with escalators and elevators leading directly to platforms; the Central concourse has both direct escalators and a mezzanine-level transfer passage connected by stairs; the Sakurabashi concourse has gates on ground level but is primarily on the mezzanine level, connected to the central concourse by a corridor; and the Bridge Gate is on the third level above the platforms, and connected by escalators and elevators.

Platforms and tracks are on the second floor. There were previously six island platforms and one side platform serving 13 tracks; the highest-numbered track was Track 11, as the Osaka Loop Line tracks were referred to as "Inner Loop" and "Outer Loop" only. In preparation for the construction of the new north building, the sixth platform was closed and the seventh was removed altogether; at the same time, the remaining platforms were renumbered so that Tracks 1 and 2 were for the Osaka Loop Line, and so on. The sixth platform reopened on 20 December 2009 and there became five island platforms and a side platform serving 11 tracks in total (up to the new Track 11—the old Track 9). The remainder of the old Track 11 platform, on the west side of the station, is now used as a pedestrian walkway linking the North Gate Building with its parking garage. There was originally a through track in between tracks 8 and 9, but it had been long disused; during the closure of Track 11, the platform for Tracks 9 and 10 was expanded and this track was used temporarily as Track 9. Since 12 October 2010, this track has been used permanently as Track 8 after the widening of the adjoining platform.

for the north area of the Kansai region via the Fukuchiyama Line (No. 3, 4)