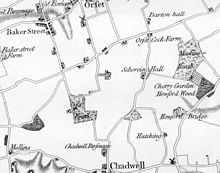 Orsett Heath is a location and recently built hamlet in the unitary authority of Thurrock, in the ceremonial county of Essex. It is located about twenty miles away from London. Nearby settlements include the towns of Tilbury and Grays Thurrock and the villages of Orsett and Chadwell St Mary. For transport there is the A13 road (England), the A1089 road and the A1013 road nearby. The nearest railway station is Tilbury Town railway station. There is also the Gateway Community collage about an eighth of a mile away.

At one time, Orsett Heath was probably part of a large swathe of heathland iterspaced with woodland. This included Biggin Heath (heathland belonging to the manor of Biggin), Chadwell Heath (heathland belonging to the manor of Chadwell St Mary, not the place near Romford), Mucking Heath, Orsett Heath, Socketts Heath and Terrel's Heath all of which were on high ground compared to the nearby marsh and had poor sandy soil with underlying gravel and chalk.[1]