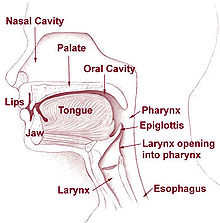 Speech production is the process by which spoken words are selected to be produced, have their phonetics formulated and then finally are articulated by the motor system in the vocal apparatus. Speech production can be spontaneous such as when a person creates the words of a conversation, reaction such as when they name a picture or read aloud a written word, or a vocal imitation such as in speech repetition.

Speech production is not the same as language production since language can also be produced manually by signs.

In ordinary fluent conversation people pronounce each second roughly four syllables, ten or twelve phonemes and two to three words out of a vocabulary that can contain 10 to 100 thousand words.[1] Errors in speech production are relatively rare occurring at a rate of about once in every 900 words in spontaneous speech.[2] Words that are commonly spoken or learned early in life or easily imagined are quicker to say than ones that are rarely said, learnt later in life or abstract.[3][4]

Normally speech is created with pulmonary pressure provided by the lungs that generates sound by phonation in the glottis in the larynx that then is modified by the vocal tract into different vowels and consonants. However speech production can occur without the use of the lungs and glottis in alaryngeal speech by using the upper parts of the vocal trait. An example of such alaryngeal speech is Donald Duck talk.[5]

The vocal production of speech is usually associated with the production of synchronized hand gestures that act to enhance the comprehensibility of what is being said.[6]

The first is the processes of conceptualization in which the intention to create speech links a desired concept to a particular spoken word to be expressed. Here the preverbal intended messages are formulated that specify the concepts to be verbally expressed. This is a competitive process in which an appropriate word is selected among a cohort of candidates.[1][7][8]

The second stage is formulation in which the linguistic form required for that word's expression is created. This process involves such processes as the generation of a syntactic frame, and phonological encoding which specifies the phonetic form of the intended utterance. At this stage a lemma is picked that is the abstract form of a word that lacks any information about the sounds in it (and thus before the word can be pronounced). It contains information concerning only meaning and the relation of this word to others in the sentence.[1][7][8]

The third stage is articulation which involves the retrieval of the particular motor phonetics of a word and the motor coordination of appropriate phonation and articulation by the lungs, glottis, larynx, tongue, lips, jaw, and other parts of the vocal apparatus.[7]

Speech production motor control in right handers depends mostly upon areas in the left cerebral hemisphere. These areas include the bilateral supplementary motor area, the left posterior inferior frontal gyrus, the left insula, the left Primary motor cortex and temporal cortex.[9] There are also subcortical areas involved such as the basal ganglia and cerebellum.[10][11] The cerebellum aids the sequencing of speech syllables into fast, smooth and rhythmically organized words and longer utterances.[11]

Speech production can be affected by several disorders: