Not to be confused with the Oroch and Orok peoples of Russia.

The Oroqen people (simplified Chinese: 鄂伦春族; traditional Chinese: 鄂倫春族; pinyin: Èlúnchūn zú; Mongolian: Orčun; also spelt Orochen or Orochon) are an ethnic group in northern China. They form one of the 56 ethnic groups officially recognized by the People's Republic of China. According to the 2000 Census, 44.54% live in Inner Mongolia and 51.52% along the Heilongjiang River (Amur) in the province of Heilongjiang. The Oroqin Autonomous Banner is also located in Inner Mongolia.

The Oroqens are mainly hunters and it is customary of them to use animal fur and skins for clothing. Many of them have given up hunting and adhered to laws that aimed to protect wildlife in the People's Republic of China. The government is said to have provided modern dwellings for those who have left behind the traditional way of life. The Oroqen are represented in the People's Congress by their own delegate and they are a recognized ethnic minority.

The Oroqen ethnic group is one of the oldest ethnic groups in northeast China. Their name Oroqen, means "people using reindeer" (in Mongolian, it means "Guruchin"), it is a name they gave themselves. The ancestor of the Oroqens originally lived in the vast area south of the Outer Xing'an Mountains and north of Heilongjiang. They once formed part of the ancient people known as the Shiwei. In the 17th century, following the invasions by Russia, some Oroqens moved to the area near the Greater and Lesser Xing'an Mountains.

The Oroqen are exogamous and only marriages among members of different clans are permitted. The traditional dwelling is called a sierranju (Chinese: xierenzhu) is covered in the summer with birch bark and in the winter with deer furs. These dwellings have conical forms and are made out of 20 to 30 pine sticks. The dwellings are usually about six meters of diameter and five meters of height. In the center a fire is placed that serves so much as of a kitchen and as of source of lighting. Birch bark is an important raw material in the traditional culture next to the furs. It served for the preparation of containers of all types, from the manufacture of children cradles to boats. With respect to the reindeer herding Evenki, Oroqen and Nanai, which all shared the use of birch bark, it can be said that these cultures are part of a "birch bark" culture. 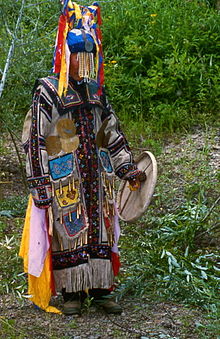 This is a photo of Chuonnasuan (1927-2000), the last shaman of the Oroqen people, taken by Richard Noll in July 1994 in Manchuria near the Amur River border between the People's Republic of China and Russia (Siberia). Oroqen shamanism is now extinct.

Until the early 1950s the main religion of the nomadic Oroqen was shamanism. In the summer of 1952 cadres of the Chinese communist party coerced the leaders of the Oroqen to give up their "superstitions" and abandon any religious practices. These tribal leaders, Chuonnasuan (Meng Jin Fu) and Zhao Li Ben, were also powerful shamans. The special community ritual to "send away the spirits" and beg them not to return was held over three nights in Baiyinna and in Shibazhan.

The last living shaman of the Oroqen, Chuonnasuan (Meng Jin Fu), died at the age of 73 on 9 October 2000. His life, initiatory illness, and training as a shaman are detailed in a published article, also online available.[1]

Sacrifices to ancestral spirits are still routinely made, and there is a folk psychological belief in animism.

Traditionally the Oroqen have a special veneration for animals, especially the bear and the tiger, which they consider their blood brothers. The tiger is known to them as wutaqi which means "elderly man" while the bear is amaha which means "uncle“.