Orne (Moselle)
For the river in Normandy, see Orne (river). 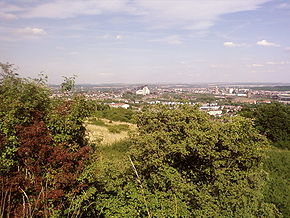 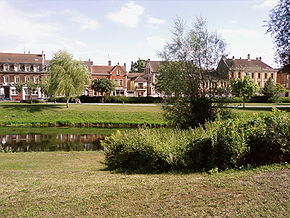 The Orne is a river in Lorraine, north-eastern France, which is a left tributary of the Moselle and sub-tributary of the Rhine. Its source is in the hills northeast of Verdun. It flows east and joins the Moselle near Mondelange, between Metz and Thionville.

"Orne" may originate from autura (a river, cf. Eure), or onna (a river)[citation needed] as mentioned in Endlicher's glossary of Gallic names De nominibus Gallicis, in which these words are translated into Latin as flumen.

If so, then there is no relationship with the name of the Orne river in Normandy, which is referred to as the Olina by Ptolemy, a homonym of Fluvius Olne, the Orne saosnoise in Sarthe, which Xavier Delamarre[1] traces back to the Celtic olīnā (elbow).

The Orne is a substantial river, similar to its neighbours in the West Lorraine region which rise in the Côtes de Meuse.

Flow rates of the Orne at Rosselange

The Orne's flow rate has been measured over a period of 40 years (1967-2007) at Rosselange, located in the Moselle department a short way upstream of the confluence.[3] The watershed of the Orne at Rosselange is 1,226 km2, almost its entire watershed of 1,268 km2.

The mean annual flow rate, or discharge of the river at Rosselange is 12.6 m3/s.

The Orne exhibits strongly marked seasonal fluctuations, such as are very often found in the east of France, with high water in winter/spring bringing the monthly average up to between 20.2 and 26.9 m3/s from December to March inclusive, with a maximum in February. Summer low waters are quite prolonged, from June to early October, with a low monthly average of 2.81 m3/s in September. These monthly figures, however, are just averages, and conceal even more pronounced short-term variation.

At low water, the 3-year low instantaneous flow rate can drop to 0.56 m3/s, as is seen frequently for rivers of the region.

Flooding of the Orne can be very significant. The maximum instananeous flow rate ever recorded was 318 m3/s on 22 December 2003, while the maximum recorded daily average was 292 m3/s on the preceding day. The Orne's instantaneous maximum flow rate for 2 and 5 years (IMFR2 and IMFR5) are 170 and 230 m3/s respectively; the IMFR10 is 280 m3/s, the IMFR20 is 320 m3/s, and the IMFR50 is 370 m3/s. These figures indicate that the flood of December 2003 was, roughly speaking, a twenty-year event and thus not particularly unusual. The Orne's IMFRs are over half that of the Meurthe, the Moselle's most significant French tributary and whose basin is almost 2.5 time larger.

The Orne is fed by heavy rainfall in the western part of its watershed. The runoff curve number in its watershed is 326 mm annually, which is almost equal to the average of all France, but clearly less than the average in the French part of the Moselle basin (445 mm at Hauconcourt). The specific flow rate reaches 10.3 litres per second per square kilometre of watershed.

Flow rates of members of the Orne basin