Origin of the Azeris

Origin of the Azeris

The Azerbaijani are of mixed ethnic origin, the oldest element deriving from the indigenous population of eastern Transcaucasia and possibly from the Medians of northern Persia. This population was Persianized during the period of the Sassanian dynasty of Iran (3rd–7th century ce). Turkicization of the population can be dated from the region’s conquest by the Seljuq Turks in the 11th century and the continued influx of Turkic populations in subsequent centuries, including those groups that migrated during the Mongol conquests in the 13th century. (The greater portion of the tribes that formed the Mongol forces or were stimulated by the Mongol conquest to migrate were Turkic.)[1]

The Caucasian origin of the Azeris defines a link between Azeris and their pre-Turkification Caucasian past and mostly applies to the Azeri's of the Caucasus, most of whom are now inhabitants of what is now the Republic of Azerbaijan. There is evidence that, despite repeated invasions and migrations, aboriginal Caucasians may have been culturally assimilated, first by Iranians, such as the Alans, and later by the Oghuz Turks. Considerable information has been learned about the Caucasian Albanians including their language, history, early conversion to Christianity, and close ties to the Armenians. Many academics believe that the Udi language, still spoken in Azerbaijan, is a remnant of the Albanians' language.[2]

This Caucasian influence extended further south into Iranian Azarbaijan. During the 1st millennium BCE, another Caucasian people, the Mannaeans (Mannai) populated much of this area. This ancient country was in northwestern Iran, south of Lake Urmia. During the period of its existence in the early 1st millennium bc, Mannai was surrounded by three major powers: Assyria, Urartu, and Media. With the intrusion of the Scythians and the rise of the Medes in the 7th century, the Manneans lost their identity and were subsumed under the term Medes[3].

Although genetic testing proves the Turkification of the region rather than the Azeri Turks being descendants of migrants from Central Asia, it also shows that the region is a mixed one. Though the population of Azerbaijan is culturally diverse, genetic testing has revealed common genetic markers that support an autochthonous background for most Azeri Turks. There is evidence of limited genetic admixture derived from Central Asians (specifically Haplogroup H12), notably the Turkmen, that is higher than that of their neighbors, the Georgians and Armenians.[4] MtDNA analysis indicates that the main relationship with Iranians is through a larger West Eurasian group that is secondary to that of the Caucasus, according to a study that did not include Azeri Turks, but Georgians who have clustered with Azeri Turks in other studies.[5] The conclusion from the testing shows that the Azeri Turks of the republic are a mixed population with relationships, in order of greatest similarity, with the Caucasus, Iranians and Near Easterners, Europeans, and Turkmen. Other genetic analysis of mtDNA and Y-chromosomes indicates that Caucasian populations are genetically intermediate between Europeans and Near Easterners, but that they are more closely related to Near Easterners overall.[6]
Another study, conducted in 2003 by the Russian Journal of Genetics, compared Iranian-language speakers of the Republic of Azerbaijan (the Talysh and Tats) with Turkic Azerbaijanis (Azeri Turks) and found that the genetic structure of that populations, compared with the other Iranian-speaking populations (Persians from Iran, Ossetins, and Tajiks), were closer to Turkic Azerbaijanis than to Iranian-speaking populations elsewhere.[7]

In 2006 M. Regueiro and A.M. Cadenas of Stanford University show that the population of central Iran (Isfahan) group to Caucasian Azeri people more than population of Turkey in terms of haplogroup distributions and genetic homogeneity.[8]

The Iranian origin of the Azeris defines a link between present-day Azeris and their pre-Turkification Iranian past and mostly applies to Iranian Azeris. It is supported by historical accounts, by the existence of the Old Azari language, present day place names, cultural similarities between Iranian peoples and Azeris, and archaeological and ethnical evidence. It is also favored by notable scholars and sources, such as Vladimir Minorsky, Richard Frye, Xavier De Planhol, Encyclopaedia of Islam, Encyclopædia Iranica, Encyclopædia Britannica, Grand Dictionnaire Encyclopedique Larousse, and World Book Encyclopedia.

According to Vladimir Minorsky, around the 9th-10th century:

Professor. Ighrar Aliyev also mentions that the Arab historians Baladhuri, Masudi, Ibn Hawqal and Yaqut have mentioned this language by name.[11] Medieval historians and scholars also record that the language of the region of Azerbaijan, as well as its people there, as Iranians who spoke Iranian languages. Among these writes are Al-Istakhri, Al-Masudi, Ibn al-Nadim, Hamzeh Esfahani, Ibn Hawqal, Al-Baladhuri, Moqaddasi, Yaghubi, Hamdallah Mostowfi, and Al-Khwarizmi.[12]

Ebn al-Moqaffa’ (d. 142/759) is quoted by ibn Al-Nadim in his famous Al-Fihrist as stating that Azerbaijan, Nahavand, Rayy, Hamadan and Esfahan speak Pahlavi (Fahlavi) and collectively constitute the region of Fahlah.[13]

A very similar statement is given by the medieval historian Hamzeh Isfahani when talking about Sassanid Iran. Hamzeh Isfahani writes in the book Al-Tanbih ‘ala Hoduth alTashif that five "tongues" or dialects, were common in Sassanian Iran: Pahlavi (Fahlavi), Dari, Parsi (Farsi), Khuzi and Soryani. Hamzeh (893-961 A.D.) explains these dialects in the following way:

It should be noted that Ibn Hawqal mentions that some areas of Armenia are controlled by Muslims and others by Christians.[16]

Al-Moqaddasi (d. late 4th/10th cent.) considers Azerbaijan as part of the 8th division of lands. He states: "The languages of the 8th division is Iranian (al-‘ajamyya). It is partly partly Dari and partly convoluted (monqaleq) and all of them are named Persian".[18]

Al-Moqaddasi also writes on the general region of Armenia, Arran and Azerbaijan and states:

Ahmad ibn Yaqubi mentions that the "People of Azerbaijan are a mixture of ‘Ajam-i Azari (Ajam is a term that developed to mean Iranian) of Azaris and old Javedanis (followers of Javidan the son of Shahrak who was the leader of Khurramites and successed by Babak Khorramdin)."[20]

Zakarrya b. Moháammad Qazvini's report in Athar al-Bilad, composed in 674/1275, that "no town has escaped being taken over by the Turks except Tabriz" (Beirut ed., 1960, p. 339) one may infer that at least Tabriz had remained aloof from the influence of Turkish until the time.[21]

From the time of the Mongol invasion, most of whose armies were composed of Turkic tribes, the influence of Turkish increased in the region. On ther hand, the old Iranian dialects remained prevalent in major cities. Hamdallah Mostawafi writing in the 1340s calls the language of Maraqa as "modified Pahlavi"(Pahlavi-ye Mughayyar). Mostowafi calls the language of Zanjan (Pahlavi-ye Raast). The language of Gushtaspi covering the Caspian border region between Gilan to Shirvan is called a Pahlavi language close to the language of Gilan.[22]

Even after the Turkic invasions and subsequent Turkification of the area, which lasted several centuries, travelers and scholars cited Persian being used up to the 17th century in Tabriz. Even the Ottoman Turkish explorer Evliya Çelebi (1611–1682) mentions this in his Seyahatname. He also reports that the elite and learned people of Nakhichevan and Maragheh spoke Pahlavi, during his tours of the region. Additionally, the old Pahlavi-based language of Azerbaijan is now extinct.

Also, the Brockhaus and Efron Encyclopedic Dictionary, published in 1890, writes that Azeri's are only linguistically Turkic and Iranians by race:

The book Man, published in 1901, comes to the same conclusion:

According to Professor Vladimir Minorsky:

According to Professor Xavier De Planhol:

According to Professor. Tadeusz Swietochowski: 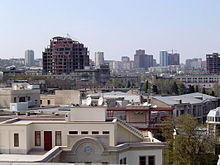 The name Baku is widely believed to be derived from the old Persian names of the city Badkube, meaning "city where the wind blows", or Baghkuh, meaning "Mount of God".

Many place names in the present day Republic of Azerbaijan and Iranian Azarbaijan have Persian roots. Tabriz, Baku, Absheron, Ganja, and the country (as well as people) name itself Azerbaijan, are just a few examples. Also, many of the cities in these regions were founded before Turkic tribes reached the area. The first mention of Baku was in 885, before the Turkic invasions of the 10th and 11th centuries.

Archaeological evidence discovered in these regions show a large Zoroastrian, a monotheistic Iranian religion, influence along with an Iranian presence of more than 3000 years, starting with the settlement of the Medes in the area, both of which shaped the Iranian identity of the region that lasted until the Turkic invasions.[32] However, no evidence has been discovered that the Huns ever created permanent settlements in the area, as some Turkish historians claim.[33]

Scholars see cultural similarities between modern Persians and Azeris as evidence of an ancient Iranian influence.[34] Azeri's celebrate a number of Iranian holidays, most notably Norouz. Researchers also describe the lives of Azeri villagers and Persian villagers to be very similar in terms of tradition and culture. The literature of the region was also written in Persian, with writers such as Qatran Tabrizi, Shams Tabrizi, Nezami[disambiguation needed

], and Khaghani, writing in Persian prior to and during the Oghuz invasions.

Also, remnants of former Iranian tribes that survived Turkification also provides evidence of the Iranian character of Azeri's. The Talyshs and Tats are both an Iranian people who speak Iranian languages, with Tats speaking a dialect of Persian.[35][36]

A recent study of the genetic landscape of Iran was completed by a team of Cambridge geneticists led by Dr. Maziar Ashrafian Bonab (an Iranian Azarbaijani).[37] Bonab remarked that his group had done extensive DNA testing on different language groups, including Indo-European and non Indo-European speakers, in Iran.[9] The study found that the Azeris of Iran do not have a similar FSt and other genetic markers found in Anatolian and European Turks. However, the genetic Fst and other genetic traits like MRca and mtDNA of Iranian Azeris were identical to Persians in Iran. Some new genetic studies suggest that recent erosion of human population structure might not be as important as previously thought, and overall genetic structure of human populations may not change with the immigration events and thus in the Azerbaijanis' case; the Azeris of the Azerbaijan Republic most of all genetically resemble to other Caucasian people like Armenians,[38] and people the Azarbaijan region of Iran to other Iranians.[39]

The Azeris in Iran and the Azeris in the Republic of Azerbaijan are not exactly the same people ethnically,[38][39] although have linguistic,historic and religious bonds. This is supported by genetic testing that has shown Azeris in the republic of being mainly of Caucasian descent, while Azeris in Iran being of Iranic descent. Encyclopædia Britannica states:

Ibn al-Athir, an Arab historian, declared that the Oghuz Turks had come to Transoxiana in the period of the caliph Al-Mahdi in the years between 775 and 785. In the period of the Abbasid caliph Al-Ma'mun (813 – 833), the name Oghuz starts to appear in the works of Islamic writers. By 780, the eastern parts of the Syr Darya were ruled by the Karluk Turks and the western region (Oghuz steppe) was ruled by the Oghuz Turks.

Oghuz dominance in Southwestern Asia begins in the 11th century, with the Seljuk Empire. The Southwestern Turkic dialects gradually supplanted the Tat[disambiguation needed

], Azari, and Middle Persian dialects in northern Iran, and a variety of Caucasian languages in the Caucasus, particularly Udi, and had become the dominant during the High to Late Medieval period, under the rule of the White Sheep Turkomans and Black Sheep Turkomans (14th to 15th century), the process of Turkification being mostly complete by the Safavid period (16th century).