Organoaluminium compounds generally feature three- and four-coordinate Al centers, although higher coordination numbers are observed with inorganic ligands such as fluoride. In accord with the usual trends, four-coordinate Al prefers to be tetrahedral. In contrast to boron, aluminium is a larger atom and easily accommodates four carbon ligands. The triorganoaluminium compounds are thus usually dimeric with a pair of bridging alkyl ligands, e.g., Al2(C2H5)4(μ-C2H5)2. Thus, despite its common name of triethylaluminium, this compound contains two aluminium centres, and six ethyl groups. When the organoaluminium compound contain hydride or halide, these smaller ligands tend to occupy the bridging sites. Three coordination occurs when the R groups is bulky, e.g. Al(Mes)3 (Mes = 2,4,6-Me3C6H2 or mesityl) or isobutyl.[4] 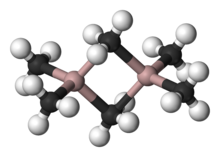 The trialkylaluminium dimers often participate in dynamic equilibria, resulting in the interchange of bridging and terminal ligands as well as ligand exchange between dimers. Even in noncoordinating solvents, Al-Me exchange is fast, as confirmed by proton NMR spectroscopy. For example, at −25 °C the 1H NMR spectrum of Me6Al2 comprises two signals in 1:2 ratio, as expected from the solid state structure. At 20 °C, only one signal is observed because exchange of terminal and bridging methyl groups is too fast to be resolved by NMR. The high Lewis acidity of the monomeric species is related to the size of the Al(III) center and its tendency to achieve an octet configuration.

The first organoaluminium compound with a Al-Al bond was reported in 1988 as (((Me3Si)2CH)2Al)2 (a dialane). They are typically prepared reduction of the dialkylaluminium chlorides by metallic potassium:[5]

Another notable group of alanes are tetraalanes containing for Al(I) centres. These compounds adopt a tetrahedrane core, as illustrated by (Cp*Al)4 and ((Me3Si3C)Al)4. The cluster [Al12(i-Bu)12]2- was obtained from related investigations on the reduction of organoaluminium compounds. This dianion adopts an icosahedral structure reminiscent of dodecaborate ([B12H12]2-). Its formal oxidation state is less than one.

From alkyl halides and aluminium

Industrially, simple aluminium alkyls of the type Al2R6 (R = Me, Et) are prepared in a two-step process beginning with the alkylation of aluminium powder:

The reaction resembles the synthesis Grignard reagents. The product, (CH3CH2)3Al2Cl3, is called ethylaluminium sesquichloride. The term sesquichloride refers to the fact that, on average, the Cl:Al ratio is 1.5. These sesquichlorides can be converted to the triorganoaluminium derivatives by reduction:

For nonbulky R groups, the organoaluminium hydrides are typically trimeric. In a subsequent step, these hydrides are treated with more alkene to effect hydroalumiunation:

Organoaluminium compounds can react with alkenes and alkynes in carboalumination. Monoaddition is only possible when the alkene is substituted. The reaction is regioselective for 1-alkenes. [7] The so-called ZACA reaction is an example of an asymmetric carboalumination.

Although the simple members are commercially available at low cost, many methods have been developed for their synthesis in the laboratory, including metathesis or transmetalation. Metathesis of aluminium trichloride with RLi or RMgX gives the trialkyl:

Organoaluminium compounds are hard acids and readily form adducts with bases such as pyridine, THF and tertiary amines. These adducts are tetrahedral at Al.

The Al-C bond is polarized such that the carbon is highly basic. Acids react to give alkanes. For example, alcohols give alkoxides:

A wide variety of acids can be employed beyond the simple mineral acids. Amines give amido derivatives. With carbon dioxide, trialkylaluminium compounds give the dialkylaluminium carboxylate:

The conversion is reminiscent of the carbonation of Grignard reagents.

With oxygen one obtains the corresponding alkoxides, which can be hydrolysed to the alcohols:

Industrially, organoaluminium compounds can be used as catalysts for alkene polymerization to polyolefins, for example the catalyst methylaluminoxane.