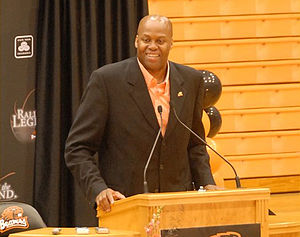 Coach Robinson in his introductory press conference as head coach 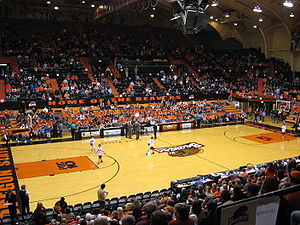 The Oregon State Beavers men's basketball program, established in 1901, is the intercollegiate men's basketball program of the Oregon State University Beavers. The program is classified in the NCAA's Division I, and the team competes in the Pacific-12 Conference. The team is coached by Craig Robinson. OSU is the 15th winningest program of all time as of the end of the 2008-09 season with a record of 1,594 wins and 1,180 losses.[1] The team plays home games in Gill Coliseum.

The Oregon State men's basketball team has had 20 head coaches and one interim head coach. Both Slats Gill and Ralph Miller are members of the Naismith Memorial Basketball Hall of Fame. The current coach, Craig Robinson, was hired by OSU in 2008 out of Brown University, where Robinson had just coached the Bears to a school record 19 wins.[2] Robinson is the brother of United States first lady Michelle Obama, and the brother-in-law to United States President Barack Obama.[3] The longest tenured coach is Slats Gill, who was the coach for 36 seasons, winning 599 games in the process.

Washington State Cougars — The Cougars and Beavers are longtime Pac 12 (and regional) rivals.

The team currently has 15 players on the roster.[4]

Oregon State has had 75 all-conference and 32 All-America selections, five Pac-10 Players of the Year, 42 players selected in the NBA Draft, and 24 players that have gone on to play in the NBA.[2][5] Additionally, OSU basketball alumni have 4 gold medals at the Olympics, including one by Lew Beck, who never played in the NBA. A total of 7 players have won 11 NBA titles, including three by A. C. Green, two by Brent Barry, two by Mel Counts, and one each by Red Rocha, Dave Gambee, Lonnie Shelton, and Gary Payton.[6]

The players who have gone on to play in the NBA are: 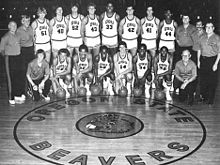 The Orange Express with Steve Johnson as #33.

The 1980-1981 Oregon State men's basketball season was arguably one of the best and ironically most upsetting basketball seasons in Oregon State history. The team was referred to as the Orange Express and was led by Beaver legendary coach Ralph Miller.[7][8][9] The Orange Express season was Beaver great, Steve Johnson's, last year at OSU. This season would be the first time in OSU history that the Beavers would win at UCLA. The Orange Express spent a school record 25 weeks as #1 in the polls while finishing with a 26-2 record. At 26-1 the team would go into the NCAA tournament as a number one seed and were upset by number eight seed Kansas State 50-48. Miller was awarded UPI and AP Coach of the Year honors and Steve Johnson would receive All-American honors.[7] Throughout 1980-83 OSU held a 77-11 record which at the time was only bested by DePaul's 79-6 record. This record would include a 35-1 record at Gill Coliseum including a school best 24 wins in a row.[7]