The Ordnance QF 25-pounder Short was an Australian variant of the British Ordnance QF 25-pounder field gun/howitzer. The gun was developed by modifying the 25-pounder's design to improve its mobility during jungle warfare. Development began in 1942, and the weapon first entered service with the Australian Army the next year. It was used by several Royal Australian Artillery regiments during fighting in the South West Pacific Area, before being declared obsolete in 1946.

The development of the Ordnance QF 25-pounder Short was an important achievement for Australia's defence industry, and provided the Army with a weapon suited to conditions in the South West Pacific. Nevertheless, the gun's performance was inferior to that of the standard 25-pounder, and it received a mixed reception from artillerymen.

The Australian Army began to be equipped with British-built 25-pounder guns in 1940. The gun proved successful, and was the standard equipment of Australian field batteries by 1943.[6] In January 1940, the Australian Government approved a proposal to build 25-pounders in Australia. A Government-owned factory was constructed at Maribyrnong in Melbourne and commercial industry was contracted to produce additional guns. Almost all the guns' components were manufactured in Australia, with almost 200 firms providing parts. The first Australian-built 25-pounder was completed in May 1941 and 1,527 guns were delivered before production ceased at the end of 1943.[7]

The 25-pounder was well suited to the open conditions the Army experienced in the Mediterranean and Middle East theatres but proved difficult to deploy in jungle terrain. While the developed road network in Malaya allowed it to be moved by vehicles during the Malayan Campaign, the rugged terrain and limited transport infrastructure in New Guinea meant that the guns could only be moved away from coastal plains and airfields by manhandling.[8] As a result, Australian infantry often had no artillery support heavier than 3 inch mortars during the New Guinea Campaign in 1942.[9]

The difficulty of deploying artillery in New Guinea led to a need for a gun which could be broken down into light parts and transported by aircraft or jeeps.[9] The Army had only a small number of British 3.7 inch Mountain Howitzers, and Australia's request for United States M116 75mm pack howitzers was not immediately filled.[10] In September 1942, the Army's Director of Artillery, Brigadier John O'Brien, suggested that a variant of the 25-pounder be developed to meet this requirement.[9] This proposal was agreed to, and all development work was conducted in Australia by the Army, the Ordnance Production Directorate and Charles Ruwolt Pty Ltd.[5] The process of designing the gun began in September 1942, and an acceptable weapon was ready by January the next year. The three agencies cooperated well as they were strongly motivated to provide the Army with a useful light artillery piece as quickly as possible.[11] During this period, the Army received thirty-eight 75mm pack howitzers, and deployed some of these guns to New Guinea.[12] 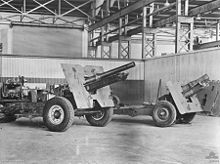 Standard (left) and Short (right) 25-pounders. This is the prototype, which was fitted with a gun shield that was later removed.

The new gun used as many standard 25-pounder parts as possible, but included a number of major differences in order to reduce the weapon's weight.[13] Modifications included shortening the gun's barrel and recuperator, making the trail lighter, and incorporating the new recoil system which had been developed to allow 25-pounders to be mounted in the Australian-designed Sentinel tank.[5] The guns weighed 1.25 tons, had a 49.825 inches (1,266 mm) long barrel and a maximum range which was approximately 87 percent that of the standard gun.[9][5] The QF 25-pounder Short could use three standard charges to obtain a range of up to 10,400 yards (9,500 m). This range could be extended to 11,500 yards (10,500 m) if a super charge was used, though standing instructions warned against doing so except in emergencies due to the strain these charges placed on the gun carriage.[5] The gun could fire the same variety of ammunition as the standard 25-pounder; namely high explosive, armour piercing, smoke, gas, propaganda and illumination shells.[1] While the prototype gun was fitted with a gun shield, this was later removed and not incorporated into the production weapons.[13]

The QF 25-pounder Short incorporated a number of design features which sought to increase its mobility. The gun could be broken down into 13 or 14 parts in under two minutes, allowing it to be air dropped from aircraft or packed into Jeeps.[9][13][5] Of these parts, only the recuperator and front trail weighted over 135 kilograms (300 lb).[13] Assembled guns could also be towed by a Jeep, which was advantageous as it was possible to transport these vehicles inside of aircraft.[5] The gun carriage was very different to that in the standard 25-pounder, and included a new cradle, trail and axles. The guns were initially fitted with stabilisers to reduce stress on their wheels when firing, but these were later removed as they caused problems when reversing or running up the guns in action.[9]

Initial testing of the prototype QF 25-pounder Short was completed in early December 1942.[2] The 2/1st Field Regiment also trialled the gun in New Guinea during early 1943.[14] Large-scale production began in early 1943, after minor modifications were made to the design, and the Army placed an initial order for 112 guns.[2][13] A second order was later placed for 100 more. This lot incorporated the Mark II carriage, which had larger wheels and tyres to prevent the problem with wheel bounce encountered by the first lot. Altogether, 213 guns were manufactured by the time production ceased in 1944.[15] As completed, the gun's full designation was Ordnance QF 25-pounder Short (Aust) Mark I, but it was nicknamed the 'snort' by Australian soldiers.[9] 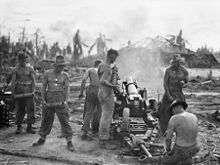 QF 25-pounder Short guns were first issued to Australian Army units in August 1943, and one of each field artillery regiments three batteries was re-equipped with the new guns.[9] [16] Field batteries equipped with the guns normally consisted of a headquarters and two troops each with four guns, seven jeeps and a D6 tractor.[17] Like the standard 25-pounder, each gun had a crew of six men.[1] The commander of New Guinea Force's artillery, Brigadier L.E.S. Barker, preferred the 75mm pack howitzer to the 25-pounder Short, and tried to prevent the new gun being issued, but was over-ruled by Brigadier O'Brien.[14] The guns were first used in action by the 7th Division during the landing at Nadzab, when a detachment of the 2/4th Field Regiment was dropped by parachute with two guns.[2] One gun was assembled and ready to fire within an hour, but the buffer and recuperator of the other took two days to locate in the long grass.[18] The QF 25-pounder Short continued to be used by some Australian artillery units in New Guinea, the Solomon Islands and Borneo until the end of the war, and was declared obsolete in 1946.[19]

The QF 25-pounder Short received a mixed reception by the Army. Some artillerymen complained about the gun's sharp recoil, and the short barrel and absence of a shield meant that its crew were exposed to a heavy blast effect when it was fired.[2] Guns were sometimes put out of action by damage caused by the absorption of violent recoil. The gun also had a tendency to tilt at low elevation; this was remedied by its crew standing on the trails, an expedient that had previously been used with the QF 4.5 inch Howitzer. Other limitations included a low rate of fire (three or four rounds per minute) and difficulties towing the weapon.[18] Concerns were also raised over the quality of workmanship, and the commander of the 2/4th Field Regiment rejected a batch of Short 25-pounders sent to his unit before the Nadzab operation in the belief that they had been poorly manufactured. Inspectors subsequently concluded that most of his criticisms were unfounded, however.[20] The most important deficiency compared to the regular 25-pounder was the shorter range. As a result of its experience with the gun, the 9th Division recommended that they be pooled and reserved for their special role rather than be employed in a day-to-day role alongside the regular 25 pounder.[18]

Post-war assessments of the gun's performance are generally positive. The Australian official history acknowledged the QF 25-pounder Short's limitations, but argued that these were the result of it being developed to perform a specialised role for which some trade-offs in performance were needed, and that on balance it was a successful weapon.[2] Historian and retired Major General Steve Gower has assessed the gun as being "undoubtedly one of the more significant Australian weapon developments of the Second World War" as it represented a success in adapting a foreign-designed weapon to meet the Australian Army's requirements.[13] British historian Chris Henry has also written that the gun "gave good service, and was robust enough to survive life in the jungle even though many modifications were needed".[9]