Lynx (or Axe in the North America and France) is a brand of male grooming products, owned by the British/Dutch company Unilever and marketed towards young males. 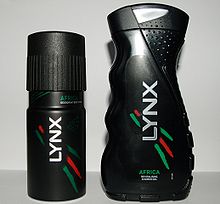 Axe was launched in France in 1983 by Unilever. It was inspired by another of Unilever's brands, Impulse.

Unilever were keen to capitalize on Lynx's French success and the rest of Europe from 1985 onwards, later introducing the other products in the range. Unilever were unable to use the name Axe in the United Kingdom and Ireland due to trademark problems so it was launched as Lynx.[1]

The European launch of the deodorant was followed by success in Latin America and moderate impact in Asia and Africa. In the new millennium, the brand has launched with great success in the United States and Canada. The company has also consolidated its deodorant portfolio by migrating other overlapping male deodorants into the Lynx brand such as South Africa's Ego brand.[citation needed]

From its launch, the annual fragrance variant has played a key part in the success of the brand by offering something new each year. The type of fragrance variants have evolved over time. From 1983 until about 1989, the variant names were descriptions of the fragrances and included Musk, Spice, Amber, Marine, and Oriental.[citation needed]

From 1990 until 1996, geographic names for fragrances were used, such as Africa, Alaska, Java, Nevada, and Inca. From 1996 to 2002, Lynx took inspiration from Calvin Klein fragrances (also owned by Unilever at that time), using the same fragrance consultant, Ann Gottlieb, to develop the scents to launch variants, such as Dimension, Apollo, Dark Temptation, Gravity, and Phoenix.[citation needed]. See an interview of Ann Gottlieb, in which she speaks about Axe fragrance development : http://www.osmoz.com/News-Trends/Interviews/Perfumery-Professions-Ann-Gottlieb

In 2009, the brand launched an 8-centimeter container called the Axe Bullet.[2] The brand has also extended into other areas such as shower gels, aftershaves, and colognes, skin care, shampoo, and hairstyling products. Failed extensions include Underwear, Barbershop[3] and razors.

Most scent names usually have a shower gel to accompany them and sometimes an antiperspirant/deodorant stick.[citation needed]

The 2009 frame has a mint scent.[citation needed]

The Lynx Shampoos come in three different sizes, the regular and most seen 12 fl oz size and the travel or sample size of 1.7 fl oz, 22oz bottles were introduced recently.

Lynx's list of yearly body-spray variants is as follows. Limited edition or short-lived variants are listed in a following table below.

Lynx also launches limited edition variants from time to time that may be on sale for a few months or over a year.[citation needed]

From 2003, Lynx advertisements portrayed various ways the products supposedly helped men attract women. In 2004, the advertising for the Pulse fragrance showed how it supposedly gave geeky men the confidence to dance to get women. This was followed by Touch, Unlimited,[25] Clix,[26] and in 2007, Vice[26] was marketed on a theme of making "nice" women become "naughty".

Adverse publicity has been generated by the product's advertisements for encouraging sexual promiscuity and sexism.[29] The Campaign for a Commercial-Free Childhood claimed that Bartle Bogle Hegarty's work on Axe "epitomizes the sexist and degrading marketing that can undermine girls' healthy development."[30]

On January 12, 2008 12 year old Daniel Hurley from Derbyshire, England died in a hospital five days after collapsing at his home. The medical coroner ruled that he had suffered from cardiac arrhythmia and died from heart failure as a result of spraying large amounts of Lynx in a confined space.[31][32] Videos on social networking sites depicted teens lighting themselves on fire. The trend resulted in multiple injuries.[33] In response to the possible safety concerns,[citation needed] the company created two ads, one against the use of Axe as an inhalant, and the other warning of its flammability.[34]