Order of the Greek Horsemen

Order of the Greek Horsemen 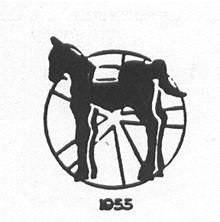 Order of the Greek Horsemen logo, circa 1982

The organization was founded by John Cox, John J. Wilkins, Sonny Seiler, and G. Donald Joel. The society's name is believed to be in reference to the Iron Horse, a legendary 12-foot, 2-ton welded metal sculpture figure created by artist Abbott Pattison in 1954. Since being removed from the University of Georgia campus over 50 years ago, the Iron Horse has been located in Greene County, 18 miles outside of Athens.[2]

The Order's membership includes at least 300 students, alumni and faculty.[citation needed] Alumni include many leaders prominent in business, law, journalism, medicine, and government. Most members were inducted as students, although several honorary members have been inducted. The organization is home to some of the most wealthy and politically connected individuals in the state of Georgia. 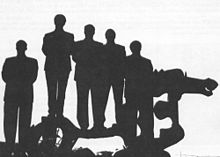 The 2007 initiates of the Order of the Greek Horsemen, photographed on the Iron Horse, with their facial features concealed.

Since the 1970s, the new members of the Order of the Greek Horsemen have been introduced each April at the conclusion of the annual Greek Week Awards Banquet. The new members - who are introduced as "the top five Greek men on campus" - are chosen earlier in the year, and until their introduction during Greek Week, are known only to themselves and the more senior members of the organization. Selection criteria is unknown, but the new members are typically leaders of their fraternity chapters or the Interfraternity Council.[citation needed]

Since 1989, the Horsemen have appeared annually on the cover of the Fraternity Way - the UGA fraternity rush magazine. In the picture, the Horsemen stand on the legendary Iron Horse with shadows covering the new members faces so as to not revel their identity.[3]

Little is known about the activities of the Order of the Greek Horsemen other than the annual announcement of its new members. The organization is rumored to have a highly elaborate initiation ritual, including oath of membership, password, grip and other features typical of college Greek-letter organizations. The only known public communication from the organization was made in April 2000 in a letter published by the UGA student newspaper, The Red and Black, in response to an automobile accident involving several fraternity members, although the accident had nothing to do with the Greek Horsemen or its members. In the letter, the Horsemen write, "The Order of Greek Horsemen was founded to be the guardian of the University's fraternity system. The society is composed of the systems' past and present leaders. For 50 years, the Order of the Greek Horsemen has silently influenced the fraternity system from afar. But, because of recent events, the Horsemen can no longer remain silent."[4] Since that time, the Order of Greek Horsemen has moved back to a highly-secretive stance, and little is known of its members or its activities.

An emblem of the organization, circa 1982, consists of a saddled but unmounted horse super-imposed over a five-spoked wheel. The horse shown in the emblem does not appear to be a direct representation of the Iron Horse. The emblem also includes the numerals 1955, presumably a reference to the organization's year of founding.

In photographs, members of the organization often make a "gun symbol" with their right hand by extending their thumb and index finger (see pictures). The gesture is made by Horsemen in the yearly Interfraternity Council Executive Board picture and then again by all members on the cover of the annual Fraternity Way. The ritual meaning of the gesture, which dates to the earliest years of the organization, is not known.

The story of the Iron Horse

The Iron Horse was unveiled on the University of Georgia campus in front of Reed Hall in 1954 by artist-in-residence Abbott Pattison. The 12-foot, 2-ton welded metal sculpture was a new - and not necessarily welcomed - type of art for a small Southern town. 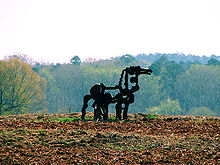 Students painted it, put hay in its mouth and manure behind it, set a mattress aflame under it, and constructed a wooden mockery of it dubbed the "$5000 Modern Mule."

"I was struck with the idea of ancient Athens where people lived with sculpture all around them, and even if they didn't like it, they left it alone.," said Pattison to the Atlanta Journal on May 28, 1954."I wanted Athens, Georgia, to have a piece of sculpture to look at. And I think the least I could have expected, even if they didn't like it, was a little Southern courtesy."

The horse was subsequently removed from campus and put in hiding for a while. In 1958, L.C. Curtis of the University Horticulture Department offered to put the horse on his land in a Greene County field 18 miles outside of Athens. It has remained there since December 1959 along an expansive curve of road, visible to anyone who drives by.

L.C.'s son Jack told the Athens Banner-Herald that they had to put the feet in concrete in the '60s to keep it from being tipped over so often by pranksters. Despite some mild attempts to bring the Iron Horse back to UGA and Athens, the horse has only grown in legend while remaining proudly attached to the Curtis' farm.

Since the time the Iron Horse has been unveiled, the famed piece has had mentions in Time magazine, the Atlanta Journal-Constitution and Atlanta magazine, not to mention all the Athens writers who have written on the subject. A film was even made about the infamous horse in 1979 by William VanDerKloot.

The Iron Horse and the Greek Horsemen

The relationship between the Order of the Greek Horsemen and the mysterious Iron Horse has been the subject of speculation for decades.

In a 1999 article for the Athens Banner-Herald entitled "The Iron Horse still standing proudly," Julie Jordan writes, "There are a few signs scattered around the east side of Athens-Clarke County today that continue the legendary tradition of the University of Georgia's notorious Iron Horse. Block letters on plywood pose a rather ambiguous question: Why? followed by Iorn Horse and then giving readers a directional arrow and mileage to the scenic spot where the horse has stood since December 1959. Judging by these signs and the question Why? posed upon them, it would seem that at least someone believes the horse must have some answers for us. Can the Iron Horse reveal the great mysteries of the universe? And for that matter, who has put up the signs for drivers to ponder as they drift by? Who has used the charmingly Southern-style phonetic spelling of iron (Iorn)? And is this spelling, perhaps, a code?"[5]

Jordan alludes to the annual pilgrimages made to the Iron Horse by members of the Order of the Greek Horsemen, writing, "As for the many rumors of nighttime outings by students and other curious onlookers, (Jack) Curtis says he isn't sure how many people take evening treks out to visit."[5] She also makes reference to an effort in the early 1980s made by Greek Horseman Charlie Fiveash, then president of the Interfraternity Council, to move the Iron Horse back to the University of Georgia campus from the Curtis farm. This effort was resisted by the Curtis family and never materialized.[5]

Jordan closes the Iron Horse article writing, "And so the horse stands, subject of a wealth of stories brought on by the initial negative reaction to its presence on campus. A legend in its own time, the Iron Horse shares its history in Athens with its home in Greene County."[5]

Like other articles about the Iron Horse, Jordan's article leaves many questions unanswered and the essential mystery intact. If the Greek Horsemen possess secret information about their chosen symbol, the legendary Iron Horse, they are unwilling to divulge it to the public.