/əˈtɑːkəpə/)[1] are a Southeastern culture of Native American tribes who spoke Atakapa and historically lived along the Gulf of Mexico. They called themselves the Ishak, pronounced "ee-SHAK", which translates as "The People".[2] Although the people were decimated by infectious disease after European contact, descendants still live in Louisiana and Texas. In 2006 the Atakapa-Ishak met as one people.

Their name was also spelled Attakapa, Attakapas, or Attacapa. Choctaw in origin, it means "man eater", and was the name learned by the Europeans from the Choctaw.[3][4] The peoples lived in river valleys, along lake shores, and coasts from Galveston Bay, Texas to Vermilion Bay, Louisiana.[1]

After 1762, when Louisiana was transferred to Spain, little was written about the Atakapan. Infectious disease epidemics of the late 18th century caused many fatalities among them. Survivors joined the Caddo, Koasati, and other surrounding tribes, although some culturally distinct Atakapan people survived into the 20th century.[5] 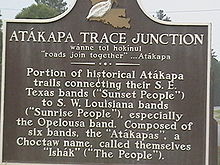 Atakapa-speaking peoples are called Atakapan, while Atakapa refers to a specific tribe. 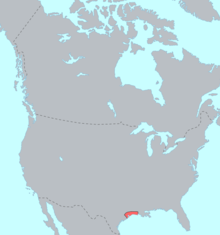 Atakapa oral history says that they originated from the sea. An ancestral prophet laid out the rules of conduct.[9]

The first European contact with the Atakapa may have been in 1528 by survivors of the Spanish Pánfilo de Narváez expedition. Two barges were blown ashore. One met the Karankawa, while the other probably landed on Galveston Island. The latter recorded meeting a group who called themselves the Han, who may have been the Akokisa.[1]

In 1703, Jean-Baptiste Le Moyne, the French governor of La Louisiane, sent three men to explore the coast west of the Mississippi River. The seventh nation they encountered were the Atakapa, who captured and cannibalized one member of their party.[1] In 1714 this tribe was one of 14 who came to Jean-Michel de Lepinay, who was acting French Governor of Louisiana between 1717 and 1718,[10] while he was fortifying Dauphin Island, Alabama.[11]

The Choctaw told the French settlers about the "People of the West," who represented numerous subdivisions or tribes. The French referred to them as le sauvage. The name Atakapa is a Choctaw name meaning "people eater" (hattak 'person', apa 'to eat'),[9] a reference to the practice of ritual cannibalism. The Gulf coast peoples practiced this on their enemies.

A French explorer, Francois Simars de Bellisle, lived among the Atakapa from 1719 to 1721.[1] He described Atakapa cannibalistic feasts which he observed firsthand.[12] The practice of cannibalism likely had a religious, ritualistic basis.

Along the west coast, not far from the sea, inhabit the nation called Atacapas [sic], that is, Man-Eaters, being so called by the other nations on account of their detestable custom of eating their enemies, or such as they believe to be their enemies. In the vast country there are no other cannibals to be met with besides the Atacapas; and since the French have gone among them, they have raised in them so great an horror of that abominable practice of devouring creatures of their own species, that they have promised to leave it off: and, accordingly, for a long time past we have heard of no such barbarity among them.
—Antoine-Simon Le Page du Pratz 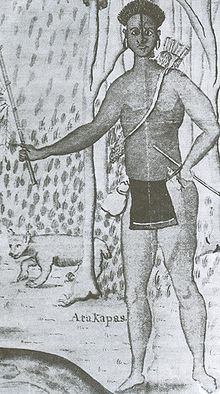 Detail from a drawing by deBatz, 1735

Louis LeClerc Milfort, a Frenchman who spent 20 years living with and traveling among the Muscogee Creek, came upon the Atakapa during his travels. He wrote:[14]

The forest we were then in was thick enough so that none of my men could be seen. I formed them into three detachments, and arranged them in such a way as to surround these savages, and to leave them no way of retreat except by the pond. I then made them all move forward, and I sent ahead a subordinate chief to ascertain what nation these savages belonged to, and what would be their intentions toward us. We were soon assured that they were Atakapas, who, as soon as they saw us, far from seeking to defend themselves, made us signs of peace and friendship. There were one hundred and eighty [180] of them of both sexes, busy, as we suspected, smoke-drying meat. As soon as my three detachments had emerged from the forest, I saw one of these savages coming straight toward me: at first sight, I recognized that he did not belong to the Atakapas nation; he addressed me politely and in an easy manner, unusual among these savages. He offered food and drink for my warriors which I accepted, while expressing to him my gratitude. Meat was served to my entire detachment; and during the time of about six hours that I remained with this man, I learned that he was a European; that he had been a Jesuit; and that having gone into Mexico, these people had chosen him as their chief. He spoke French rather well. He told me that his name was Joseph; but I did not learn from what part of Europe he came. He informed me that the name Atakapas, which means eaters of men, had been given to this nation by the Spaniards because every time they caught one of them, they would roast him alive, but that they did not eat them; that they acted in this way toward this nation to avenge their ancestors for the torture that they made them endure when they had come to take possession of Mexico; that if some Englishmen or Frenchmen happened to be lost in this bay region, the Atakapas welcomed them with kindness, would give them hospitality; and if they did not wish to remain with them they had them taken to the Akancas, from where they could easily go to New Orleans.

He told me: "You see here about one-half of the Atakapas Nation; the other half is farther on. We are in the habit of dividing ourselves into two or three groups in order to follow the buffalo, which in the spring go back into the west, and in autumn come down into these parts; there are herds of these buffalo, which go sometimes as far as the Missouri; we kill them with arrows; our young hunters are very skilful at this hunting. You understand, moreover, that these animals are in very great numbers, and as tame as if they were raised on a farm; consequently, we are very careful never to frighten them. When they stay on a prairie or in a forest, we camp near them in order to accustom them to seeing us, and we follow all their wanderings so that they cannot get away from us. We use their meat for food and their skins for clothing. I have been living with these people for about eleven years; I am happy and satisfied here, and have not the least desire to return to Europe. I have six children whom I love a great deal, and with whom I want to end my days. When my warriors were rested and refreshed, I took leave of Joseph and of the Atakapas, while assuring them of my desire to be able to make some returns for their friendly welcome, and I resumed my Journey.
—Louis LeClerc Milfort

In 1760, the French Gabriel Fuselier de la Claire, coming to the Attakapas Territory, bought all the land between Vermilion River and Bayou Teche from the Eastern Atakapa Chief Kinemo. It was shortly after that a rival Indian tribe, the Appalousa (Opelousas), coming from the area between the Atchalafaya and Sabine Rivers, exterminated the Eastern Atakapa. They had occupied the area between Atchalafaya River and Bayou Nezpique (Attakapas Territory).

William Byrd Powell (1799–1867), a medical doctor and physiologist, regarded the Atakapas as cannibals. He noted that they traditionally flattened their skulls frontally and not occipitally, a practice opposite to that of neighboring tribes, such as the Natchez Nation.[15]

The Atakapa traded with the Chitimacha tribe in historical times.[16] In the early 18th century, some Atakapa married into the Houma tribe of Louisiana.[17] Members of the Tunica-Biloxi tribe joined the Atakapa tribe in the late 18th century.[18]

The Atakapan ate the rhizomes and seeds of the American lotus

The Atapakan ate shellfish and fish. The women gathered bird eggs, the American lotus (Nelumbo lutea) for its roots and seeds, as well as other wild plants. The men hunted deer, bear, and bison, which provided meat, fat, and hides. The women cultivated varieties of maize. They processed the meats, bones and skins to prepare food for storage, as well as to make clothing, tent covers, tools, sewing materials, arrow cases, bridles and rigging for horses, and other necessary items for their survival.[9][19]

The men made their tools for hunting and fishing: bows and arrows, fish spears with bone-tipped points, and flint-tipped spears. They used poisons to catch fish, caught flounders by torchlight, and speared alligators in the eye. The people put alligator oil on exposed skin to repel mosquitoes. The Bidai snared game and trapped animals in cane pens. By 1719, the Atakapan had obtained horses and were hunting bison from horseback. They used dugout canoes to navigate the bayous and close to shore, but did not venture far into the ocean.[19]

In the summer, families moved to the coast. In winters, they moved inland and lived in villages of houses made of pole and thatch. The Bidai lived in bearskin tents. The homes of chiefs and medicine men stood on earthwork mounds made by previous cultures.[9] 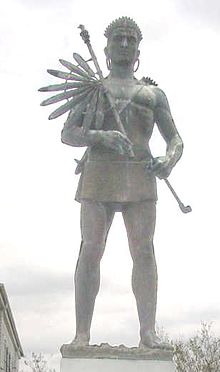 It is believed that most Western Atakapa tribes or subdivisions were decimated by the 1850s, mainly from infectious disease and poverty. Armojean Reon, of Lake Charles, Louisiana, who lived at the turn of the century, was noted as a fluent Atakapa speaker.[20]

Descendants exist and have begun to organize to be recognized as a tribe. Numerous descendants today share a mixed lineage of Atakapa-Ishak and other ethnic ancestry, but they have maintained a sense of community and culture.[21]

The names of present-day towns in the area can be traced back to the Ishak; they are derived both from their language and from French versions of their people and places. The town of Mermentau is a corrupted form of the local chief Nementou. Plaquemine, as in Bayou Plaquemine Brûlée and Plaquemines Parish, is derived from the Atakapa word pikamin, meaning "persimmon". Bayou Nezpiqué was named for an Atakapan who had a tattooed nose. Bayou Queue de Tortue was believed to have been named for Chief Celestine La Tortue of the Atakapas nation.[22] The name Calcasieu is a French transliteration of an Atakapa name: katkosh, for "eagle", and yok, "to cry".

On October 28, 2006, the Atakapa-Ishak Nation met for the first time in more than 100 years as "one nation." A total of 450 people represented Louisiana and Texas. Rachel Mouton, the mistress of ceremony and newly appointed Director of Publications and Communications, introduced Billy LaChapelle, who opened the afternoon with a traditional prayer in English and in Atakapa.[23]

The city of Lafayette, Louisiana is planning a series of trails, funded by the Federal Highway Administration, to be called the "Atakapa-Ishak Trail". It will consist of a bike trail connecting downtown areas along the bayous Vermilion and Teche, which are now accessible only by foot or boat.[24][25]

The Atakapa language is a language isolate, once spoken along the Louisiana and East Texas coast.[26] John R. Swanton proposed a Tunican language family that would include Atakapa, Tunica, and Chitimacha, which Mary Haas later expanded into the Gulf language family with the addition of the Muskogean languages. These proposed families have not been proven.[27]