Killer whales (or orcas) are powerful predators capable of dispatching prey much larger than humans, such as leopard seals and great white sharks. They have also been recorded preying on usually terrestrial species such as moose swimming between islands.[1] However, wild orcas are not considered a real threat to humans, as there are few documented cases of wild orcas attacking people, and none of the recorded attacks have been fatal. There have been about two dozen cases of orcas attacking humans since the 1970s,[2] almost exclusively perpetrated by captive animals. Experts are divided as to whether the injuries and deaths caused by captive killer whales have been accidents or deliberate attempts to cause harm.[3]

There are few recorded cases of wild orcas threatening humans; none of these have been fatal.[4][5] 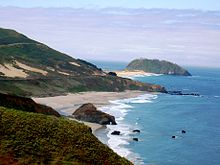 Point Sur, seen from the north on Highway 1

In 2004 a video purporting to show a Korean in a kayak being capsized by a jumping orca and surviving circulated the Internet; however according to folklorist David Mikkelson of snopes.com, this video is a fake originally made for a commercial for an energy drink.[10]

There have been several attacks on humans by captive killer whales, with some of them being fatal. 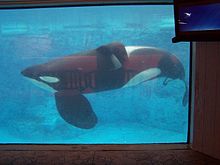 Tilikum, who has been involved in 3 deaths, swims in the Dine with Shamu exhibit in Orlando, Florida.

While Tillikum has perhaps the most infamous reputation of all captive orcas, there have been several other orcas that have harmed people whether intentionally or unintentionally on more than one occasion.[55]

Two other orcas have killed a trainer.