Isaac Newton in his Philosophiæ Naturalis Principia Mathematica demonstrated that the gravitational force between two mass points is inversely proportional to the square of the distance between the points and fully solved corresponding "two-body problem" demonstrating that radius vector between the two points would describe an ellipse. But already for the three body problem no exact closed form analytical form could be found. Instead approximate methods were developed, this is the method of "Orbital perturbation analysis". With this technique a quite accurate mathematical description of the trajectories of all the planets could be obtained. Especially critical was the mathematical modeling of the orbit of the Moon as the deviations from a pure Kepler orbit around the Earth due to the gravitational force of the Sun (i.e. one has indeed the three body problem) are much larger than deviations of the orbits of the planets from Sun-centered Kepler orbits caused by the gravitational attraction between the planets. With the availability of digital computers and the easiness to propagate orbits with numerical methods this problem partly disappeared, the motion of all celestial bodies including planets, satellites, asteroids and comets can be modeled and predicted with almost perfect accuracy using the method of the numerical propagation of the trajectories. Never-the-less several analytical closed form expressions for the effect of such additional "perturbing forces" are still very useful

All celestial bodies of the Solar System follow in first approximation a Kepler orbit around a central body. For a satellite (artificial or natural) this central body is a planet. But both due to gravitational forces caused by the Sun and other celestial bodies and due to the flattening of its planet (caused by its rotation which makes the planet slightly oblate and therefore the result of the Shell theorem not fully applicable) the satellite will follow an orbit that deviates more from a pure Kepler orbit then what is the case for the planets.

The precise modeling of the motion of the Moon has because of this been a difficult task. The best and most accurate modeling for the Moon orbit before the availability of digital computers was obtained with the complicated Delunay and Brown's lunar theories.

For man-made spacecraft orbiting the Earth at comparatively low altitudes the deviations from a Kepler orbit are much larger than for the Moon. The approximation of the gravitational force of the Earth to be that of a homogeneous sphere gets worse the closer one gets to the Earth surface and the majority of the artificial Earth satellites are in orbits that are only a few hundred kilometers over the Earth surface. Further more they are (as opposed to the Moon) significantly affected by the solar radiation pressure because of their large cross-section to mass ratio, this applies in particular to 3-axis stabilized spacecraft with large solar arrays. In addition they are significantly affected by rarefied air unless above 800–1000 km (The air drag at high altitudes strongly depending on the solar activity!)

are the components of the force per unit mass acting on the body.

and that the change of

in the time from

If now the additional force

by evaluating this integral assuming

over one orbital revolution using the true anomaly

as integration variable, i.e. as

This integral is evaluated setting

, the elliptical Kepler orbit in polar angles. For the transformation of integration variable from time to true anomaly it was used that the angular momentum

by definition of the parameter

and (1) takes the simpler form

is the orbital period

Perturbation of the semi-major axis/orbital period

is the orbital velocity

is a constant and equal to

(Equation (44) of the Kepler orbit article)

is the perturbing force and

is the velocity vector of the Kepler orbit the equation (1) takes the form:

and the new period

Perturbation of the orbital plane

make up a rectangular coordinate system in the plane of the reference Kepler orbit. If

is the argument of perigee relative the

and the approximate change

of the orbital pole

is the component of the perturbing force in the

is the distance to the center of the Earth.

is positive and in the opposite direction in the other half. The resulting change of orbit pole after one orbital revolution of duration

is the orbital velocity in the circular Kepler orbit.

Perturbation of the eccentricity vector

from which follows that

and formally there is also a derivative

corresponding to the rotation of the orbital plane

ignoring the out-of-plane force and the new eccentricity vector

computed as described above.

and consequently with a constant orbital velocity

is constant one gets that

is the polar angle of

system. Applying (2) one gets that

This means the eccentricity vector will gradually increase in the direction

The effect of the Earth flattening 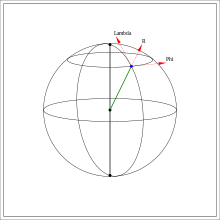 In the article Geopotential model the modeling of the gravitational field as a sum of spherical harmonics is discussed. The by far dominating term is the "J2-term". This is a "zonal term" and corresponding force is therefore completely in a longitudinal plane with one component

in the radial direction and one component

with the unit vector

orthogonal to the radial direction towards north. These directions

are illustrated in Figure 1. 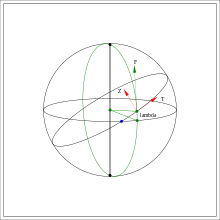 in the direction of motion and the orbital pole

. The force component Fλ is marked as "F"

must be split into two orthogonal components

as illustrated in figure 2

points in the direction north and such that

are in the equatorial plane of the Earth with

The components of the unit vectors

making up the local coordinate system (of which

are illustrated in figure 2) relative the

is the polar argument of

in the orbital plane

is the angle between the equator plane and

Secondly the projection of direction north,

, on the plane spanned by

and this projection is

is the unit vector

orthogonal to the radial direction towards north illustrated in figure 1.

Perturbation of the orbital plane

is the eccentricity and

is the argument of perigee of the reference Kepler orbit

As all integrals of type

are zero if not both

this can be written

describing a cone around

with a precession rate (radians per orbit) of

In terms of orbital elements this is expressed as

is the right ascension of the ascending node

Perturbation of the eccentricity vector

the new eccentricity vector being the projection of

on the new orbital plane orthogonal to

are the components of the eccentricity vector in the

coordinate system this integral (25) can be evaluated analytically, the result is

This the difference equation of motion for the eccentricity vector

to form a circle, the magnitude of the eccentricity

caused by the in-plane force components and a contribution

caused by the use of the ascending node as reference

This is illustrated in figure 3:

To the change in argument of the eccentricity vector

One therefore gets that

In terms of the components of the eccentricity vector

Proof that the integral

Integrating the first term of the integrand one gets:

For the second term one gets:

For the third term one gets:

For the fourth term one gets: