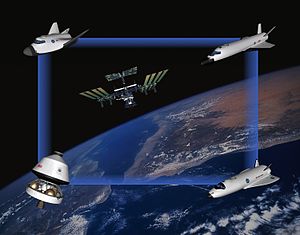 The Orbital Space Plane (OSP) program was a NASA concept[when?] designed to support the International Space Station requirements for crew rescue, crew transport and contingency cargo such as supplies, food and other needed equipment. No operable spacecraft was ever built.

With the initiation of the Constellation program in 2004, NASA transferred the knowledge gained on the OSP to the development of Crew Exploration Vehicle,[1] an Apollo-style capsule with separate crew and service modules.

The initial plans for the International Space Station envisaged a small, low-cost 'Assured Crew Return Vehicle' (ACRV) which would provide emergency evacuation capability; the X-38 was the prototype of this.[2] Following cancellation of the ACRV in 2002, the program led to the more capable Orbital Space Plane concept.[citation needed]

The first variant of the Orbital Space Plane was designed to serve as a crew rescue vehicle for the ISS; this replaced the previous plans for a dedicated station Crew Return Vehicle, which had been sidelined by budget cuts.[citation needed]

This early version of the plane had been expected to enter service by 2010.[3]

Future versions of the Orbital Space Plane would have been launched on an existing EELV rocket to carry crews to the International Space Station. It was envisaged that the OSP would operate alongside the Space Shuttle with the OSP responsible for crew flights and the shuttle handling construction and cargo flights. At the time, the shuttle program was not yet set for retirement and was thought to be technically viable up until the 2030s. Thus it was expected that the two spacecraft would complement each other throughout the lifespan of the ISS. One advantage of this approach would have been assured manned access to space; the lack of this capability was to be highlighted starkly with the loss of Space Shuttle Columbia.[citation needed]

Top level requirements for the Orbital Space Plane and its related systems were approved in February 2003.[4] In March 2003, the program began evaluating system operations to ensure the alignment of systems design between the NASA mission and the contractor design.[citation needed]

Transfer to the CEV program

The Crew Exploration Vehicle program was based on four groups of concepts considered for the physical design of the space plane itself — or the vehicle architecture: a capsule, a lifting body, a sharp body with wings and a blunt body with wings (see image).[citation needed]

After the Columbia accident investigation, the capsule design with a separate escape system was considered the optimal design for crew safety.[citation needed]

Other components of the OSP program were the X-37 and the DART.[5]

The X-37 vehicle was designed to flight test advancing technologies to reduce the risk of future reusable launch vehicle systems, including the Orbital Space Plane.[citation needed]

The Demonstration for Autonomous Rendezvous Technology or DART, was another flight demonstrator vehicle designed to test technologies required to locate and rendezvous with other spacecraft. Although Russia has mastered this technology for years, this is the first for NASA. Using onboard guidance sensors, DART would have performed a series of maneuvers around a retired satellite. However, after a successful launch, unknown problems with the guidance system caused the vehicle to run out of thruster fuel prematurely, ending the mission before all objectives could be carried out.[citation needed]

In 2010, Orbital Sciences Corporation reused some work done under OSP program contracts for its Prometheus spacecraft proposal to NASA under phase 2 of the Commercial Crew Development program.[6]