Orbital Replacement Units (ORUs) are key elements of the International Space Station that can be readily replaced when the unit either passes its design life or fails. Examples of ORUs are: pumps, storage tanks, controller boxes, antennas, and battery units. Such units are replaced either by astronauts during EVA or by the SPDM Arm. All are stored on the three External Stowage Platforms (ESPs) or the four ExPRESS Logistics Carriers (ELCs) mounted on the Integrated Truss Structure (ITS).

Location of ESPs and ELCs on the International Space Station. 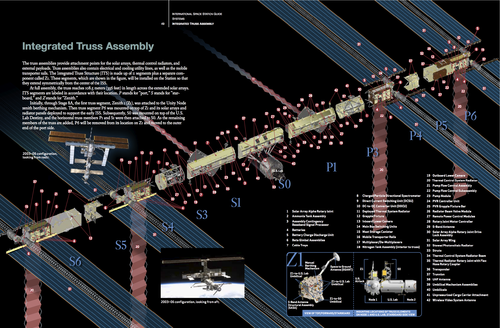 While spare parts/ORUs were routinely brought up and down during the ISS life-time via Space Shuttle resupply missions, there was a heavy emphasis once the Station was considered complete.

Several Shuttle missions were dedicated to the delivery of ORUs using support carrier structures/pallets of which some remained in the cargo bay, some that were deployed and retrieved and other pallets that were designed to be removed from the payload bay by RMS and placed onto the station.

Other modes of ORU delivery included:

Payload bay sidewall mounted ORUs, such as BCDUs, were regularly carried and transported to the ISS via EVAs.

Also, three flights of the Integrated Cargo Carrier (ICC) which remained in the cargo bay on flights STS-102, STS-105 and STS-121; one use of the ICC-Lite on STS-122 (a shortened version of the ICC); two uses of the ICC-Vertical Light Deployable on STS-127 as ICC-VLD and STS-132 as ICC-VLD2, which were deployed and retrieved during the mission; and five uses of the Lightweight MPESS Carrier (LMC) on STS-114, STS-126, STS-128, STS-131 and STS-135, the LMC was not designed to be deployed and remained in the shuttle payload bay throughout the flight.

To date other than the Space Shuttle missions, only one other mode of transportation of ORUs was utilised by the station, the Japanese cargo vessel HTV-2 delivered an FHRC and CTC-4 via its Exposed Pallet (EP).[7]

Modes of ORU Transport to the ISS

Orbital replacement units are parts of the main systems and subsystems of the external elements of the ISS. Affecting the control of the cooling system, the movement and control of the solar arrays and SARJ as well as the flow of power throughout the station from solar arrays to the heat rejection system as part of the External Active Thermal Control System (EATCS). As well as storage tanks for oxygen as part of the station Environmental Control and Life Support System (ECLSS). ORUs, can be hardware such as radiators, or simply batteries or communication antennas. Essentially any element that can readily be removed and replaced when required.

The replaceable modular nature of the station allows its life to be extended well beyond its initial design life, theoretically.

(Weight, description and current location of the spare on the station)

The TUS reel assembly (TUS-RA) is basically a large spool much like a garden hose reel that pays out cable when the MT moves away and rolls it back up as the MT returns to the center of the truss. This is the same TUS-RA retrieved during STS-121. It was replaced and this failed unit was returned to earth and refurbished to later fly on ELC-2.

The SSRMS has two identical grapple end points called LEE that enable it to reattach either end to the station as its new base.

The LDU provides drive and stopping forces for the mobile transporter along the integrated truss structure rail.

The plasma contactor unit (PCU) is used to disperse the electrical charge that builds up by providing an electrically conductive “ground path” to the plasma environment surrounding the ISS. This prevents the electrical discharges and provides a means of controlling crew shock hazard during EVA. There are two PCUs located on the ISS Zenith 1 Truss, both of which are operated during EVA.

Each external loop contains a pump and flow control system (PFCS) which contains most of the controls and mechanical systems that drive the EEATCS. There are 2 pumps per PFCS which circulate ammonia throughout the external coolant loops

The UTA is a processor that allows power, signals and data to flow across the SARJ by roll rings incorporated within.