Lit in the afternoons by an apricot light that may have inspired its Spanish name Oracabeza, or "Golden Head", it is a friendly town with a covered produce market and a few shops and bars. The main street is a pleasant and graceful promenade with a number of well-maintained buildings in the early 20th century Jamaican vernacular tradition.[2]

To the east Oracabessa merges into a residential community which is the site of luxury villas such as Goldeneye, Golden Clouds and Firefly Estate, once the home of Noël Coward. To the immediate west of Oracabessa is the village of Boscobel, home of Ian Fleming International Airport, Jamaica's newest international airport.[3]

One of Oracabessa's most well-known residents is artist Richard Von White, grandson of W.E. White a self-made man, baker, planter and Oracabessa's leading citizen in the early 1900s. Von's brilliantly hued, evocative canvasses reflect the tropical flora that is the source of his inspiration.[4] Other notable residents of Oracabessa include legendary music producer Chris Blackwell and bestselling author Colin Simpson. Blackwell owns Goldeneye villa, original home of author Ian Fleming, who wrote many of the James Bond novels while living in Oracabessa. Simpson owns Golden Clouds villa and is the great-great grandson [5] of renowned slavery abolitionist James Phillippo.

The history of Oracabessa dates back over 500 years to the year 1502 when Christopher Columbus sailed into Oracabessa Bay, and bestowed the name Santa Maria island on the idyllic island located in what is now Goldeneye estate. At the time, the area was populated by a small number of Taino and Arawak Indians and the Spanish established a small supply post named Oracabeza, or "Golden Head" for the magnificent sunsets viewed from the cliffs of the colony. Oracabessa remained a Spanish settlement until 1655, when the British captured the North Coast of the island. [6] 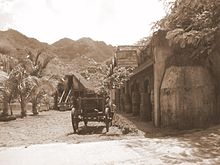 For the next 200 years, Oracabessa functioned as a tiny agricultural community with its main crop, bananas, controlled by a small group of British landowners. The arrival of Reverend James Phillippo in 1834 changed the course of Oracabessa's history. Phillippo built the first church in Oracabessa and led a defiant protest against the local landowner's refusal to sell land to former slaves. The parish of St. Mary, where Oracabessa is located, had a large population of freedom fighters, known as Jamaican Maroons, who worked closely with Phillippo in his quest for justice. With this show of force, combined with a decree from the British Government, the landowner's relented and sold Phillippo enough land to build houses, schools, churches and businesses for the hundreds of residents in the area. [7]

Reverend Phillippo was a pioneer of Free Villages, which were settlements that functioned largely without influence from the colonial government. As part of this unique social experiment, Phillippo purchased land from plantation owners and resold the land to the former slaves with terms that required them to only repay what they could afford. Within 3 years, he had received full payment and the residents of Oracabessa owned their land and businesses outright. Phillippo's belief and faith in the people of Oracabessa led to the development of other Free Villages throughout the island.

Phillippo successfully demonstrated that the Free Village concept worked and that it represented a great opportunity for a community to be self-sufficient. The Oracabessa farmer's market, which is still there today, was the first such market in Jamaica to be owned and operated by former slaves. Within a few years, an entire socio-economic system had come to life and a vibrant fishing and agricultural community was born. Without the large land barons who ran almost the entire island, Oracabessa, and the parish of St. Mary, were largely left to fend for themselves. A series of devastating hurricanes and floods at the end of the 19th century brought an end to Oracabessa's brief success as an independent, self-sufficient community. [8]

In 1910, Ruth Bryan Owen, the daughter of one of the richest men in the U.S., had read the story of Reverend James Phillippo and his grand experiment in Oracabessa, and decided that she wanted to continue his work. She convinced her husband [9], who was a senior British Military officer, to accept a posting in Jamaica which would allow them to move to Oracabessa, where he would oversee the construction of new roads and schools and she would help rebuild the local economy. Owen encouraged local residents to develop their skills as artisans and cultivated a community of painters and carvers. Her social standing and wealthy friends in the U.S. enabled her to ship the artwork to various galleries and provide a sustainable living for this artistic community. [10] 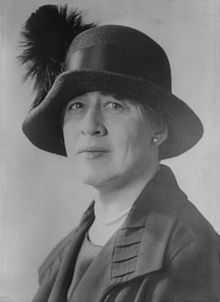 In addition to her philanthropic work in Oracabessa, Owen also built a magnificent home, Golden Clouds, which still stands today. She had many influential friends in politics and entertainment, who visited her regularly in Oracabessa. One such visitor was Charlie Chaplin, who was her guest at Golden Clouds. [11] Owen eventually left Oracabessa for a life in politics, and achieved international fame by becoming the first female U.S. Ambassador in history. But, she held on to Golden Clouds and returned faithfully every winter to Oracabessa for the next 30 years.

In 1946, Ian Fleming became the next famous resident of Oracabessa.[12] Fleming purchased the land next door to Golden Clouds and built his house, Goldeneye, where he proceeded to write all of the James Bond novels and earned worldwide acclaim. Fleming's coterie of friends included actors, musicians and filmmakers, [13] who were enamoured with Oracabessa's main street, beautiful beach and its quiet, unassuming local population. [14] In 1976, 12 years after Ian Fleming's death, Goldeneye was sold to reggae star Bob Marley. Shortly before his own death, Bob Marley sold the estate to Island Records founder Chris Blackwell. [15] 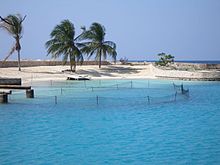 In the mid-1990s, the Island Outpost corporation owned by Chris Blackwell bought seventy acres of prime coastal land and opened the village's main attraction, the James Bond Beach Club. Located just off Main Street along Old Wharf Road, this pretty strip of white sand has brightly painted changing rooms, a water sports centre, a bar and a restaurant. Its expansive lawns are a regular venue for concerts by local and international artists.[16] Scenes from the classic James Bond movie Dr. No, which features a young and beautiful Ursala Andress were filmed in and around the area, most notably when Honey Ryder [Andress] emerges from the sea at Laughing Waters further up the coast and at Dunn's River Falls.[17]

In the 21st century, Oracabessa has again become known as an artist community with studios operated by musicians, painters, and carvers.[18] Art galleries in Oracabessa include Von White's studio, and the Wilderness House of Art.[19] Oracabessa has a wide range of musicians who live, record, and perform in the area. The music group UB40 has a studio in Oracabessa,[20] and large reggae concerts are presented at James Bond Beach with artists such as Rihanna, Ziggy Marley and Lauryn Hill performing.[21][22]

Several scenes from the 1962 James Bond film Dr. No which featured Sean Connery as Bond, and Ursala Andress in her Golden Globe-winning role as Honey Ryder were filmed at James Bond Beach.

In the 1973 film, Live and Let Die, James Bond and his guide, Quarrel, drive through Oracabessa and stop at the triangular intersection in the main square to ask for directions.[23]

Interior and exterior scenes for the 1989 film, The Mighty Quinn, starring Denzel Washington were filmed at Golden Clouds villa in Oracabessa.[25]

Sting wrote the song "Every Breath You Take" while on vacation in Oracabessa.[26][27]