It was reported from Nuevo León, Mexico, according to D. Weniger in 1970[6] .The species name "Aciculata" derives from many sources: the Latin word “acicula” which means “a small pin for a headdress”, and the adjectival suffix for nouns "atus" , meaning possessive of or likeness to something (with, shaped, made), while for verb participles it means a completed action. 'Chenille Prickly Pear', one of its vernacular names, comes for the fringe of spines around the edge of the pad.[7]. The specific name also means "covered with small pins"[8]. 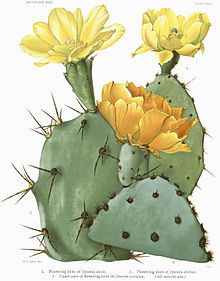 An illustration of the species.

The stems have segments partly rounded at apex. They are faded and dull grey-green more or less glaucous[8] . They measure 10-20 cm in length. The leaves are acicular and ephemeral. The aeroles are often spineless and there is symmetrical regularity of them on the body[9] . They are large, widely separated.It has numerous glochids or micro-spines, 3-12 mm long, acicular, slender, spreading, forming a dense cluster. They're normally golden yellow to dark red in colour. It has often no spines, rarely 1-3 which are reflexed. They are of a yellowish or toasted colour with a brownish base, up to 3 centimetres in length[8]. They are often folded and seemingly deciduous. It has broad, point-tipped blossoms colored golden yellow, orange or red and of diameter 8-10 cm. Several sources report the flowers as being yellow in colour. But the plants in cultivation usually have bright red-orange flowers, and sometimes the centre is greenish. Petals are broad-rounded or retuse, filaments are yellowish and the stigma dull yellowish with 8-10 green lobes. They mostly flower in early summer or spring. The plant's fruits are usually pear-shaped, covered with fine spines and glochids, and purple[6].

It grows in dry hills mainly on stony outcrops, often in small colonies usually to the exclusion of other plants. This species has been reported to be found in Chandler (Arizona), Hereford (Arizona), Phoenix (Arizona) , Tucson (Arizona), San Diego (California), Spring Valley (California) and Molino (Florida)[4]. It is widespread in south of North America, rear to the Isthmus of Panama.[10] [11]. However, it is actually native to Chihuahuan Desert (Texas) and North Mexico[7].[12].

Like its other cactus relatives, this deciduous and succulent species also has it leaves reduced to spines in order to check excess transpiration, which helps it to survive by conserving water in the hot climate of Texas, in southwestern United States, and North Mexico. This adaptation also helps in defending itself from being consumed by any herbivores there[13] . It has the special ability to propagate from woody or softwood stem cuttings [4]. It can even propagate by cuttings of leaf pads at any time in the growing season, allowing to cut surface to callus over before planting. This cactus can survive healthily and produce good many flowers only if it is fully exposed to the sun. They can also tolerate much cold like temperatures from -5° to -12° C [8].

The fruits are edible and the soft joints can be cooked as vegetables. It also has an ability to treat dyspepsia, mumps, swelling and in veterinary it is used to treat bruises. After burning of spines the joints can serve as a good food for cattle[8].