The Optical window [1] (also known as therapeutic window) defines the range of wavelengths where light has its maximum depth of penetration in tissue. Within the NIR window, scattering is the most dominant light-tissue interaction, and therefore the propagating light becomes diffuse rapidly. Since scattering increases the distance travelled by photons within tissue, the probability of photon absorption also increases. Because scattering has weak dependence on wavelength, the optical window is primarily limited by absorption, due to either blood at short wavelengths or water at long wavelengths.

) is defined as the probability of photon absorption in tissue per unit path length [2]. Different tissue components have different

is a function of wavelength. Below are discussed the absorption properties of the most important chromophores in tissue. Also, molar extinction coefficient (

) is another parameter that is often used to describe photon absorption in tissue. By multiplying e by the molar concentration and by ln(10), one can convert

Figure 1: The molar extinction coefficients of HbO2 and Hb [3].

) is bound to oxygen, while deoxyhemoglobin (

) is unbound to oxygen. These two different types of hemoglobin exhibit different absorption spectra that are normally represented in terms of molar extinction coefficients, as shown in Figure 1. The molar extinction coefficient of Hb has its highest absorption peak at 420 nm and a second peak at 580 nm. Its spectrum then gradually decreases as light wavelength increases. On the other hand,

absorption decays much faster than Hb absorption. The points where the molar extinction coefficient spectra of

By using two different wavelengths, it is possible to calculate the concentrations of oxyhemoglobin (

) as shown in the following equations:

Figure 2: The absorption spectrum of water [4].

are the two wavelengths;

are the molar extinction coefficients of

are the molar concentrations of

) can then be computed as

Water: Although water is nearly transparent in the range of visible light, it becomes absorbing over the near-infrared region. Water is a critical component since its concentration is high in human tissue. The absorption spectrum of water in the range from 250 to 1000 nm is shown in Figure 2.

Other tissue components with less significant contributions to the total absorption spectrum of tissue are melanin and fat. 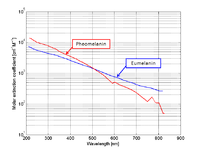 Figure 3: The molar extinction coefficients of eumelanin and pheomelanin [5].

Melanin: Melanin is a chromophore that exists in the human epidermal layer of skin responsible for protection from harmful UV radiation. When melanocytes are stimulated by solar radiation, melanin is produced[6]. Melanin is one of the major absorbers of light in some biological tissue (although its contribution is smaller than other components). There are two types of melanin: eumelanin which is black-brown and pheomelanin which is red-yellow[7]. The molar extinction coefficient spectra corresponding to both types are shown in Figure 3.

Figure 4: The absorption coefficient spectrum of oil from pig lard [8].

Fat: Fat is one of the major components in tissue that can comprise 10-40% of tissue. Although not many mammalian fat spectra are available, Figure 4 shows an example extracted from [8]. This plot was obtained from clear purified oil from pig lard. The detailed purification process is explained in [8].

Optical scattering occurs due to mismatches in refractive index of the different tissue components, ranging from cell membranes to whole cells. Cell nuclei and mitochondria are the most important scatterers [2]. Their dimensions range from 100 nm to 6 μm. Most of these organelles exhibit highly forward-directed scattering [6].

Light scattering in biological tissue is denoted by the scattering coefficient (μs), which is defined as the probability of photon scattering in tissue per unit path length [2].

), which is defined as

is the transport scattering coefficient defined as

[9]. The effective attenuation coefficient is the dominant factor for determining light attenuation at depth

Estimation of the optical window in tissue 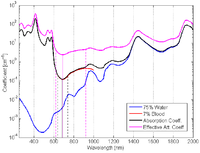 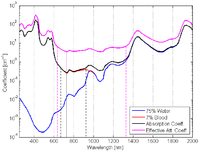 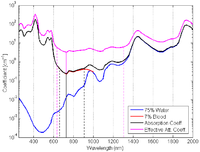 Absorption spectrum for arteries: In this case

≈ 98% (arterial oxygen saturation). Then oxyhemoglobin will be dominant in the total absorption (black) and the effective attenuation (magenta) coefficient spectra, as shown in Figure 6 (a).

Absorption spectrum for veins: In this case

≈ 60% (venous oxygen saturation). Then oxyhemoglobin and deoxyhemoglobin will have similar contributions to the total absorption (black) and the effective attenuation (magenta) coefficient spectra, as shown in Figure 6 (b).

The total absorption (black) and the effective attenuation (magenta) coefficient spectra for breast tissue is shown in Figure 6 (c).In addition, the effective penetration depth is plotted in Figure 7.