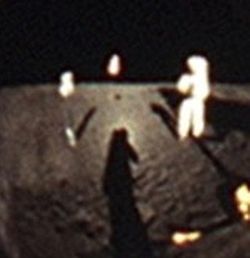 The opposition effect brightens the area around Buzz Aldrin's shadow due to retroreflective properties of lunar regolith.

The opposition surge (sometimes known as the opposition effect, opposition spike or Seeliger effect[1]) is the brightening of a rough surface, or an object with many particles, when illuminated from directly behind the observer. The term is most widely used in astronomy, where generally it refers to the sudden noticeable increase in the brightness of a celestial body such as a planet, moon, or comet as its phase angle of observation approaches zero. It is so named because the reflected light from the Moon and Mars appear significantly brighter than predicted when at astronomical opposition. Two physical mechanisms have been proposed for this observational phenomenon: shadow hiding and coherent backscatter.

The phase angle is defined as the angle between the observer, the observed object and the source of light. In the case of the solar system, the light source is the Sun, and the observer is situated on Earth.

As the phase angle of an object lit by the sun decreases, the object's brightness rapidly increases. This is mainly due to the increased area lit, but is also partly due to the intrinsic brightness of the part that is sunlit. This is affected by such factors as the angle at which light reflected from the object is observed. For this reason, a full moon is more than twice as bright as the moon at first or third quarter, even though the visible area illuminated appears to be exactly twice as large.

When the angle of reflection is close to the angle at which the light's rays hit the surface (that is, when the sun and the object are close to opposition from the viewpoint of the observer), this intrinsic brightness is usually close to its maximum. At a phase angle of zero degrees, these shadow areas become negligible. The celestial body in effect becomes an imperfect mirror. When phase angles approach zero, there is a sudden increase in apparent brightness, and this sudden increase is referred to as the opposition surge.

The effect is particularly pronounced on regolith surfaces of airless bodies in the solar system. The usual major cause of the effect is that a surface's small pores and pits that would otherwise be in shadow at other incidence angles become lit up when the observer is almost in the same line as the source of illumination. The effect is usually only visible for a very small range of phase angles near zero. For bodies whose reflectance properties have been quantitatively studied, details of the opposition effect — its strength and angular extent — are described by two of the Hapke parameters. In the case of planetary rings (such as Saturn's), an opposition surge is due to the covering of shadows on the ring particles. This explanation was first proposed by Hugo von Seeliger in 1887.[2]

An alternate theory for the increase in brightness during opposition is that of coherent backscatter.[3] In the case of coherent backscatter, the reflected light is enhanced at narrow angles if the size of the scatterers in the surface of the body is comparable to the wavelength of light and the distance between scattering particles is greater than a wavelength. The increase in brightness is due to the reflected light combining coherently.

Coherent backscatter phenomena have also been observed with RADAR. In particular, recent observations of Titan at 2.2 cm with Cassini have shown that a strong coherent backscatter effect is required to explain the high albedos at radar wavelengths. [4]

Opposition surge throughout the Solar system

The existence of the opposition surge was first recorded in 1956 by Tom Gehrels during his study of the reflected light from an asteroid.[5] Gehrels' later studies showed that the same effect could be shown in the moon's brightness.[6] He coined the term "opposition effect" for the phenomenon, but the more intuitive "opposition surge" is now more widely used.

Since Gehrels' early studies, an opposition surge has been noted for most airless solar system bodies. No such surge has been reported for gas giant, nor for bodies with pronounced atmospheres.

In the case of the Moon, B. J. Buratti et al. have suggested that its brightness increases by some 40% between a phase angle of 4° and one of 0°, and that this increase is greater for the rougher-surfaced highland areas than for the relatively smooth maria. As for the principal mechanism of the phenomenon, measurements indicate that the opposition effect exhibits only a small wavelength dependence: the surge is 3-4% larger at 0.41 μm than at 1.00 μm. This result suggests that the principal cause of the lunar opposition surge is shadow-hiding rather than coherent backscatter.[7]