Opioid dependency is a medical diagnosis characterized by an individual's inability to stop using opioids (morphine/heroin, codeine, oxycodone, hydrocodone, etc.) even when objectively it is in his or her best interest to do so. In 1964 the WHO Expert Committee on Drug Dependence introduced "dependence" as “A cluster of physiological, behavioural and cognitive phenomena of variable intensity, in which the use of a psychoactive drug (or drugs) takes on a high priority. The necessary descriptive characteristics are preoccupation with a desire to obtain and take the drug and persistent drug-seeking behaviour. Determinants and problematic consequences of drug dependence may be biological, psychological or social, and usually interact”. The core concept of the WHO definition of “drug dependence” requires the presence of a strong desire or a sense of compulsion to take the drug; and the WHO and DSM-IV-TR clinical guidelines for a definite diagnosis of “dependence” require that three or more of the following six characteristic features be experienced or exhibited:

The Walid-Robinson Opioid-Dependence (WROD) Questionnaire was designed based on these guidelines. According to position papers on the treatment of opoid dependence published by the United Nations Office on Drugs and Crime and the World Health Organization, care providers should not mistake opioid dependence for a weakness of character or will.[1] Accordingly, detoxification alone does not constitute adequate treatment.

Studies show that most opioid dependent patients suffer from at least one severe psychiatric comorbidity.[2] Since opioids used in pain therapy rarely cause any of these conditions, they are assumed to have existed prior to the development of dependence. Opioids are known to have strong antidepressive, anxiolytic and antipsychotic effects and thus opioid dependence often develops as a result of self medication. 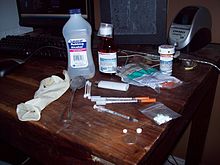 Furthermore some studies suggest a permanent dysregulation of the endogenous opioid receptor system after chronic exposure to opiates. A recent study has shown that an increase in BDNF, brain-derived neurotrophic factor, in the ventral tegmental area (VTA) in rats can cause opiate-naive rats to begin displaying opiate-dependent behavior, including withdrawal and drug-seeking behavior.[3] It has been shown that when an opiate-naive person begins using opiates at levels inducing euphoria, this same increase in BDNF occurs.[4]

Another recent study concluded to have shown "a direct link between morphine abstinence and depressive-like symptoms" and postulates "that serotonin dysfunction represents a main mechanism contributing to mood disorders in opiate abstinence".[5]

Symptoms of withdrawal from opiates include, but are not limited to,

Depending on the quantity, type, frequency, and duration of opioid use, the physical withdrawal symptoms last for as little as forty-eight to seventy-two hours (for short-acting opioids such as hydromorphone [Dilaudid] and oxycodone after short duration lower-dose use), and as long as thirty to sixty days for long-acting opioids such as buprenorphine and methadone, respectively, after extended high-dose use. When long acting opioids like methadone (Methadose, Physeptone) or buprenorphine (Suboxone [buprenorphine in a 4:1 ratio to naloxone] and Subutex [single-agent buprenorphine]) are used for an extended period, physical withdrawal symptoms can last up to six weeks. This initial withdrawal is characterized by the body regaining physical homeostasis.

Opioid dependence is a complex health condition that often requires long-term treatment and care. The treatment of opioid dependence is important to reduce its health and social consequences and to improve the well-being and social functioning of people affected. The main objectives of treating and rehabilitating persons with opioid dependence are to reduce dependence on illicit drugs; to reduce the morbidity and mortality caused by the use of illicit opioids, or associated with their use, such as infectious diseases; to improve physical and psychological health; to reduce criminal behaviour; to facilitate reintegration into the workforce and education system and to improve social functioning. The ultimate achievement of a drug free state is the ideal and ultimate objective but this is unfortunately not feasible for all individuals with opioid dependence, especially in the short term.

As no single treatment is effective for all individuals with opioid dependence, diverse treatment options are needed, including psychosocial approaches and pharmacological treatment.

Buprenorphine sublingual preparations are often used in the management of opioid dependence (that is, dependence on heroin, oxycodone, hydrocodone, morphine, oxymorphone, fentanyl or other opioids). The Suboxone and Subutex preparations were approved for this indication by the United States Food and Drug Administration in October 2002. This was only possible due to the Drug Addiction Treatment Act of 2000 which overturned a series of 1914–1920 Supreme Court rulings that had found that maintenance and detox treatments were not a form of medical treatment.[citation needed] Although the rulings had the power of legal precedent prior to 2000, it is likely that they were not the intended interpretation of the laws passed originally by congress.[citation needed]

In Switzerland, Germany, the Netherlands, and the United Kingdom, longterm injecting drug users that do not benefit from methadone and other medication options are being treated with pure injectable diamorphine that is administered twice daily under the supervision of medical staff. For this group of patients, diamorphine treatment has proven superior in improving their social and health situation.[9] Studies show that even after years of homelessness and delinquency and despite severe comorbidities, about half of the patients find employment within the first year of treatment.[10]