Three of the SEALs were killed during the initial operation, as were other American Special Operations soldiers (SEALs and Night Stalker pilots) whose helicopter was shot down while flying to provide support and rescue to the team.[4]

Marcus Luttrell, the only surviving American SEAL, was protected by an elderly Afghan farmer who sent an emissary to the closest military base allowing a rescue team to locate the wounded SEAL. It was considered the worst loss of life in the Afghanistan campaign until the 2011 Chinook shootdown in Afghanistan. 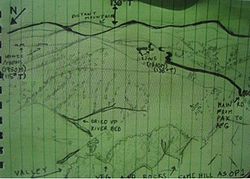 The map given to the Navy SEALs detailing their mission.

On June 28, 2005, a four-man group from SEAL Team 10, led by LT Michael P. Murphy and consisting of petty officers Matthew Axelson, Danny Dietz and Marcus Luttrell, were on a mission to kill or capture Ahmad Shah, a Taliban leader who commanded a group of insurgents known as the "Mountain Tigers,"[5] west of Asadabad.[6][7]

The team was inserted at night via MH-47 Chinook helicopter several miles from the village where Ahmad Shah was suspected to be operating. The team had been tracking Shah for several months and had actually called off Operation Red Wing twice before when it was discovered Shah had moved locations at the last minute. Reviewing the pre-mission maps and photographs of the area, Luttrell stated that the team was very concerned about the lack of adequate cover in the area surrounding the village. This would make it difficult for the team to stay concealed. Their mission would be to surveil the village, make a positive identification of Shah, and then capture or kill him. If the enemy force was too great, they were prepared to call in a direct action force to assault the village.[1]

The team, under cover of darkness and pouring rain, immediately moved to a preplanned observation point above the village to wait for daylight. Once dawn arrived, they realized their observation point was less than ideal due to a bad angle on the village and a fog bank obscuring their view. LT Murphy and Petty Officer Axelson scouted a new position and moved the team there just after daylight. This new observation post offered a better view of the village, but only one possible escape route, should they be discovered.[1]

As the morning wore on, a local goat herder and his son stumbled upon the SEALs' hiding place. Unable to verify any hostile intent from the herders,[8] Dietz attempted to contact HQ via radio, but was unable to get an answer from anyone. Absent any higher-level guidance, LT Murphy put the decision as to what should be done with them up for a vote: Axelson voted to kill the Afghans, stating, "The military decision is obvious," in reference to the near-certainty that the herders would alert the Taliban. Dietz abstained, and Murphy allowed Luttrell the deciding vote, but warned him that the killings would have to be reported, and that they would be attacked by the "US liberal media" and would almost certainly face murder charges. Luttrell voted to release the herders. He would later state, "It was the stupidest, most southern-fried, lame brained decision I ever made in my life. I must have been out of my mind. I had actually cast a vote which I knew could sign our death warrant. I’d turned into a f—ing liberal, a half-assed, no-logic nitwit, all heart, no brain, and the judgment of a jackrabbit."[6] In discussing the option of tying them up and leaving them, Luttrell stated that the team had no rope or other means of securing them and that the presence of the herders' goats was threatening to give away their position. Taking the herders with them to a pick up point was also untenable given their need to move with stealth in that area, made worse by the fact that the goats followed the herders wherever they went. This would certainly expose their presence in the area and possibly lead to a Taliban attack.[1]

After letting the goatherds go, the team moved to their first observation point so as to throw off anyone attempting to intercept them at their old location. Here, Dietz continued attempts to reach HQ via radio for immediate extraction, but was continually unsuccessful. Approximately an hour after the goatherds disappeared over the mountain ridge, the SEALs were confronted by a force of Afghan fighters, estimated between 150-200 strong, causing Luttrell to believe that the released herders had given away their position. The large variant in the number of opposing Taliban is due to differing accounts of the size of the enemy force. The team had been told that as many as 200 fighters could be protecting Shah, and according to Luttrell, the SEALs killed a significant number of enemy fighters during the subsequent engagement, however their numbers never seemed to diminish. This led Luttrell to believe they were receiving almost constant reinforcements.[1][9][10]

The insurgents set up a "well organized, three-sided attack", which forced the SEALs to begin running down the slope of the mountain, all of them receiving injuries during the descent, either by gunfire and/or the fall. Even before reaching a new defensive position behind some felled logs, Murphy had already been shot in the abdomen, Luttrell had received a spinal injury, and Dietz's thumb had been blown off. Nevertheless, they all continued fighting, attempting to attrite the Taliban forces enough to cause them to retreat.[1] [5][11] After 45 minutes of fighting, Murphy moved into the open, after noting the team's radio transmitters weren't functioning properly in the mountains, and placed the emergency call for support from his cell phone. He was shot in the back during the conversation.[5][10] Nevertheless he returned to his cover after the call and continued to battle.

After two hours of fighting, only Luttrell remained alive, the other members of his team succumbing to multiple gunshot wounds. Eventually he was blown off the mountain ridge by a rocket-propelled grenade, knocking him unconscious.[5][11] 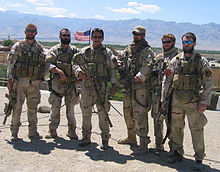 Taliban video of captured American equipment being examined after the battle

Two MH-47D helicopters, four UH-60 Black Hawk and two AH-64D Longbows attempted to come to their rescue to provide extraction in the mountains of Kunar. One of the MH-47 helicopters, carrying eight Navy SEALs and eight 160th Night Stalkers, was shot down by a rocket propelled grenade shot through the open rear ramp, causing the pilot to lose control of the craft. It hit a mountain ledge, and then fell to the bottom of a ravine, killing all sixteen on board[12]. It was the deadliest day for the U.S. Naval Special Warfare Command until the August 5, 2011 helicopter crash that killed 30 American soldiers, 17 of which were Navy SEALs and 5 of which were Naval Special Warfare Command support personnel[13].

Shah, the original target of the SEAL team, later gave an interview where he claimed that his forces had set a trap for the American forces, "We certainly know that when the American army comes under pressure and they get hit, they will try to help their friends. It is the law of the battlefield."[14]

The only survivor of the attack, Luttrell tried to hide himself as he waited for rescue from the search helicopters flying overhead. He stayed well hidden in a cleft of rock while the Taliban continued searching for him throughout the remainder of the day. He could hear enemy fighters close by, firing aimlessly into the underbrush, trying to drive him out, but they were never able to discover his location. AH-64 Apache and UH-60 Blackhawk helicopters were flying through the valley almost all afternoon, and Luttrell attempted contact via his rescue radio. Due to dehydration and his mouth being filled with dust, he was unable to speak. He activated his emergency locator beacon, but without verbal confirmation of his identity, the pilots assumed the Taliban had captured a radio and were attempting to lure another helicopter in order to shoot it down. Before night fell, Luttrell killed three Taliban lookouts, with his silenced Mk 12 Special Purpose Rifle, that were searching an adjacent ridge approximately 150 yards away.

As night approached, driven by thirst, shot in the leg and with three cracked vertabrae,[5] Luttrell traversed 7 miles over the remainder of the night and following day.[1] He remained unnoticed until, falling from a ledge, he was discovered by an Afghan shepherd named Sarawa,[15] who summoned his companions to help carry the wounded Luttrell to the village of Sabray-Minah.[1][11] The villagers took care of Luttrell, providing food and medical attention, and protecting him from the Taliban that came to the village demanding that he be turned over to them. The Taliban offered bounties for turning him over and threatened the villages inhabitants with violence if they did not comply. According to Pashtun custom, the villagers were honor-bound to protect someone they had taken in, and the entire village participated in guarding him. He was moved between houses several times and received medical attention from the village's physician.

Meanwhile, nearly two days after the initial confrontation, the military had 300 men searching for the team,[16] and had located the downed helicopter and verified that all 16 aboard had been killed.[12] A spokesman for the Taliban, Mofti Latifollah Hakimi, confirmed that the helicopter had been shot down by insurgent fire, and promised to deliver the video made during the assault to media outlets.[17]

Despite multiple attempts, the search helicopters were unable to locate the wounded Navy SEAL. On July 2,[5] the village elder, carrying a note from Luttrell, went down to seek help from Camp Blessing, a Marine outpost several miles away, and approached First Lieutenant Matt Bartels with his information.[18]

With this news, the U.S. forces drew up extraction plans which according to Lt. Col. Steve Butow were "one of the largest combat search-and-rescue operations since Vietnam".[11] As the rescue teams closed in upon the village they ran into Luttrell and some of the villagers who were moving him from one hiding place to another.

Six days after the operation, an American search team located Murphy's body as well as the body of Dietz. For the next four days, they held out hopes that Axelson might be found alive.[12] 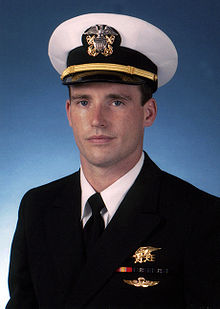 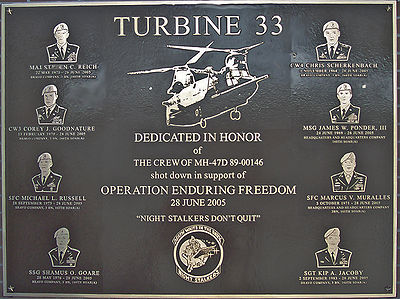 Army plaque in memory of the fallen Night Stalkers

In April 2008, Ahmad Shah, who was the target of Operation Red Wing, was killed during a shootout with Pakistani police in the Khyber-Pakhtunkhwa.[20]

On June 28, 2008, Luttrell and the family members of soldiers killed overseas were honored at a San Diego Padres game.[21] In addition, the United States Navy Parachute Team, the Leap Frogs, brought in the American flag, the POW/MIA flag and the San Diego Padres flag. The attendees were given a standing ovation by the more than 25,000 there to watch the game.

A statue entitled The Guardians stands in the Cupertino Veterans Memorial Park, in Cupertino, California. The statue depicts both Matthew Axelson and James Suh, natives of the region, standing back-to-back.[22]

There exists some conflict over the exact numbers of Taliban forces involved in the engagement. In Luttrell's own official after-action report filed with his superiors after his rescue, he estimated the size of the Taliban force to be around 20–35. Official media reports from the military estimated the size of the Taliban force to be around 20 as well, while in the Medal of Honor citation for LT Mike Murphy, the Navy cited 30–40 enemies.[23] In the Summary of Action related to the same MOH, the Navy cites an "enemy force of more than 50 anti-coalition militia".[24] In his book "Victory Point: Operations Red Wings and Whalers – the Marine Corps' Battle for Freedom in Afghanistan", military journalist Ed Darack estimates the strength of the Taliban force at only 8–10, compared to the more than 200 claimed by Luttrell in his book. Darack's estimate is based on research sourced from intelligence reports, including aerial and eye-witness studies of the battlefield after the fact, including the men sent in to rescue Luttrell, as well as HUMINT from Afghan intelligence.[25][26]