Operation: Leakspin was conceived by Anonymous, with the purpose of sorting through recent WikiLeaks releases to identify and raise awareness of potentially important and previously overlooked cables.[1]

When the Dutch police arrested a 16-year-old[2] for personally creating a substantial botnet and independently conducting a DDoS attack on websites such as Mastercard.com and Visa.com,[3] a subset of those present and involved at the time decided to move towards more long-term-viable goals such as promoting dialogue and spreading the reach of the WikiLeaks cables.[4]

The name is a pun on the "Leekspin" joke animation.[5]

As with all actions by Anonymous, it has arisen in an ad-hoc fashion and holds neither a centralized leadership nor an enforceable command structure.[6]

Due to the decentralized nature of the project, several independent websites are participating in the effort. It is not clear how much co-ordination, if any, exists between these sites. A list follows: 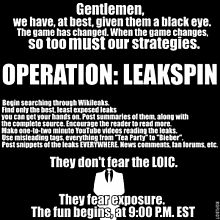 Leakspin represents a sharp departure from the tactics of Operation Payback. Rather than attacking perceived enemies of the pro-Wikileaks movement, the sole focus is on propagating material determined to be of public interest.[13] This potentially could lead to media outlets and the general public focusing on the issues uncovered by the released diplomatic cables rather than the morality or sensibility of DDoS attacks as a form of protest or Julian Assange's current legal travails.

It is not clear if Operation Leakspin participants and organizers are working towards a massive global protest movement, such as Anonymous's Project Chanology. Several Wikileaks-themed demonstrations have occurred globally, but appear to be isolated movements.[14]

It is difficult to ascertain how much support Operation Leakspin has garnered in the Anonymous community.

Although Wikileaks and Julian Assange are potentially being targeted for criminal investigations in the United States in connection with releasing classified documents,[15] there is no real possibility that Leakspin participants could be at legal risk in the USA due to the protections inherent in the First Amendment of the U.S. Constitution. Although arrests have taken place in connection with other pro-Wikileaks actions,[16] there have so far been no reports of any Leakspin websites or activists being investigated.